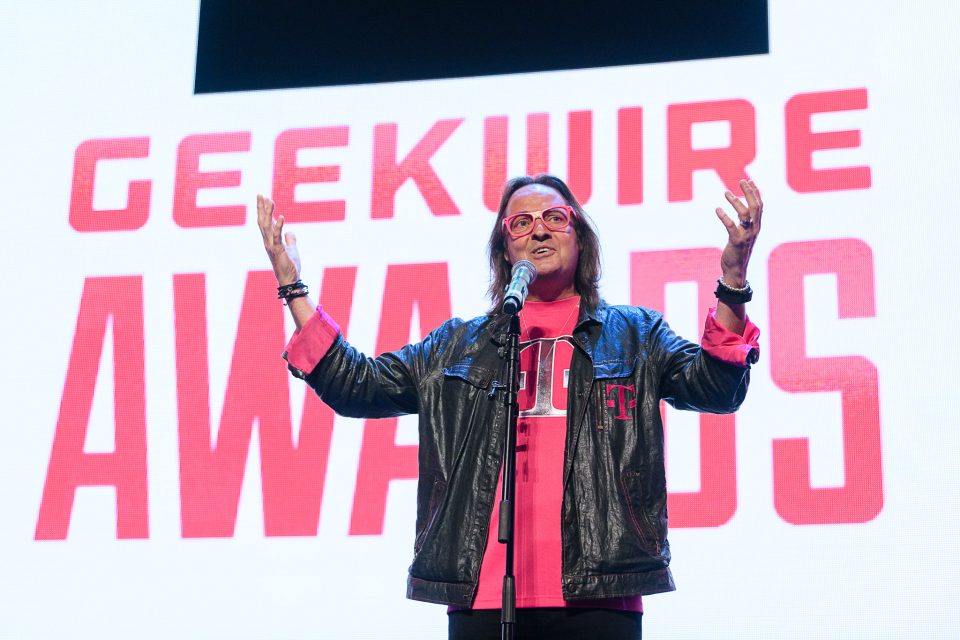 Former T-Mobile CEO John Legere certainly spent a good amount of time on Twitter when he was running the Bellevue, Wash.-based wireless carrier. Would that make him a suitable candidate to sit atop the social media giant’s C-suite?

Cramer tweeted at new Twitter owner Elon Musk on Sunday, telling Musk to “please consider” Legere as CEO of the company that Musk took over two weeks ago.

Musk didn’t seem too enthused with the idea. He replied in a tweet of his own to Cramer, “Umm … no.”

Legere made a name for himself during 7 1/2 years at T-Mobile as a brash-talking, competition bashing, Sunday slow-cooking style of CEO. His magenta sneakers were only upstaged by the profanities he casually lobbed at the likes of AT&T and Verizon.

Legere announced he was stepping down from T-Mobile in November 2019 and in April 2020 he left the company’s board. He said at the time that he wasn’t retiring and that he had “30 to 40 good years and five or six more acts in me.”

At the 2014 GeekWire Summit, Legere discussed how his engagement with social media (and customers) was key to T-Mobile’s “Uncarrier” moves.

“The truth is, I learn almost everything I need to know to run T-Mobile in there,” he said of Twitter at the time. “I take every Tweet that comes in and I read it. I forward it to people. My executive team gets them, we reply, and at my staff meeting every Tuesday, we track social media impressions, what they are and how we’ve responded to them. It takes a ton of time, it’s a lot of fun. You got to be real, and you got to be out there. But I am having a ball with it.”

Musk, who is already running Tesla and SpaceX, appears to have no desire to relinquish the top job at Twitter. But it does sound like his work is piling up.

“I have too much work on my plate, that’s for sure,” Bloomberg quoted Musk as saying Monday during a virtual appearance at B20 Indonesia. “I’m working the absolute most that I can work — morning to night, seven days a week.”

Maybe Cramer has a point.