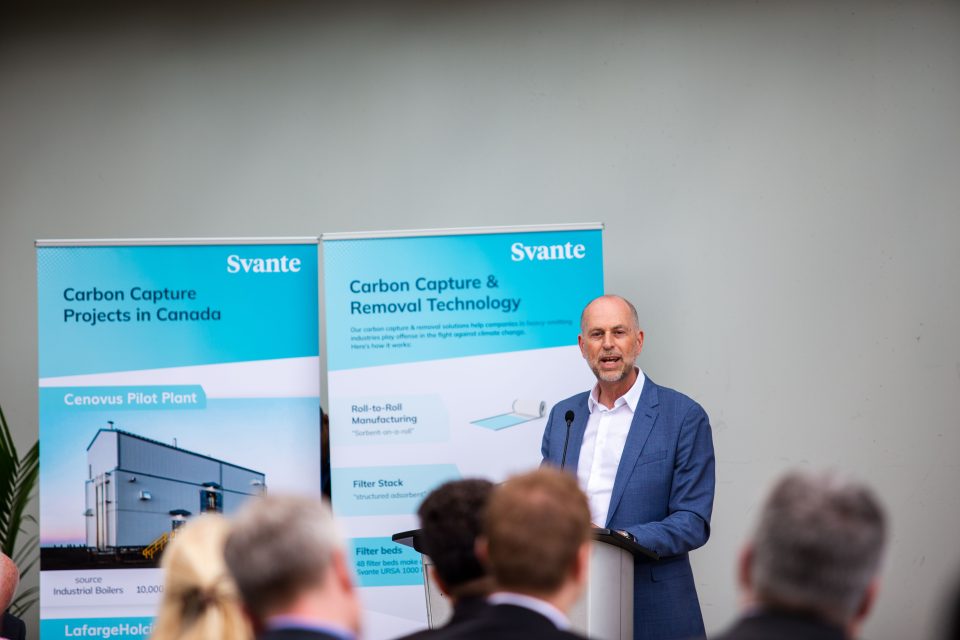 British Columbia-based Svante has raised a $318 million Series E round. The funding was led by Chevron New Energies, a division of the fossil fuel giant Chevron.

The new funding will help the company build two commercial-sized carbon filter manufacturing facilities, according to a Svante spokesperson. In June, the company held a groundbreaking event for construction of its new headquarters and manufacturing site in Burnaby, located just east of Vancouver.

“We are working to remove the biggest barriers to rapid deployment of industrial carbon capture by building this manufacturing facility, which we expect will enable us to rapidly expand our order book,” said Claude Letourneau, president and CEO of Svante, in a statement.

Svante’s technology uses filters coated with nano-material solid adsorbents to trap carbon dioxide that is released with industrial flue gas. The CO2 is then concentrated for storage or industrial uses. The technology is suitable for a range of applications, the company said, including the production of hydrogen, pulp and paper, lime, cement, steel, aluminum and chemicals.

The technology is not yet commercially available. It’s currently being deployed at three pilot facilities:

Svante’s technology can also be used for “direct-air capture,” which is pulling CO2 from the air that’s all around us — a trickier task than absorbing it from a concentrated source.

The company’s latest round included an additional 13 investors, tapping funds affiliated with the 3M Company, Samsung and United Airlines and others.

Svante’s big round is one data point in a banner year for the carbon removal and storage sector.

While carbon removal efforts are scattered worldwide, the Pacific Northwest is engaged in the carbon capture space through multiple avenues.

Microsoft has been a corporate leader in pursuing carbon removal, including investments in the carbon capture company Climeworks as well as forestry- and soil-based capture. Amazon has used its Climate Pledge Fund to invest in Pachama, a company developing tools for tracking carbon offsets.

Even with the progress being made to develop new technologies for carbon capture, it still represents only a drop in the emissions bucket. The total impact of existing and proposed carbon capture and storage projects totals 244 million tons of carbon annually, according to Global CCS Institute.

That comes to less than 1% of the estimated 36 billion tons emitted last year, Bloomberg noted.