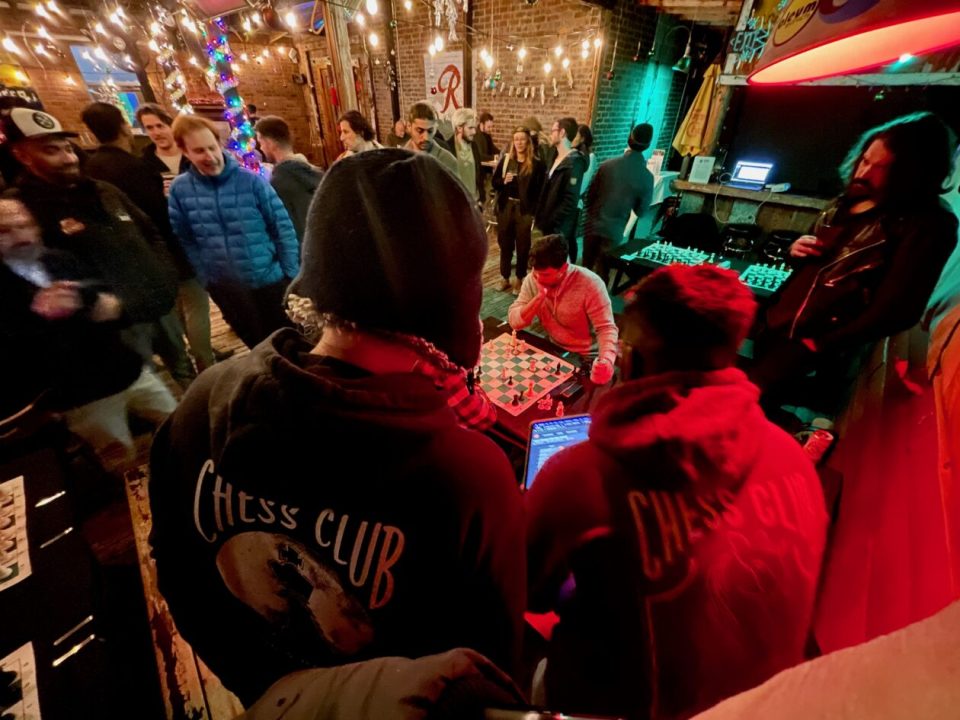 Unlike Fight Club, the first rule of Chess Club is apparently to talk about what happens in Chess Club, promote it, support it and enjoy it. And it all seems to be working.

While millions of players are connecting online at sites like Chess.com, Seattle’s phenomenon is a thriving example of how over-the-board play and in-person connection are a necessity, especially coming out of the COVID-19 pandemic. The club’s faithful have been gathering to play the game at a handful of bars across the city for four years.

Chess Club is now active at Linda’s Tavern on Capitol Hill, Black Cat in Belltown, Big Time Brewery in the University District and King’s Hardware in Ballard. More than 200 people a week, or about 50 per each establishment’s designated night, are playing as part of the club, which attracts everyone from beginners to varying levels of masters.

On a recent Thursday night at King’s, a bar situated along the heart of bustling Ballard Avenue, Chess Club organizer Finn Raftery poured himself a beer from a communal pitcher. Dressed in a black Chess Club hoodie and aviator hat, he yelled over the music to tell players how the night would unfold.

“We’ve got a tie breaker over here!” he shouted at one point as two men competed to stay in a tournament that some of the more experienced players were engaged in. “You guys wanna see some sh*t?!”

Raftery grew up playing chess in Seattle. He graduated from Nathan Hale High School and then the University of Washington, where his chess-playing father Adrian Raftery is a professor of statistics and sociology.

Now a program manager at Microsoft, the younger Raftery started Chess Club with a small group of friends while living on Capitol Hill in 2018. They bought some boards and would leave them at Summit Public House. They hung up an occasional flyer to attract people in the area, and six to 10 people would show up to play.

“I’ve always found that it was a really nice way to meet people in the neighborhood,” Raftery told GeekWire. He considers chess to be an antidote to the so-called “Seattle Freeze.” “It’s not just about chess, it’s really about community. There’s a kind of a mechanism to making instant friends — and a lot of them — because you’re playing so many different games.”

The early iteration of the club continued until the pandemic arrived and proceeded to shut everything down.

“That was a disrupter, to say the least,” Raftery said.

A small group continued to meet at outdoor spaces “for our own sanity,” and when other bars started to open after the first wave of the health crisis, Raftery and company moved to The Lookout, another bar on Capitol Hill, where they played on a front patio. People took notice.

“People were walking their dogs or just kind of milling about, getting out of the house, trying to stretch their legs from working remote, and saw that we were doing chess,” he said.

The timing was great. Popularity in chess was rising due in part to people who were cooped up inside and turning to Chess.com for online matches. At the same time, the popular Netflix miniseries “The Queen’s Gambit” was streaming.

“It was kind of this one-two punch and we just happened to be set up outside playing casual chess with a couple buddies,” Raftery said. “Before you know it, it became like a real thing on Mondays. You couldn’t get a board. The bar was filled up. It was the place to be.”

Raftery realized they were outgrowing the single-bar space. They formed the Chess Club LLC with the idea that they would follow the Geeks Who Drink pub trivia model, charging bars a flat fee in exchange for bringing in people to eat and drink on the slowest night of the week.

Chess Club has no membership dues and there are no signups. You just show up and play with equipment that the club stores at each establishment.

A boost for the bars

Adam Szafranski is brand manager for The Derschang Group, which operates Linda’s Tavern and King’s Hardware. He oversees all marketing and creative events and said Raftery originally reached out via Instagram when looking for a bigger venue on Capitol Hill.

Linda Derschang thought the idea was “really weird and really cool,” according to Szafranski, and they set up a meeting with Raftery.

“His slogan that sold us was, ‘A drinking club with a chess problem,’” Szafranski said during club night at King’s last week. “Immediately we were like, ‘Let’s do this.’”

The bars set aside some dedicated space for chess players and try to create an equilibrium for those who are there to do traditional bar stuff — drink, eat, socialize.

“It’s a very communal, welcoming environment that Finn and the people he works with have created,” Szafranski said. And it’s a beneficial one for Linda’s and King’s, which have seen “really good” numbers on the nights when chess is played compared to those same nights pre-pandemic.

The club attracts “mostly tech workers,” according to Raftery, and skews heavily male. At King’s on Thursday night, more than 50 people showed up to play, with 16 skilled players taking part in the tournament.

Adithya Solai, a software engineer for Amazon Web Services, was serving as tournament director, darting from table to table with his open laptop as he managed a bracket of the night’s matchups.

A recent college graduate, Solai started playing chess when he was 5 years old. He said he wouldn’t describe himself as a “really good player,” but said his organizer credentials are “crazy.” He was chess club president for two years in high school; he ran an 85-person tournament in his hometown of Princeton, N.J.; and he worked as a chess tutor for kids.

“The way we envision it is to keep our lively vibe to chess, and not a stuffy library vibe,” Solai said.

The vibe was anything but stuffy.

Raftery’s enthusiasm for chess is contagious and he brings a tireless attitude to what is essentially a second job, organizing the club at four bars four nights a week, answering queries online, and hanging flyers in every neighborhood.

“There’s no turning back!” he said about the growing endeavor. “And what I’ve seen happen now is a lot of people just show up that don’t even play. They just hang out because it’s like a social scene in a lot of ways. It’s really exciting to see that.”

‘Something a little more mentally stimulating’

Hanging out in a bar in 2022 and talking to people about playing one of the oldest games on the planet seems like an odd juxtaposition.

But chess is not having any trouble staying relevant and in the news. An alleged cheating scandal this fall rocked the upper reaches of the sport and called into question the rise of technology and artificial intelligence and their impact on how people prepare for and play the game.

The players at King’s, moving pieces across vinyl boards with one hand and tipping pints of beer with the other, seemed far removed from such concerns.

John Demery, who works in the semiconductor industry, was playing a game at King’s with his sister in law, who picked up chess eight days earlier. Demery played in elementary school and started playing again recently.

“My roommate and I got sick of watching movies every night and wanted to do something a little more mentally stimulating,” Demery said. “So we cancelled cable and picked up a chess board.”

Chris Lamb, a math teacher at Newport High School in Bellevue, Wash., has been playing on and off for 10 years and helps with the chess club at school. He plays once a week at King’s or Black Cat and while he figured he might lose in the tournament, he thought he could hold his own and not go down easy.

Joe Alcorn, a pilot with Delta Air Lines, rolled into King’s with his flight bag after just arriving back in Seattle.

He started playing with Chess Club a year after it started and, with the exception of New York, hasn’t seen anything like it elsewhere across the country. Playing chess online “helps the addiction,” Alcorn said, but meeting people over the board is what it’s all about.

Asked whether any part of chess is like flying an airplane, he mentioned “planning ahead” and said “every flight is different, every game is different. You’ve got to rely on your experience to get to the end.”

4 Symptoms of a Bad Control Arm (And Its Replacement Cost)