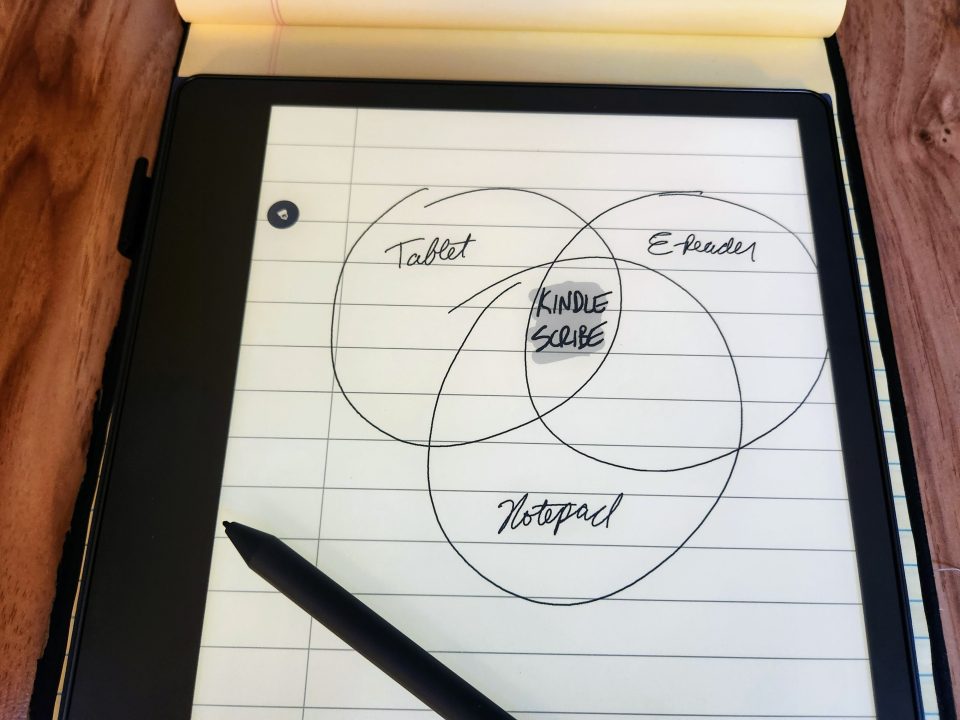 For many years, I’ve tried various tech alternatives to my trusty yellow notepad: Microsoft Word and Google Docs, OneNote on a Surface Tablet, Evernote on the web and smartphone, Samsung Galaxy Note Plus with stylus, etc.

But for me, there’s nothing like the old-fashioned art of scribbling on paper as a natural way of taking notes. I always find myself going back to the good old yellow pad, for all of its analog shortcomings.

Will Amazon’s Kindle Scribe be any different?

To find out, I pre-ordered a 32GB Kindle Scribe (Amazon’s first e-reader that you can write on), choosing the premium pen option, for a total of $390, or almost $430 with tax. It didn’t arrive on release day as promised (it was a couple days late) but I’ve now spent several days using the Scribe to decide whether to keep or return it.

So far, I’m torn. Here’s a page of Kindle Scribe notes summarizing my experience (and other random observations), which I’ll elaborate on below (in typewritten text for anyone unable to decipher my scribbles).

Writing: The writing experience feels almost as satisfying as writing on paper. There is just enough friction on the e-ink screen to create the feeling that you’re scribbling. Any lag in the ink is so small that it’s barely noticeable. Especially compared with an LCD screen on a standard tablet, this feels almost like the real thing.

Virtual pen options: Amazon offers a nice variety of virtual ink thicknesses. I settled on “thin” as my preferred pen weight. For reference, that’s what I used to write the document above.

Pen hardware: The premium pen seems worth it, primarily for the built-in eraser, which means you can just flip the pen over to erase something rather than manually selecting the eraser mode from the on-screen menu. The customizable button, which defaults to the highlighter, is a nice addition but the killer app is the eraser.

E-book integration: Although it’s not the primary reason I’m trying the device, Amazon’s main competitive advantage in this market is its long history in e-books. The ability to scribble notes while reading a book is a nice bonus, although not without its shortcomings (see below).

Screen size: The 10.2-inch screen is a sweet spot: small enough to be portable, but large enough to write without feeling constrained. And overall, my notes are way more accessible in this format than scattered around my office in various paper notepads and notebooks.

Inconsistent approaches to annotation: With some file formats (such as imported PDFs) you’re able to scribble directly on top of a page. In other cases (such as e-books) you instead use a “sticky note” that opens in a window in the bottom of the page. Yes, this provides more room than writing in the margins, but it would be nice to have the option to do either in any situation, no matter the file format or scenario.

Lack of basic file management: Want to insert a new page between two existing pages? Move a page from one notebook to another? Cut and paste a selection of handwriting? Share an individual page rather than send an entire notebook? These are some of the things you can’t do on Kindle Scribe.

Inadvertent page turns: As with many other devices of this kind, Amazon uses palm rejection technology to recognize when your hand is resting on the screen, rather giving some kind of navigational input. But something about the way I hold or move my hand when I write makes the device turn the page inadvertently at times. I’m still trying to figure out exactly what I’m doing to cause this.

Email sharing and Send to Kindle: To transfer documents back and forth between Kindle Scribe and a computer or device, you email a PDF of a notebook, or send files to Scribe using Send to Kindle. This tool is much improved and simplified since I last used it, but this multi-step process illustrates one of the downsides of Amazon not having its own PC operating system or smartphone platform with which to integrate natively and sync seamlessly.

Battery life? I charged this device fully on Saturday, and it was at 50% at mid-week. Amazon says, for writing, a single charge should last up to three weeks based on a half-hour of writing per day, with wireless off and the light set to level 13 brightness. I do have it connected to WiFi, and yes, I have been using it more than a half-hour a day in my testing. I’ll try turning off the WiFi and seeing how it goes in the days and weeks ahead.

Sticky notes disconnected in export: As an experiment, I sent a web page to the Kindle Scribe using a browser extension. I marked it up using the sticky notes feature mentioned above, with each note linked to a specific snippet of text. But when sharing the annotated page back to my computer, the resulting PDF separated the sticky notes from the associated text, placing them all at the end of the document, making it difficult to see what they were referring to.

Left-hand bezel: I’m sure there are good technical reasons for the thick bezel on one side, and I understand that it comes in handy in certain scenarios for reading (similar to the Kindle Oasis) but it feels unnecessary for my purposes, at least based on my experience with the device so far. I’d prefer a thin bezel all the way around.

It’s important to note that my exploration of this category isn’t complete. I haven’t used existing competitors to the Kindle Scribe, most notably the reMarkable 2.

But the question at the outset was more basic: can the Kindle Scribe replace a notepad? For me, the answer right now is maybe. There’s a lot to like, and a few things that give me pause.

Many of the shortcomings have the potential, at least, to be addressed with future software updates. The ability to move, reorder, and export individual pages would be top of my list. Given recent cutbacks in Amazon’s Devices & Services division, I’m not counting on it. Amazon declined to disclose its product roadmap, naturally.

I’m going to keep using the Kindle Scribe for a few weeks and make a final call before my return window is up at the end of January. In the meantime, I hope my experience so far helps others out there who are contemplating something similar. Email [email protected] with any feedback, questions, or insights.