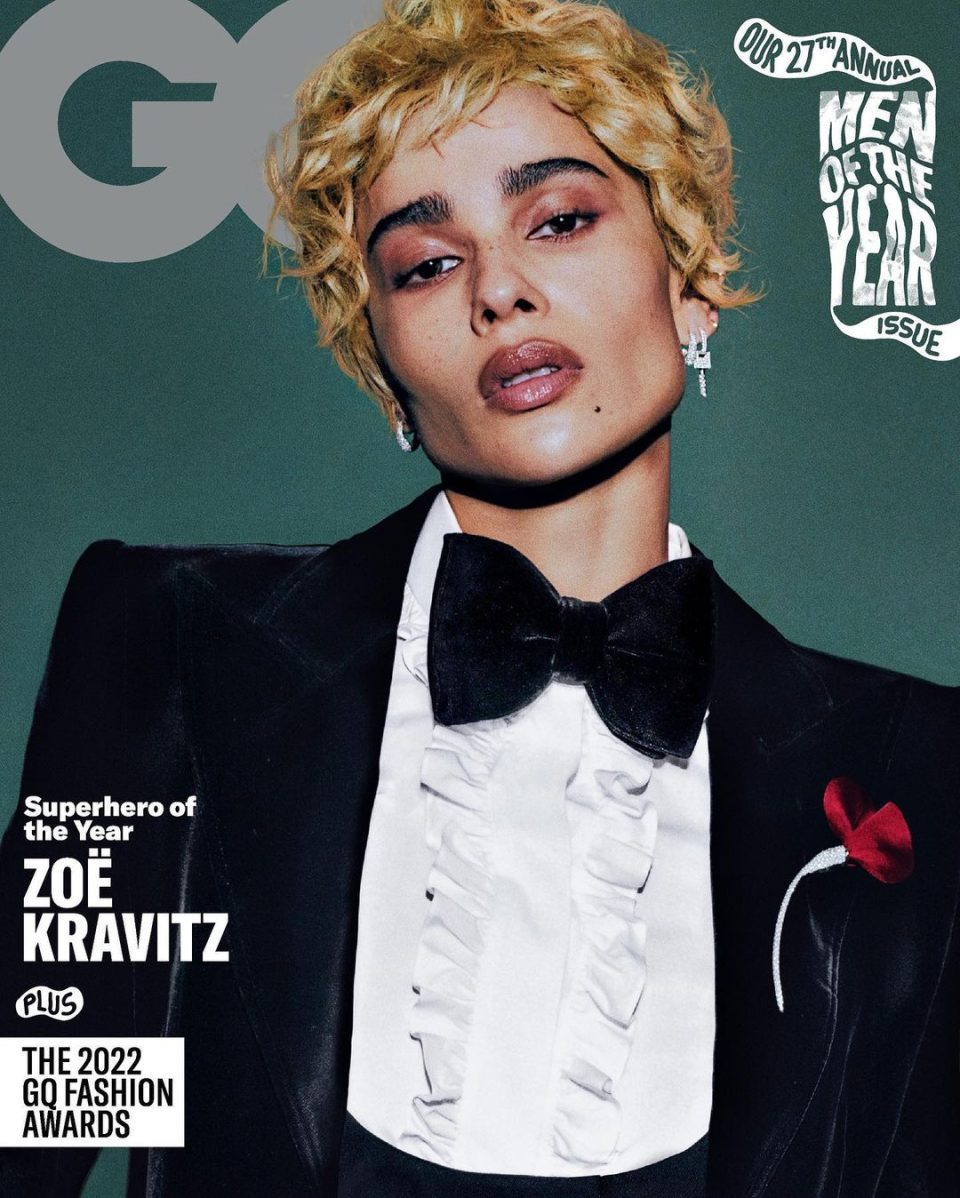 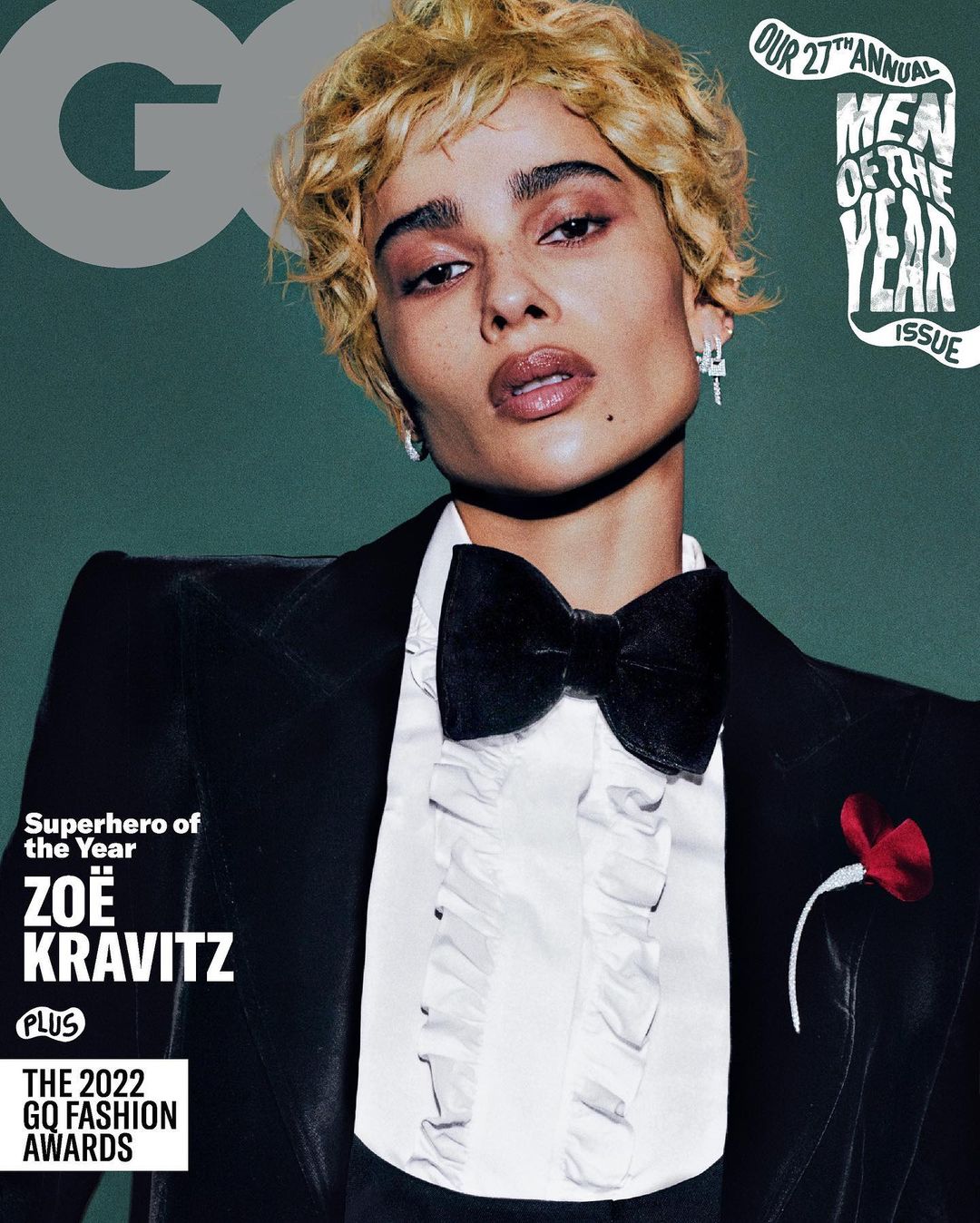 Zoe Kravitz covers one of the covers for the December issue of GQ, the Man of the Year issue. She’s GQ’s woman of the year, following the success of The Batman and her foray into directing, with P-ssy Island coming out next year. GQ kind of glosses over the fact that Zoe was ripped apart online after she got huffy about the Oscars slap – she basically went dark on social media for several months afterwards and “went away” for a bit, now she’s back on her bullsh-t. She does talk about her still-on relationship with Channing Tatum, and during the interview, she wore a “mammoth emerald pinkie ring” which was given to her by “Chan.” You can read the GQ piece here. Some highlights:

Playing Rob in Hulu’s ‘High Fidelity’ series: “What was interesting is I had to really fight the producers in a lot of ways to let me be as toxic as she was. They really wanted to dull things down. Even at the end of episode two, when I screamed, ‘What f–king Lily girl?’ they were like, ‘Can you be less angry?’ Or when I fantasized about beating the sh-t out of Lily, they were like, ‘It’s so violent.’  They wanted it to be this cute, likable version of this piece-of-sh-t character. The point was to show that women could be pieces of sh-t too.”

When ‘High Fidelity’ was canceled: “If you make something and no one liked it and it’s not good, then it makes sense. But when people connect to it, it’s sad. I felt really out of control.” Kravitz has long been plagued by a fear that the phones will stop ringing and she’ll never work again, which didn’t help matters after the show’s cancellation. “My agent thinks I’m insane. But I cannot shake that.”

On ‘nepo babies’: “It’s completely normal for people to be in the family business. It’s literally where last names came from. You were a blacksmith if your family was, like, the Black family.”

While filming ‘The Batman’ in London, she spent time with Taylor Swift: “She was my pod. She was a very important part of being in London, just having a friend that I could see and that would make me home-cooked meals and dinner on my birthday.”

While she plays Catwoman, she’s a dog person: “I think cats are bitchy and complicated and difficult, and I’m totally like that as a person. I don’t want to deal with myself, basically.”

She’s barely on social media anymore: “I definitely have a foot-in-mouth situation. And I shouldn’t always say what I think in the moment, especially because you don’t always think those things forever.”

Turning 30: “There’s something romantic and exciting about being like, Oh, I’m an adult. I stay home and cook now. I bake bread. Then I think you do that for a couple years and you realize there’s still a lot of life to be had. I’m done romanticizing the ‘old is domestic’ thing. It’s cute for a minute and then it’s not.”

Her 18-month marriage to Karl Glusman: “I just learned to think about who I am and what I want. You meet someone who’s amazing and wants to marry you, and there’s nothing wrong with that. If there’s nothing wrong, then why wouldn’t you do it? You love them and that’s what you do. It’s a hard question to ask yourself: ‘Maybe I don’t want the thing that I’m supposed to want, a marriage, children, any of it. I don’t know if I want that at all.’ That’s an uncomfortable question, especially for a woman to ask herself.”

On Channing Tatum: “He’s just a wonderful human. He makes me laugh and we both really love art and talking about art and the exploration of why we do what we do. We love to watch a film and break it down and talk about it and challenge each other… [on the set of P-ssy Island] Whether it was making me tea or pouring me a drink or going to whip someone into shape or whatever—he really was my protector and it was really wonderful and sweet… I think if you can do something like that together, it’s a good test. And we came out even stronger.”

I really like her answer on the Karl Glusman question – she loved him, he loved her, he proposed, they had the big wedding and then after all that, Zoe was like “is this actually what I want?” People are allowed to change their minds! Sometimes what you want at 25 isn’t what you want at 32, or 40 or 50. You’re also allowed to get out of a marriage for any reason whatsoever. That being said, I’ve always sort of felt like there was some overlap between the end of her marriage and the start of her thing with Channing. As for cats… cats are amazing. Cats are not inherently bitchy, although some cats are definitely a–holes.

bitchy | Did Prince William give Kate a pair of £100 earrings for Christmas?

bitchy | Hahahaha, ‘Babylon’ crashed & burned at the box office in its opening week