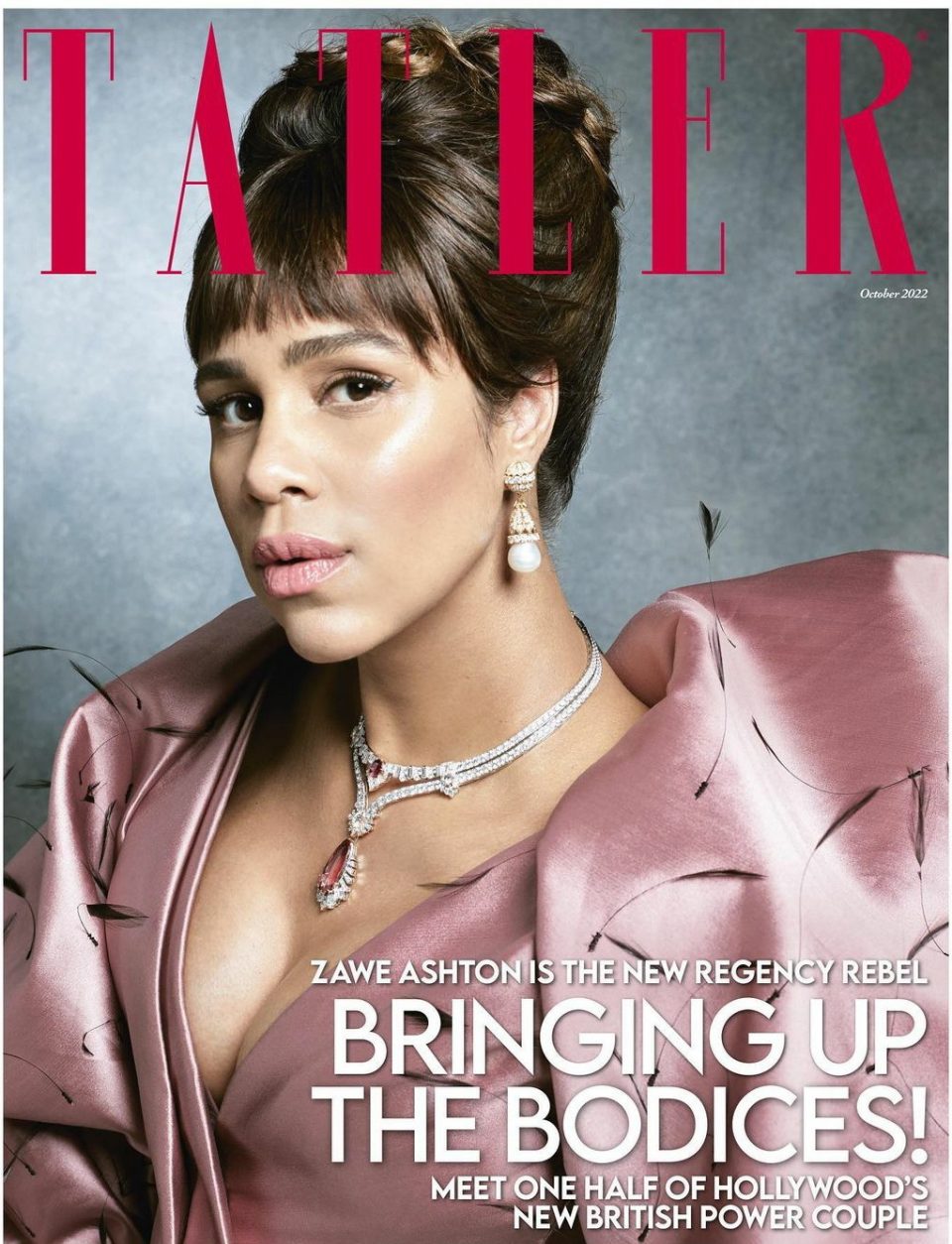 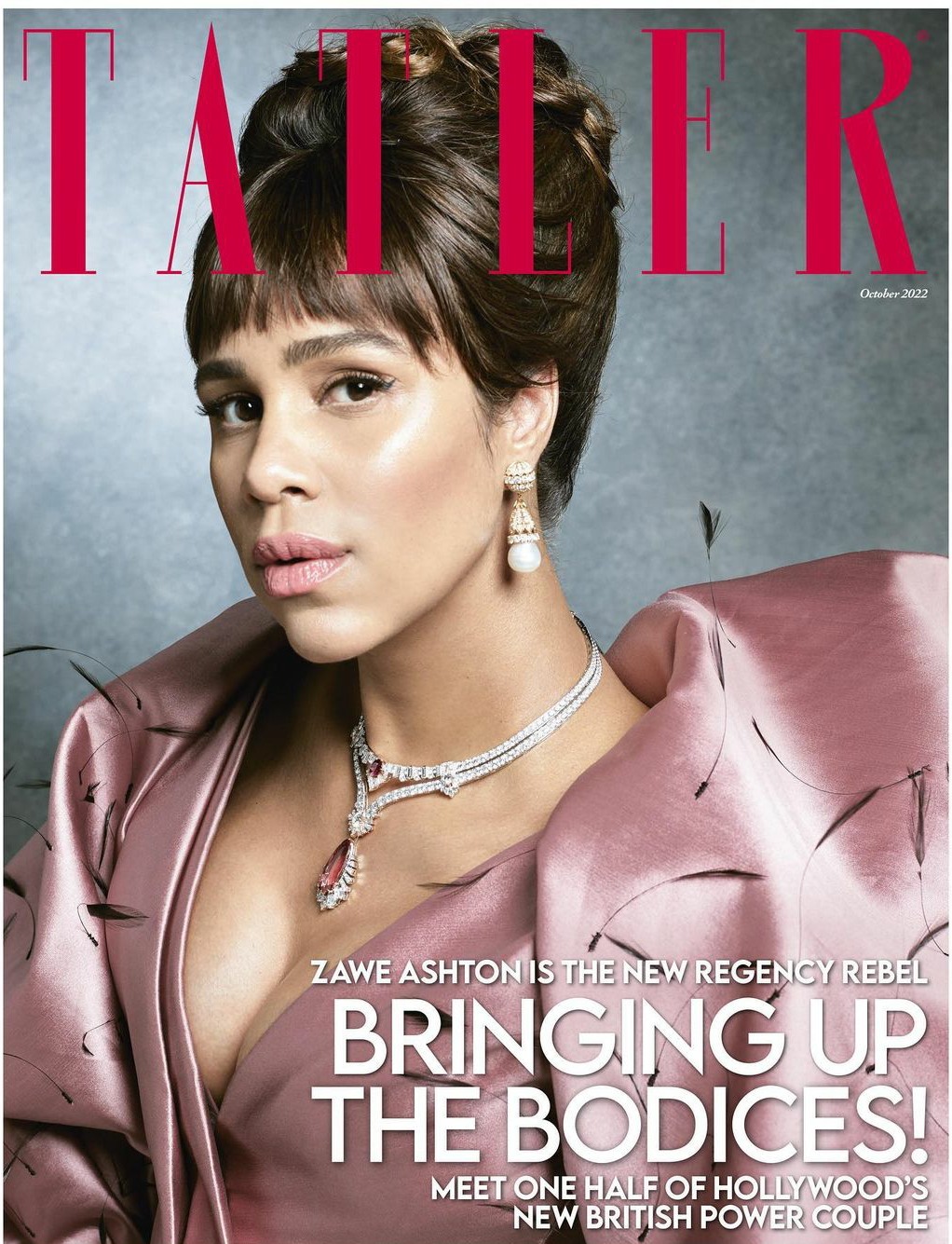 Zawe Ashton covers the October issue of Tatler to promote Mr Malcolm’s List, which is a period romantic-comedy in the vein of Jane Austen or Bridgerton, I guess. Freida Pinto is the lead, but Zawe has a significant role. Zawe is also engaged to Tom Hiddleston and pregnant with their first child. She speaks of that and she speaks around it with Tatler – she has clear lines she doesn’t really want to cross, but she does mention Tom and she’s clearly very pregnant. I’ve always sort of thought that Zawe’s energy is very calm, focused and driven, but I never realized (before now) that she’s actually kind of similar to Hiddles – she’s chatty, upbeat, a bit dorky and “keen.” You can feel her bristling against the hurdles and roadblocks set in her path since birth but she doesn’t come right and say “god, Britain is a terrible place to be a Black woman.” Some highlights from Tatler:

Whether she gets a lot of villain roles: ‘I think that’s probably a phase I’ve always been in – certainly the outsider phase. I’ve always played outliers, and that’s great. I think it’s where you can move the needle the most.’

Summers in Uganda. ‘There’s a lot of strength in having a duality. We’re finally seeing that more and more now as something to be celebrated. When I was younger, that wasn’t the case.’

Bullied in school & at drama school: ‘It was rough. They break you down.’ Why? ‘I think they saw my keenness, my enthusiasm… I don’t know why, but sometimes they really want to wash you out.’

She pitched a show like ‘Girls’ which was in development hell: ‘There was just this weird resistance. And bullying. Bullying, demeaning, gaslighting… I was yelled at by one producer because I was questioning something about my own work.’ I venture cautiously that, to some, Ashton might just have been too much of a multi-hyphenate. ‘Yep. We didn’t do that kind of thing here until the success of things like I May Destroy You or Fleabag.’

She supports other artists: ‘We don’t fuel the fire of genuine enthusiasm in the UK. It’s like, “Don’t get ideas above; stay calm; it’s not that good.” I appreciate that, because I’m London through and through – I love that acerbic quality and I love that edge. But it can be really damaging.’

Working with Tom Hiddleston on ‘Betrayal’: ‘Tom and I had done a reading together of the central scene, at a gala for Harold Pinter’s birthday’.

Pregnant with Tom’s baby: ‘Thanks, it’s wonderful.’ I’d read somewhere that she’d always wanted children. ‘I know… I used to talk about it all the time in interviews – it was really unsuitable.’ Has she learnt the art of discretion now? ‘I’ve got to learn it.’

Pregnant at 38: ‘You’re told, “Don’t get pregnant” but also “Don’t leave it too long” because then you’re going to be an old maid. I’ve been prehistoric in this industry since I was 25. The mixed messaging is rough and has to be addressed.’ She hadn’t felt stressed by her biological clock ticking: ‘It was just suddenly this self-permission comes over you that goes against all that messaging.’

Announcing the pregnancy by showing up with her bump: ‘I don’t want to talk about my personal life. I didn’t feel like I had to do anything… it felt like [the pregnancy news] happened in the right way. [It is a] really, really, vital moment where we’re talking about women and their autonomy when it comes to their bodies.’ The Roe v Wade reversal had been announced just days before, and she had no desire to ‘be cute’ about it. ‘I’m not into “announcements” or “reveals”. I’m into trying to carry the narrative as much as possible myself, rather than anyone else feeling like they have an exclusive on my body.’

Doors are opening for young actors of color: ‘I can see that opportunities for so many under-represented students are suddenly there. I don’t worry about them the way I worried for myself – and that’s really lovely. Systemic racism isn’t going anywhere fast. But they can imagine themselves in huge franchises, in the new Netflix show, in the lead in West End theatres.’

She loves Jane Austen’s books but not P&P: ‘I’m not really a Pride and Prejudice girl’, she frowns. Not into Darcy? ‘No, too austere. People love that. I know friends who are like, “I love how emotionally unavailable you are.” I’m like, “Oh gawd!”’

“We don’t fuel the fire of genuine enthusiasm in the UK. It’s like, ‘Don’t get ideas above; stay calm; it’s not that good’.” As in, don’t get ideas above your station, Britain is still racist and classist and enthusiasm is always suspicious. Tatler has a thing about mentioning the Duchess of Sussex in random interviews but they didn’t in this one. Perhaps because it was too “on the nose.” Because the whole piece felt like one big subweet of Meghan’s experience and culture shock.

And yes, the fact that she’s not into Mr. Darcy makes so much sense. Hiddles isn’t brooding or austere, he’s a big, energetic puppy. Of course, her favorite Austen books are Persuasion and Emma.

bitchy | Eating earlier in the day burns more calories, according to new study