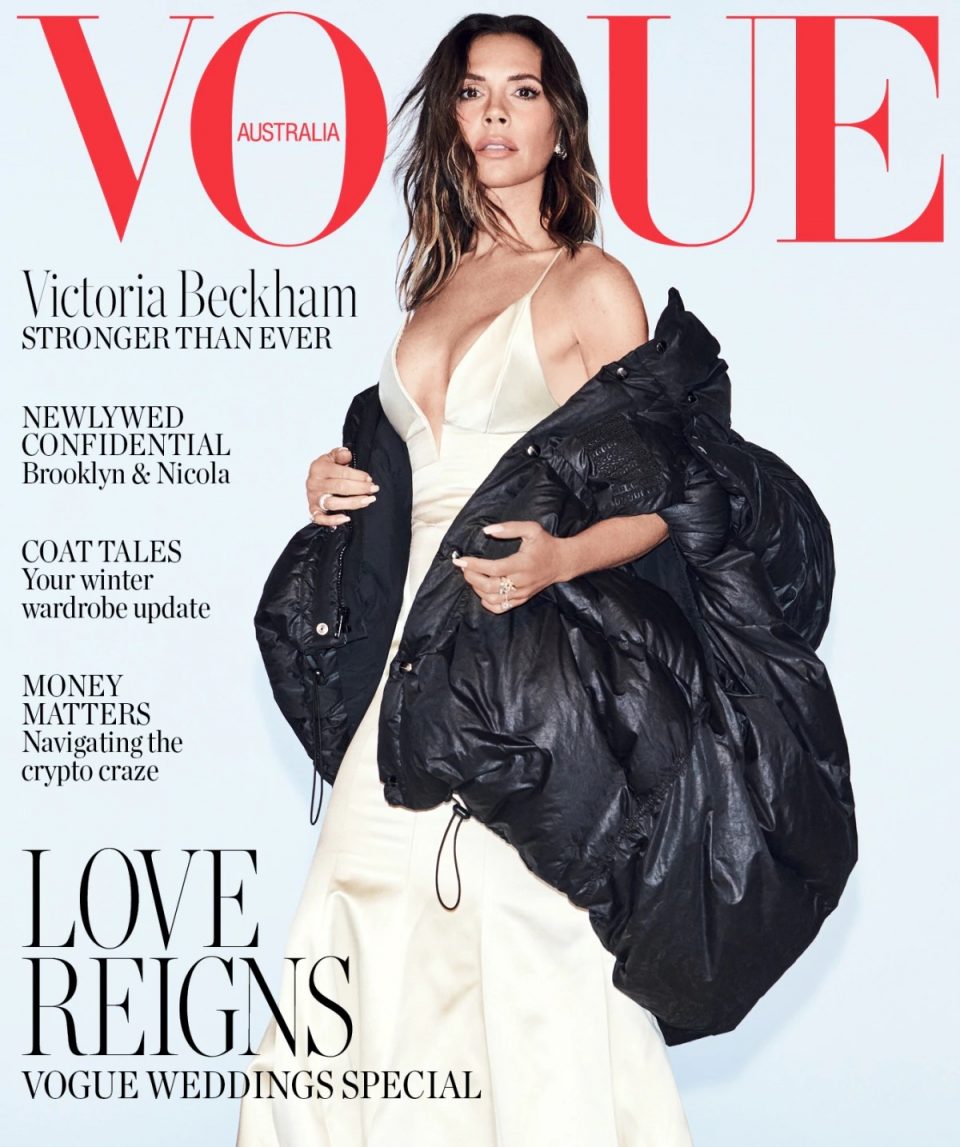 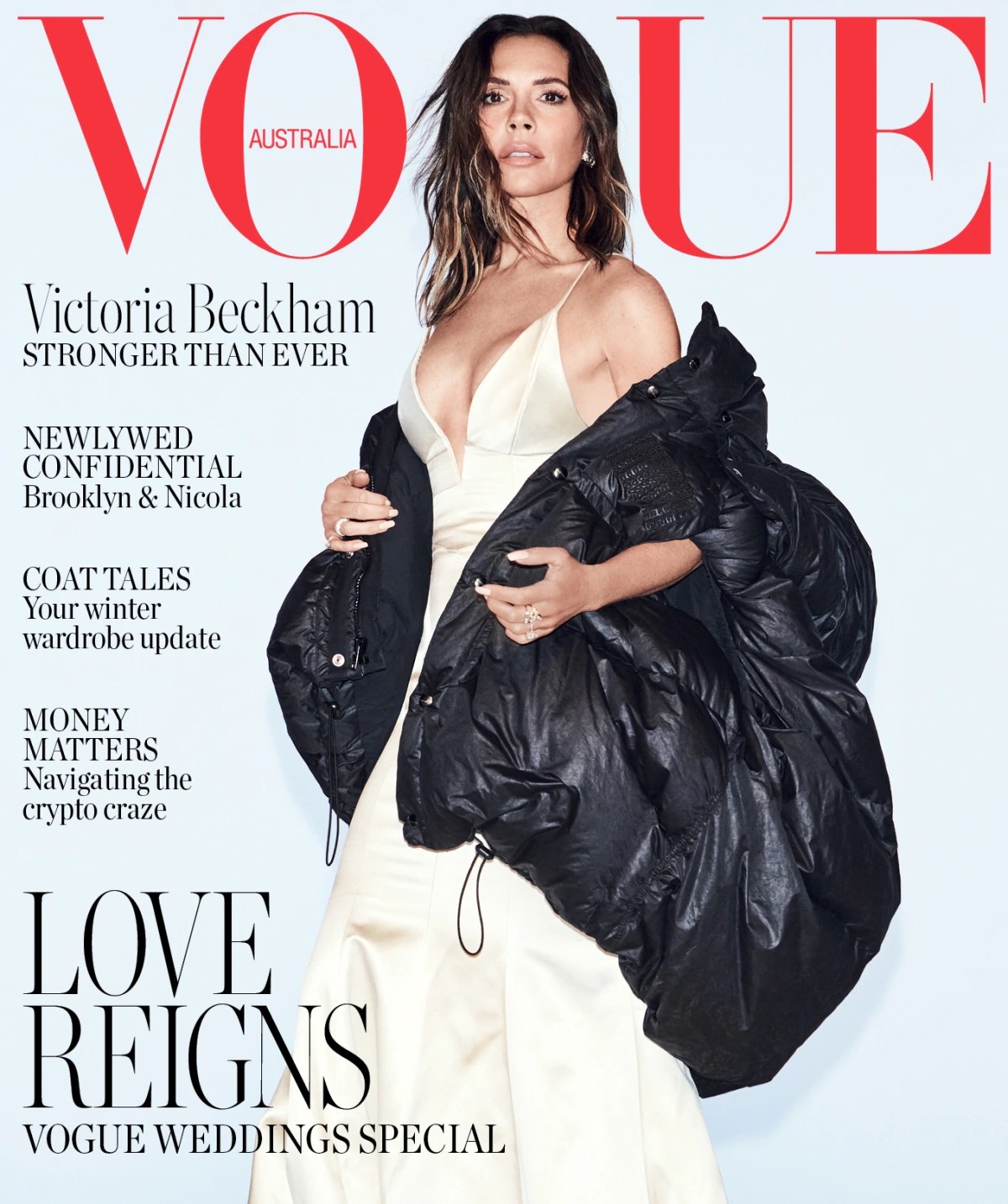 Victoria Beckham is still shilling her latest knitwear collection, which is inspired by living in Miami. That’s the collection of body-con knitwear in muted beiges and creams, and she claims that’s the “Miami look,” and it’s for women with curves. Still, this collection seems to be selling better than previous collections. Victoria’s labels have been up-and-down, mostly down. I’ve heard that David has needed to “invest” in her clothing label several times because the stuff isn’t selling. Anyway, Victoria covers the latest issue of Vogue Australia and she talks about her evolving personal style, her evolving style eye and whether Harper Beckham will ever be allowed on social media. Some highlights:

She auctioned off her old Posh clothes but kept the Hermès bags. “I don’t really miss those outfits, but those Birkins stand the test of time.” She also kept her Tom Ford for Gucci pieces, which she bought with the clothing allowance she got from the record label (“the other Spice Girls weren’t really into fashion, so I was fortunate to be able to take up most of the budget”).

Her Miami-inspired collection: “We had the best day of sales we’ve had in the history of the brand. It’s unbelievable…. There’s definitely a less-is-more attitude to dressing [in Miami] … literally. At first, I found it quite shocking and then I found it quite inspiring. The women there celebrate their bodies and their femininity. I realised that my midi-length pleated skirt and pussy-bow blouse were not quite appropriate for Miami. In fact, they would have probably carted me off to some sort of home if I would have gone out for the night dressed that way.”

She doesn’t mind the global stardom & what it brings to her fashion line: “A lot of opportunity has come my way because of my past. It’s a double-edged sword, but I will never complain about it. Can it be frustrating sometimes? Absolutely. But it can also go in my favour. Are other brands under the scrutiny that mine is under every time we file? Absolutely not. But how many other brands have the luxury of getting the attention when they want it? People are very quick to look at the numbers in fashion, which are public, but fashion and beauty go hand-in-hand, and beauty is one hell of a success story.”

She got tired of her own baggy, oversized clothes: “You know, it’s very much what fashion people do. I wanted to do something different. I decided I wanted to wear more fitted dresses. I wanted to show more skin. I wanted to celebrate the fact that I’m a woman. And I wanted to stop hiding under clothes.”

David recently told people that she only eats grilled fish and steamed vegetables: “I mean, talk about making me sound boring! No. What he meant is that he’s never met anyone who’s more disciplined with the way that they eat. I eat lots of healthy fat: fish, avocado, nuts, that sort of thing. I do drink alcohol, unless I have a reason not to. I’ll detox from anything for three to six months where I won’t drink. I’m quite extreme in anything I do, whether it’s eating or working out or drinking or not drinking.” She takes Augustinus Bader skin supplements, drinks apple cider vinegar first thing in the morning, and puts Skinaide collagen peptide powder in her coffee.

On Harper: “Harper isn’t on social media, so we don’t have to worry about that just yet. But seeing how cruel people can be, yes it really does [concern me]. She’s at that age where her body is going to start changing, but it’s about making sure that we communicate a lot as a family and she surrounds herself with nice friends. But it is quite terrifying, I can’t lie.” While she says her daughter is already an accomplished make-up artist at home, Harper hasn’t taken to skimpy hemlines just yet. “She’s not one of these kids who are going out with a full face of make-up and a crop top. She actually said to me recently, ‘Mummy, I’ve seen some pictures of you when you were in the Spice Girls and your skirts were just unacceptable. They were just too short.’ Then David piped up and said, ‘Absolutely, Harper! They really, really were.’ And she was actually quite disgusted at how short my skirts were. I said, ‘Are you never going to wear skirts like that?’ She said, ‘Absolutely not.’ We’ll see.”

Harper is 10 years old – it’s not that she’s growing up too fast, it’s that she is entirely her age. She’s a little kid, the baby of the family, and she’s utterly adored by her parents (who probably still baby her). What also strikes me – in a good way – is that while they include Harper in their activities and she goes to some of those big events, it’s not a constant thing and she’s allowed to be a kid at those events. Too many celebrity parents treat their kids like little adults and mini-brands. David and Victoria don’t do that… with Harper. Now, the boys were and are treated that way.

As for all of Victoria’s Miami talk, I love how she finds Miami fashion so scandalous. Bright colors, skimpy skirts, tans galore, low-cut blouses, tacky old and new money. I like how defensive she is about her business too – I prefer her defensiveness to flat-out lying, “oh everything is going great!” No, her business has struggled at times and a lot of money has been lost, but she’s figuring it out.