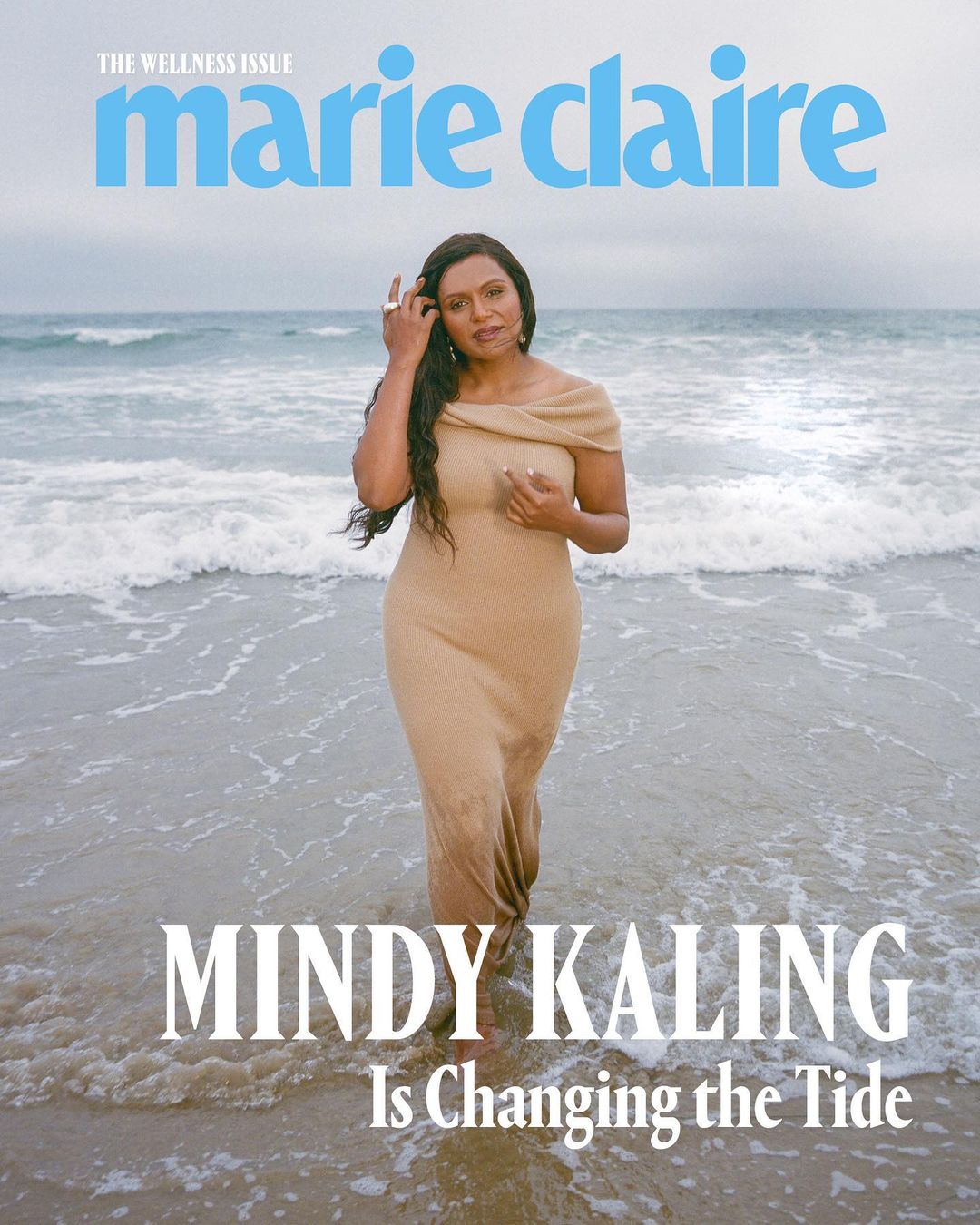 Mindy Kaling covers the September issue of Marie Claire, mostly to promote the new season of Never Have I Ever, but she’s got so much going on right now as a writer and producer. She’s stepped back from acting for the most part, which bums me out. Mindy was an underrated comedy actress, but I get it. Now we just get Mindy’s excellent scripts and productions. Mindy talks a lot about her two kids, being a single mom, mental health and inclusion. Oh, and she bought herself a beach house for her 40th birthday! She reveals that in the interview, that’s incredible. Some highlights:

Her beachfront home. “It was this incredibly extravagant 40th birthday present to myself.”

She won’t discuss her kids’ conception stories. “I want them to be old enough to talk to me about it and [tell me] how they want me to talk about it. I’m the only parent my kids have…I think I err on the side of super cautious so that there’s less things that they can potentially be mad at me about down the line.”

On the rumor that BJ Novak fathered her two children: “[The rumor] doesn’t bother me. He’s the godparent to both my kids — and they have such a great relationship. [The rumors haven’t] affected my happiness at all, it hasn’t affected my kids or B.J. If that’s what is going to be titillating to people, I’ll take it.”

Waiting to have kids: “I waited until I had the means and that made all the difference.” She pointedly addresses the privilege in her statement, noting the recent overturning of Roe v. Wade. “The choice to have a child—by yourself, on your own terms—it was the best part of my life…It’s the thing that I hope women feel confident doing by themselves.”

She wishes young women would freeze their eggs: “I wish every 19-year-old girl would come home from college and that the gift—instead of buying them jewelry or a vacation or whatever—is that their parents would take them to freeze their eggs…They could do that once and have all these eggs for them, for their futures…to focus in your twenties and thirties on your career, and yes, love, but to know that when you’re emotionally ready, and, if you don’t have a partner, you can still have children.”

The shift in her career: “I think in my twenties I was only focused on, Okay, I don’t want to get fired. I want to be successful, and I was only thinking about myself. In no way was I thinking about things that are the most important to me now, which is my health, holding the door open behind me for other people… I kind of lived a way more selfish existence, which is also boring…[Now] I’m surrounded by so many more people. My immediate family, obviously, with my children, but also this community of young women on my show. When I write shows about Indian women and what they’re interested in, I want to do something original, but I also don’t want to shy away from things that I’ve seen before: obsession with success; elitism about schools. Those are things that were real in my family, and I’ve been dealing with that. But also what’s really important was destigmatizing mental health.”

She loves to run: Her mental health is directly tied to “the restorative power of a run,” something she does daily. “I’m always so self-conscious talking about how much I love running because I don’t look like someone who’s athletic or anything. But it has really helped me…It just focuses me and makes me a better writer. I think I’m a friendlier person, a more patient mom.”

Not being on camera has been a significant factor in fueling her wellbeing. “The amount of articles that were like, ‘It’s so good for a culture that this unattractive woman is finally on camera.’ I didn’t know I was so unattractive until I was the star of my own show. So not having to see those things, that’s wonderful.”

She’s a single mom in her 40s, trying to find love: She hasn’t “ruled out romance. Culture largely says, ‘We don’t wanna hear about you. Your entire deal bums everyone out.’ If you’re a 42-year-old [single] woman with kids, it makes people sad… I’m like, ‘There is hope for us. There could be great stories about women, like me, finding love, finding happiness…’ I can’t imagine anyone besides me would write it, so I have to find the time to do that.”

She’s the happiest she’s ever been: “After being so unhappy in my teenage years and in my 20s…I feel so content now. I am so happy with my career. I love my family. I love my freedom—I have the freedom that comes with being financially stable, and I don’t have to run anything by anybody.…I love going to set and watching these actors saying my words and coming up to me and asking my take on things…It’s beyond the wildest dreams that my late-mother could have hoped for me.”

This bums me out: “I didn’t know I was so unattractive until I was the star of my own show. So not having to see those things, that’s wonderful.” I hate to think that’s why she’s stepped away from acting. She’s right though, those articles did exist and so many people were like “wow, they’ll let ANYONE be a romantic-comedy lead, huh?” But I love what she says about financial freedom and choosing to be a single mom and choosing to be the big boss. “I don’t have to run anything by anybody” – that’s a special kind of fairytale too. As for the BJ Novak stuff… I go back and forth on it, but these days, I don’t think he fathered those kids, actually?

GeekWire Summit sessions will explore the future of work – GeekWire

What To Wear To A Babyshower