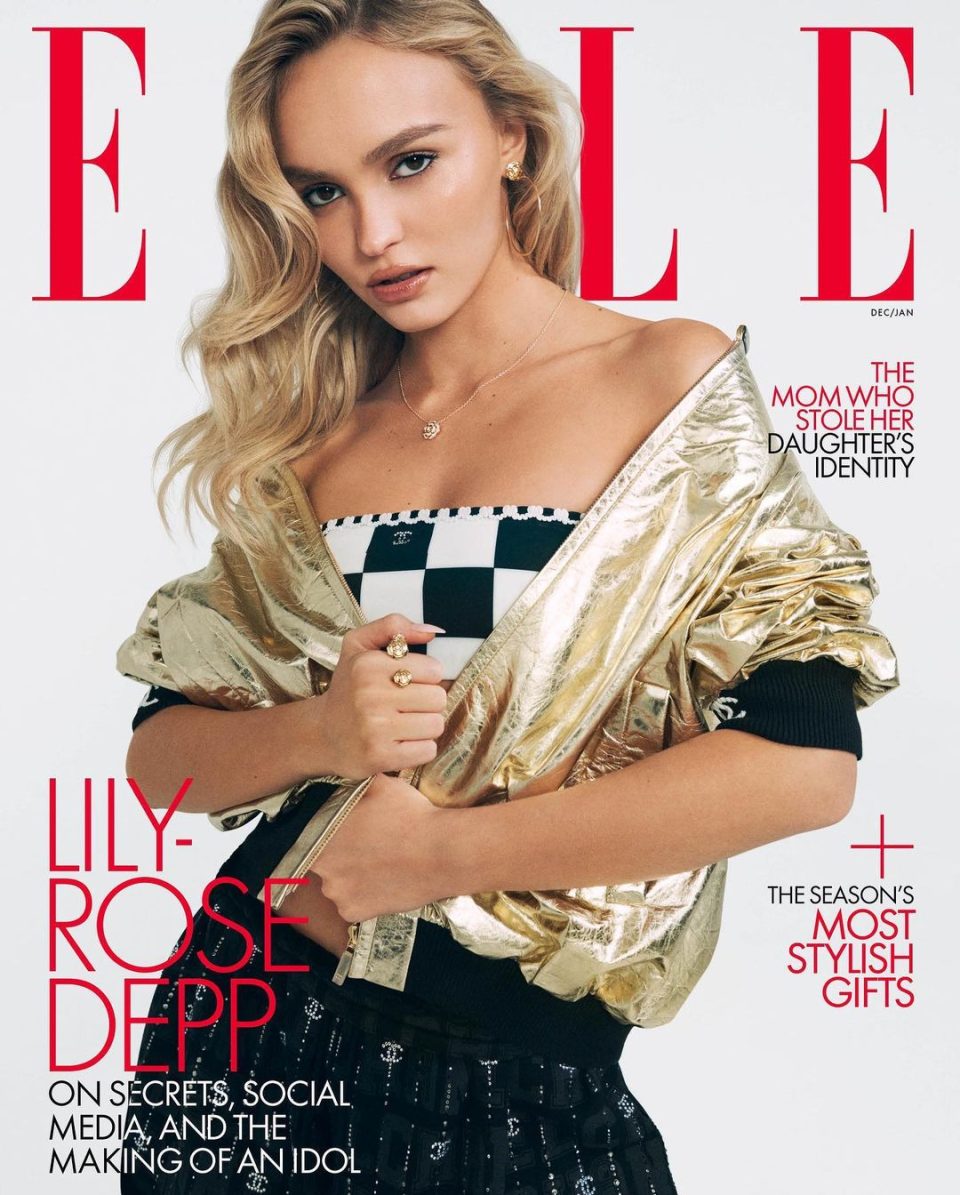 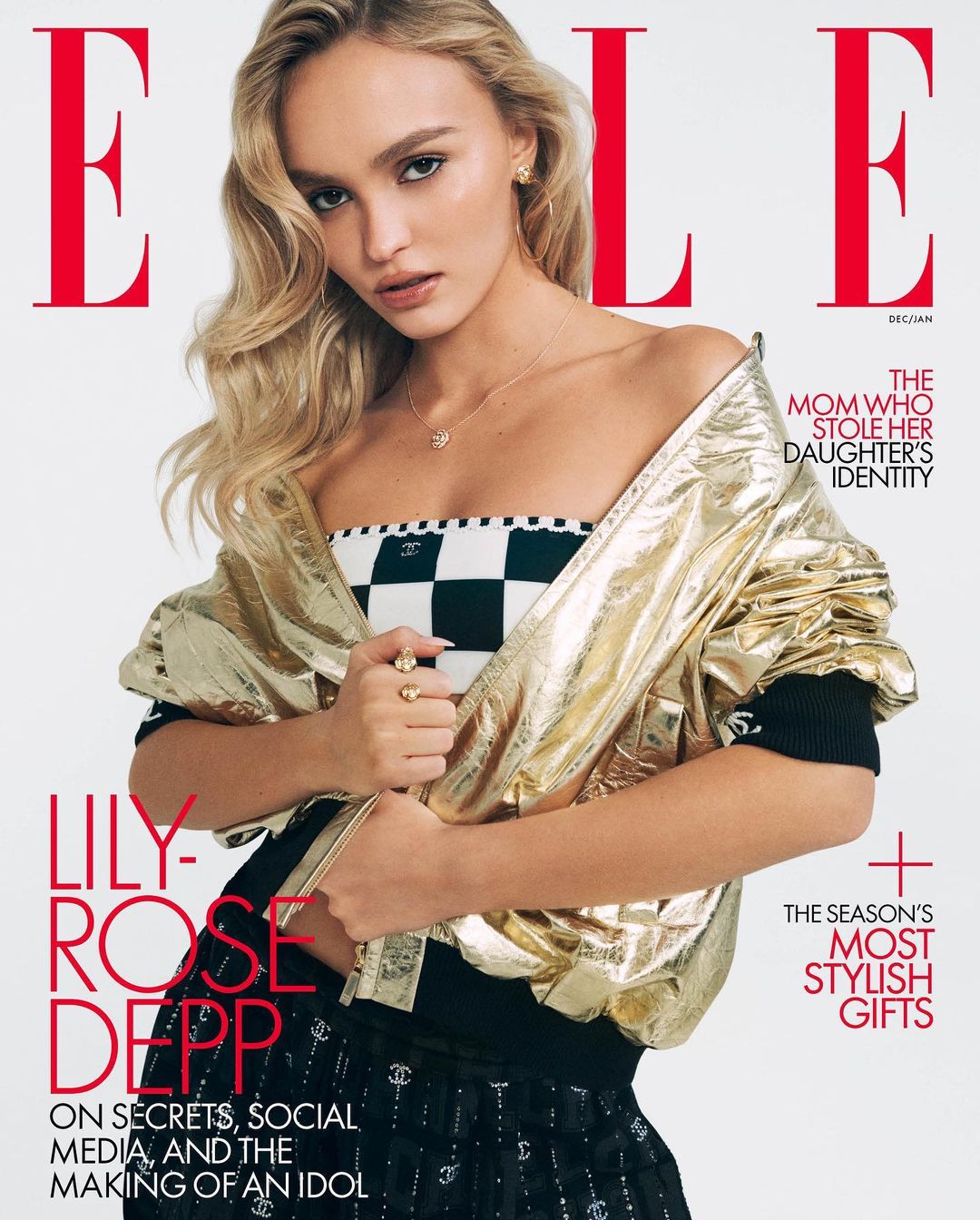 Lily Rose Depp is 23 years old and starring in the HBO series The Idol, where she plays a pop star alongside Abel “The Weeknd” Tesfaye. This is why Lily-Rose covers the December issue of Elle, she’s promoting The Idol and some other projects coming out in 2023. Lily-Rose has said very little about her father and all of his lawsuits and the credible claims of abuse and assault. She’s asked about her silence on her father’s many controversies and she side-steps the conversation for the most part. Which is her right – I don’t feel strongly for or against it, but I’m sure others will feel differently. Most of the interview ends up being about how Lily-Rose wants to be very mysterious, how nepo babies aren’t that bad and how she doesn’t want to live online. Some highlights:

She wasn’t exposed to the fame machine by her parents: “My parents protected my brother [Jack] and me from it as much as possible. I know my childhood didn’t look like everybody’s childhood, and it’s a very particular thing to deal with, but it’s also the only thing that I know.”

On her father’s controversies: “When it’s something that’s so private and so personal that all of a sudden becomes not so personal…I feel really entitled to my secret garden of thoughts. I also think that I’m not here to answer for anybody, and I feel like for a lot of my career, people have really wanted to define me by the men in my life, whether that’s my family members or my boyfriends, whatever. And I’m really ready to be defined for the things that I put out there.”

She doesn’t have Twitter: “because I don’t feel like there’s anything I want to say that I can’t say through my work”), and her Instagram is a sedate chronicle of her past and upcoming acting projects and Chanel ads. She went into her acting career with the idea that “I am here to do my job, and what I really want to put out into the world is my work.”

She’s not giving everything to the public. “It’s kind of a double-edged sword, because when you’re an artist, you make things in the hope that they’re going to connect with somebody. But then it also comes with this thing where people feel like they know you, even though they don’t. I’m not here to give myself to the world to be eaten alive.”

People hiding behind screens: “People think that you’re a video game character and say all these horrible things about you that they would never say to your face. I think we feel a little too protected by our screens. We spend a lot of time on the internet, and you start to feel like it’s this parallel universe where people in the public eye are just an animal in a zoo or a statue, and you can say whatever the f–k you want to them, even though you wouldn’t say it in person.

On “nepo babies”: “The internet seems to care a lot about that kind of stuff. People are going to have preconceived ideas about you or how you got there, and I can definitely say that nothing is going to get you the part except for being right for the part. The internet cares a lot more about who your family is than the people who are casting you in things. Maybe you get your foot in the door, but you still just have your foot in the door. There’s a lot of work that comes after that.”

She thinks the “nepo baby” conversation is sexist: She does find it “interesting,” however, that she rarely hears anyone refer to a man as a nepo baby. “It’s weird to me to reduce somebody to the idea that they’re only there because it’s a generational thing. It just doesn’t make any sense. If somebody’s mom or dad is a doctor, and then the kid becomes a doctor, you’re not going to be like, ‘Well, you’re only a doctor because your parent is a doctor.’ It’s like, ‘No, I went to medical school and trained.’ ” Ever careful, she’s quick to add that she is by no means comparing her own work to that of someone in the medical field. “I just hear it a lot more about women, and I don’t think that it’s a coincidence.”

First off, plenty of nepo babies are men! It’s just that the dude nepo babies tend to not be as “successful” as the women. Secondly, “I can definitely say that nothing is going to get you the part except for being right for the part” is absolute horsesh-t. Nepotism gives a person a leg up at every stage, from education to family connections within the industry, to not having to work bad jobs to make the rent, to getting in the audition and hearing the casting agent say “oh, you’re so-and-so’s daughter?” Thirdly, the whole “you don’t call it nepotism when it’s about doctors” thing is completely asinine!! OMG. There is literally no comparison between doctors and model/actresses, Jesus. “I got a Chanel contract at the age of 16 ON MERIT, just like you got into medical school!” How completely out of touch.

Note: I will cover the models’ reactions to Lily Rose separately tomorrow (I haven’t written it yet).

bitchy | Macy Gray is a transphobe too, commiserates with Piers Morgan

bitchy | What does Prince Harry’s ‘they were happy to lie to protect my brother’ mean?

bitchy | Scobie: The royals are giving Prince Andrew mixed signals about his comeback