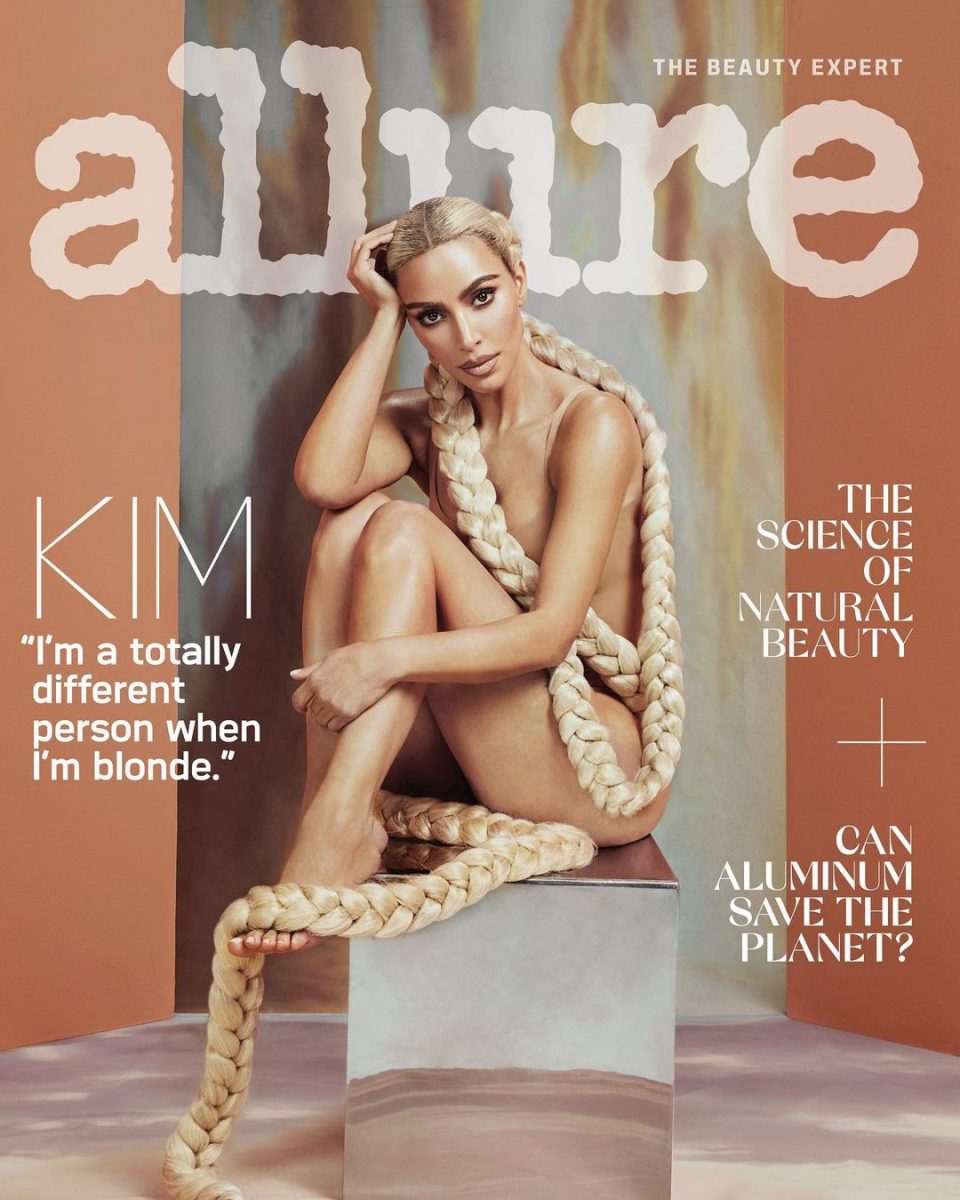 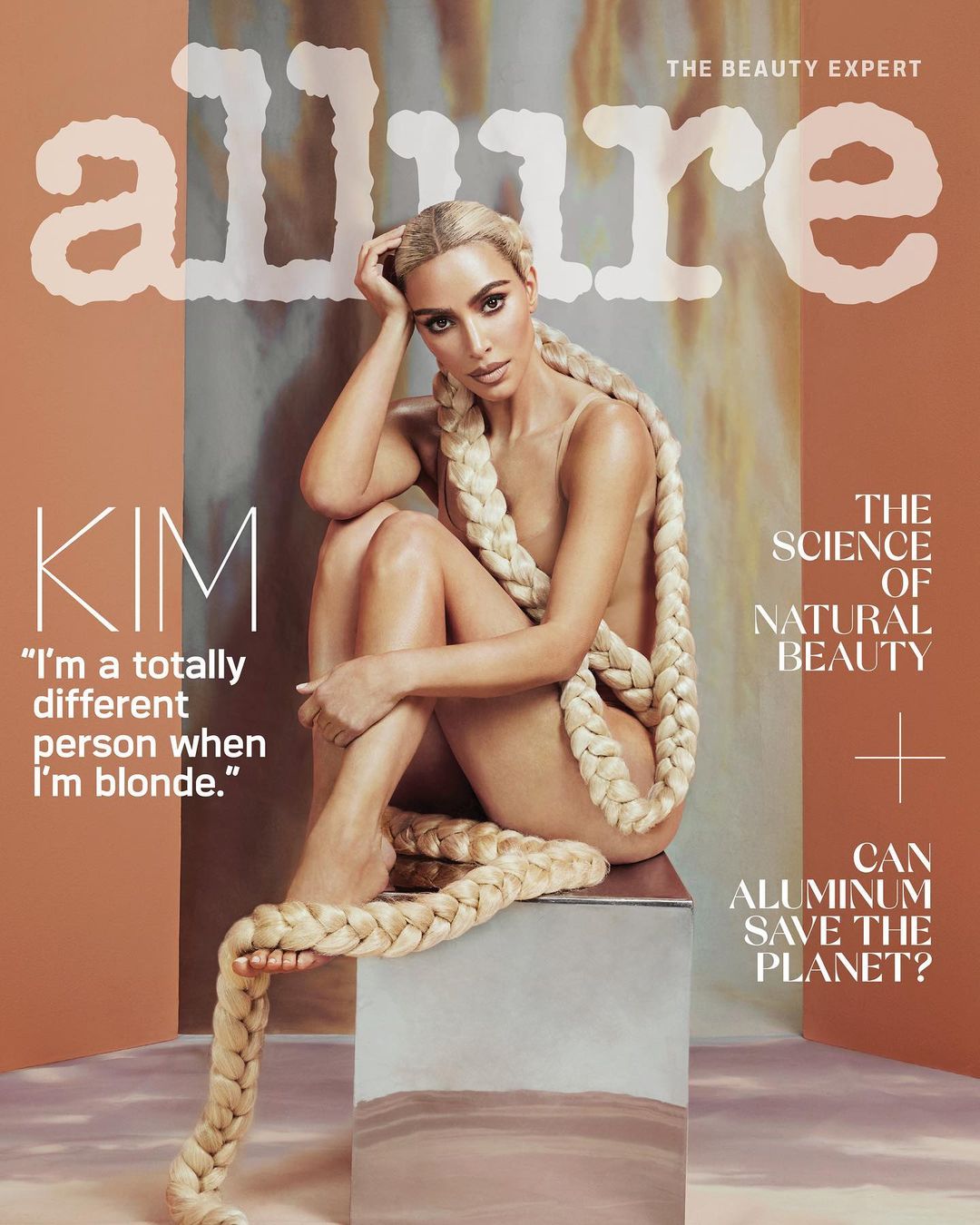 Kim Kardashian is maybe the most superficial person we talk about regularly, and yet I wouldn’t say that Kim is an unserious person, you know? At some point, I just began to take her as she is – she’s vain, she’s superficial, she’s tone-deaf, she’s the personification of excessive consumerism, but she’s also a mom of four and a businesswoman who figured out a way to thrive and succeed at every level. She not only became a massively successful brand, she became one of the most famous women in the world. I guess I sort of hate-respect her, if not flat-out respect her. Kim covers the latest issue of Allure and to say that this is a mind-numbingly vapid profile would be underselling it. That being said, I enjoy when Kim lies about all of the sh-t she does to her face and body. Girl, no one is buying half the sh-t you’re saying.

She loves suggesting what cosmetic work people should do: “People write all the time to say, ‘I heard you’re a really good facial consultant. Can I send a photo? What should I do?’ I am super honest: ‘Okay, you should try this facial or this laser.’ I have notes of the best doctors, the best everything. When this all goes to sh-t, I’m going to start a consultancy firm.”

Her plans to get her law degree: “My dad would’ve been so proud. We would talk about [me being a lawyer one day] and he would say, ‘This is going to age you so much. You’re so vain, you would never want this on your plate.’” Vanity aside, she plans to do reform work, she tells me. “I really was naive to the justice system and once I started to learn, I couldn’t just sit back and let people [be incarcerated].”

She definitely cares about looking good: “I care. I really, genuinely care about looking good. I probably care more than 90 percent of the people on this planet. It’s not easy when you’re a mom and you’re exhausted at the end of the day or you’re in school, and I’m all of the above. I do my beauty treatments usually late at night. After everyone’s in bed, I’m doing laser treatments…

She hates her hands: “I’m at peace with not being perfect and I wasn’t like that before. I hate my hands — they’re wrinkly and gross. But I’ve lived life and I’ve changed so many diapers with these hands and I’ve snuggled my babies with these hands, so I’m okay with them. [Getting older] doesn’t mean that I won’t strive for perfection, but you get to a point where you’re like, ‘Okay, my health is more important than anything else.’”

She wants to look great for her age: “That doesn’t mean that I don’t know the difference from that to an unhealthy level of feeling like I can’t age, I’m 41. I always want to look appropriate. There does come a point when you’ve taken it too far — overfilled, too tight, too much cosmetic work. There’s nothing worse.”

She thinks her look is attainable: “If I’m doing it, it’s attainable. There are so many different beauty standards — whether it’s Gwen Stefani, Jennifer Lopez, Marilyn Monroe. When I was a teenager, [the look] was just blonde waifs.” Then she saw Salma Hayek, who was so beautiful and had darker hair and darker skin and more curves. She looked more like Kardashian. “My mentality was never like, you see them on TV or in magazines and pick who you want to be. It was always: Be yourself, find beauty in everything.”

The underdog: “I think I’ve always just been the underdog. Being on a reality show and that’s not respected. Feeling like I need to work harder to show you guys that I’m not the person you think. I saw some stupid report today where it was like, ‘Kim’s rejected to come to the Jubilee by the Queen.’ I was in London with my boyfriend who’s filming a movie and we’re only here two days. But [the headline] is, ‘Kim: Rejected!’ I think that’s also why I love doing the reality show — the chance to show people who I really am.”

She also talks about her Met Gala diet and how she worked with a nutritionist to lose 20 pounds or whatever and her diet involved real meat which gave her psoriatic arthritis or something. God, I don’t care. I’m so tired of the Met Gala stuff – no one is going to give her a f–king medal for losing weight and ruining Marilyn Monroe’s dress, which didn’t even look good on her! Which she didn’t even pull off! As for all of her lies about what she’s NOT doing to her face these days… I’ll say this, I do think she’s doing less to her face right now. But she used to do a ton. She overdid the Botox and fillers in her late 20s and early 30s. She’s also had multiple surgeries to augment her body and “fix” various things. So spare me the I’m-so-natural stuff.