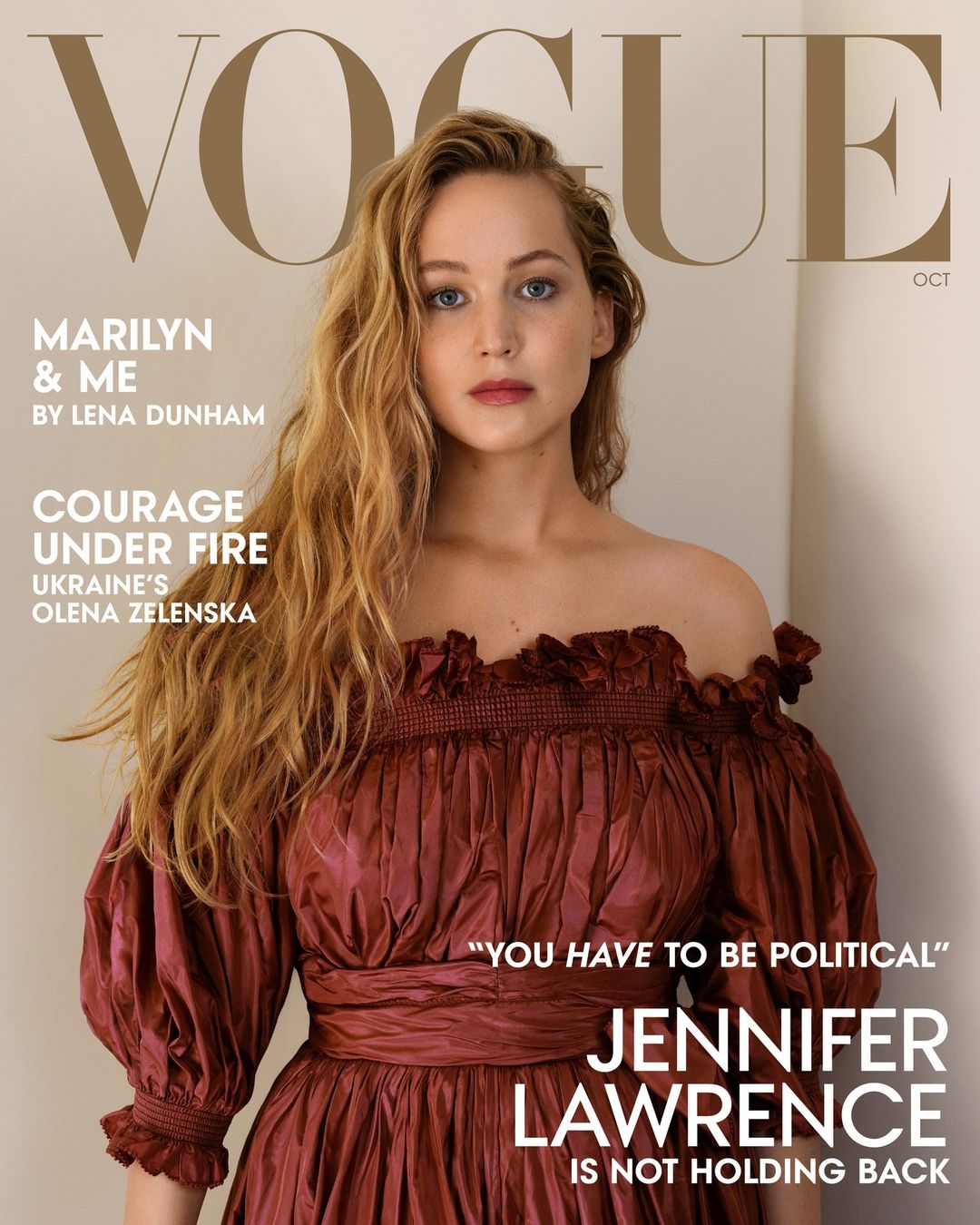 Jennifer Lawrence covers the October issue of Vogue. It’s a classic J.Law interview, in that she talks and talks and talks. She never really had a filter and becoming a mother has only heightened that. She’s currently promoting Causeway, which she stars in and produced. J-Law plays a veteran who returns to NOLA after sustaining a traumatic brain injury in Afghanistan. While she’s definitely promoting the movie and a chunk of the interview is about that, Jennifer also gets in the Dobbs decision, women’s rights, family politics, her son Cy and motherhood in general. Yes, she confirms that she had a son and they named him Cy. Cy Maroney! Some highlights from Vogue:

On art & mothers: “Art more often than not is about one’s mother. I hesitate to say that because I would hate for somebody to go back and watch my movies, or watch this movie in particular, and think that that is the way that I’m painting my mother. My mother is a wonderful person. But that doesn’t mean that there aren’t still things from my childhood that I’m working out.”

Her son: She did share that the baby is a boy, and that his name is Cy, after the postwar American painter Cy Twombly, one of Maroney’s favorite artists.

Motherhood: “It’s so scary to talk about motherhood. Only because it’s so different for everybody. If I say, It was amazing from the start, some people will think, It wasn’t amazing for me at first, and feel bad. Fortunately I have so many girlfriends who were honest. Who were like, It’s scary. You might not connect right away. You might not fall in love right away. So I felt so prepared to be forgiving. I remember walking with one of my best friends at, like, nine months, and being like, Everyone keeps saying that I will love my baby more than my cat. But that’s not true. Maybe I’ll love him as much as my cat?”

Postpartum: “The morning after I gave birth, I felt like my whole life had started over. Like, Now is day one of my life. I just stared. I was just so in love. I also fell in love with all babies everywhere. Newborns are just so amazing. They’re these pink, swollen, fragile little survivors. Now I love all babies.”

Her Republican family: “I just worked so hard in the last five years to forgive my dad and my family and try to understand: It’s different. The information they are getting is different. Their life is different…. I’ve tried to get over it and I really can’t. I can’t. I’m sorry I’m just unleashing, but I can’t f–k with people who aren’t political anymore. You live in the United States of America. You have to be political. It’s too dire. Politics are killing people.”

When Roe was overturned: She had not been entirely in Hillary Clinton’s corner, but still found it incredibly upsetting that the country elected Donald Trump. “It breaks my heart because America had the choice between a woman and a dangerous, dangerous jar of mayonnaise. And they were like, Well, we can’t have a woman. Let’s go with the jar of mayonnaise. I don’t want to disparage my family, but I know that a lot of people are in a similar position with their families. How could you raise a daughter from birth and believe that she doesn’t deserve equality? How?”

Miscarriages: Lawrence herself got pregnant in her early 20s. She one hundred percent intended to get an abortion. But before she could, “I had a miscarriage alone in Montreal.” She got pregnant again a couple years ago, while shooting Don’t Look Up. By then she was married and very much wanted to have a baby. She had another miscarriage. The second time, she had to get a D&C, the surgical procedure by which tissue is removed from the uterus. To imagine children and 18-year-olds in any sort of situation with limited options was simply too much to bear. Even more so now that she does have a baby. “I remember a million times thinking about it while I was pregnant. Thinking about the things that were happening to my body. And I had a great pregnancy. I had a very fortunate pregnancy. But every single second of my life was different. And it would occur to me sometimes: What if I was forced to do this?”

She doesn’t like President Biden or Democrats?? She was demoralized by the anemic response of Democratic leaders and what she felt was Biden’s toothless executive action. (“If anybody ever needed proof that our two-party system is a failure.”)

While I think she’s fighting a good fight on some different fronts, I’m annoyed that this 32-year-old woman still needs to create analogies like “Trump is a jar of mayonnaise” to describe modern American politics. I’m annoyed that in the year of our lord Beyonce 2022, she can’t conjure up a full-throated defense of both Hillary Clinton and Joe Biden, given everything else she’s saying. Her need to semantically “both sides” modern politics ends up soft-pedaling the very real threat that Republicans face to the entire country. Sure, the mayonnaise tried to install himself as dictator via a violent coup and the mayonnaise is a rapist white supremacist, but Joe Biden didn’t wave a magic wand and fix everything! Grow up.