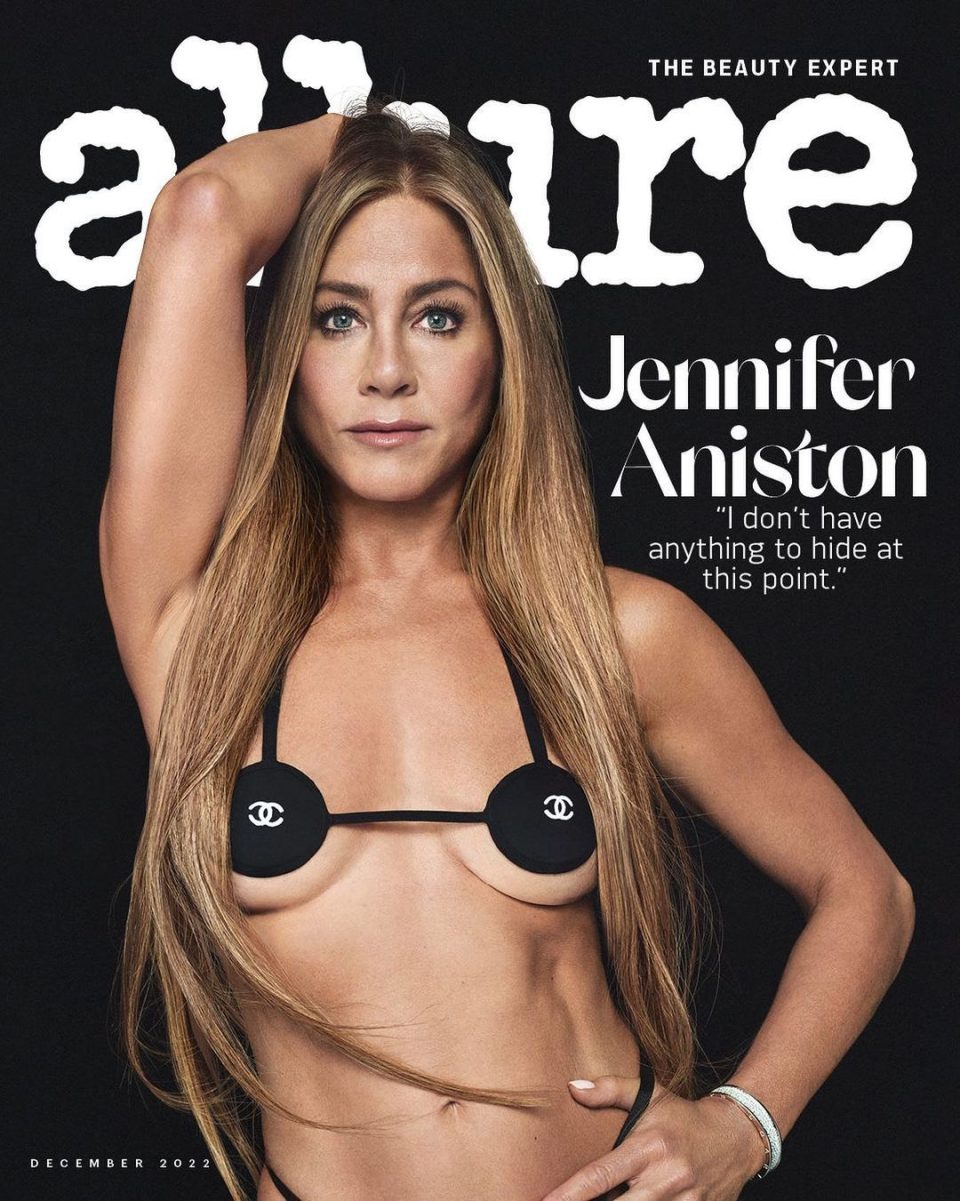 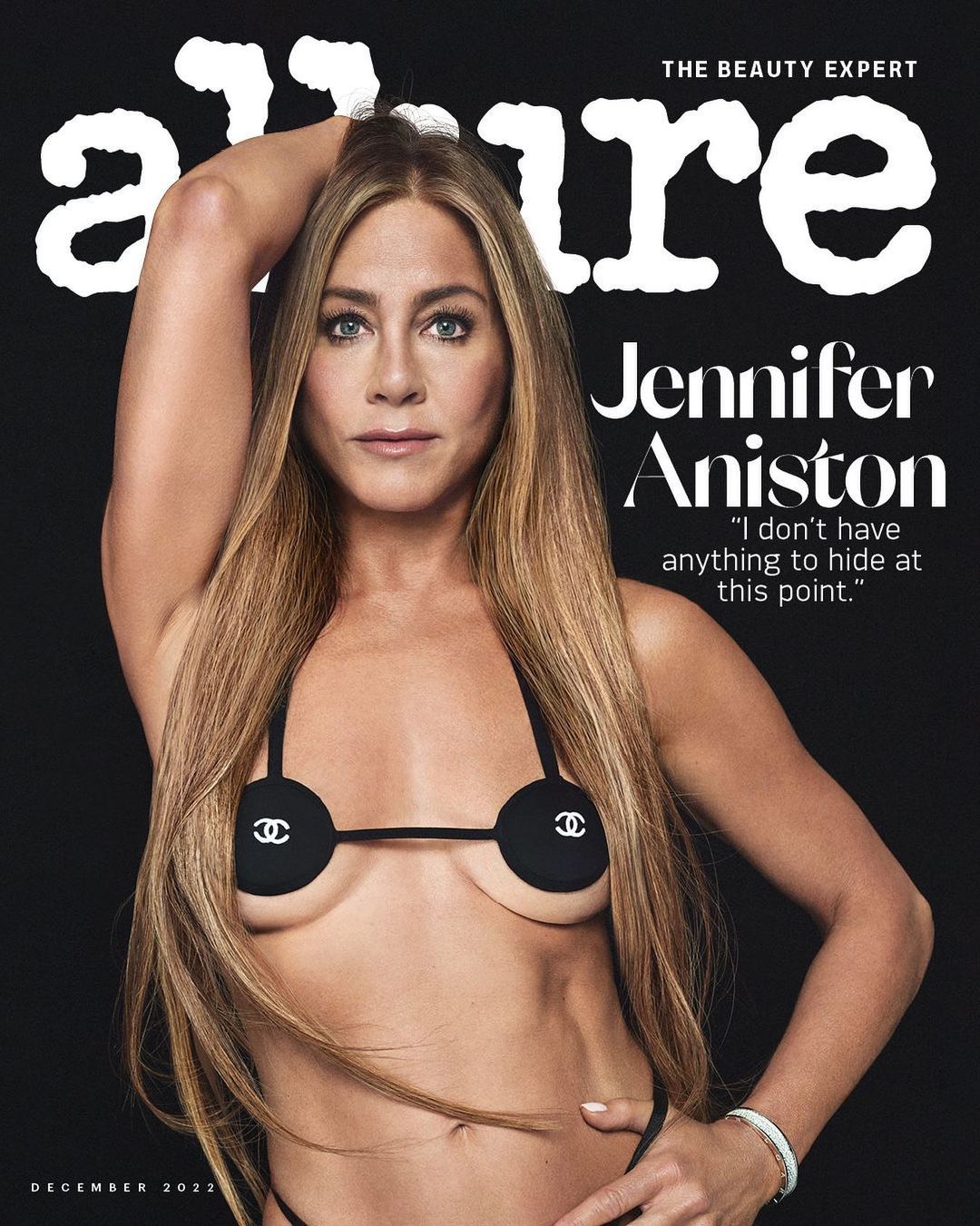 Last year, Jennifer Aniston launched a haircare brand called Lolavie. That seems to be why she’s on the December cover of Allure, to promote Lolavie, although The Morning Show also gets a few mentions in this Allure piece. Aniston has definitely taken several steps back from being a “America’s TV sweetheart/wronged woman/tabloid queen,” which was largely her persona for two decades. When Aniston and Justin Theroux broke up (and remember, they were never married), she just stopped participating in tabloid culture in the same way. In recent years, she’ll maybe give one interview every eight months and she always makes news for those pieces, then she disappears again and we can go months without hearing anything about her. Anyway, Aniston has a lot to say in this piece, a lot about how she tried to have a baby, about social media and tabloid culture and about tons of other stuff. Some highlights:

When someone comparing her to a silent film star: “I’m a little choked up. I feel like it’s dying. There are no more movie stars. There’s no more glamour. Even the Oscar parties used to be so fun….”

She hates social media: “I hate social media. I’m not good at it. It’s torture for me. The reason I went on Instagram was to launch this line [Lolavie]. Then the pandemic hit and we didn’t launch. So I was just stuck with being on Instagram. It doesn’t come naturally.”

Growing up without social media: “I’m really happy that we got to experience growing up, being a teenager, being in our 20s without this social media aspect. Look, the internet, great intentions, right? Connect people socially, social networking. It goes back to how young girls feel about themselves, compare and despair.”

The most difficult time: “I was trying to get pregnant. It was a challenging road for me, the baby-making road,” says Aniston, of a period several years ago. “All the years and years and years of speculation… It was really hard. I was going through IVF, drinking Chinese teas, you name it. I was throwing everything at it. I would’ve given anything if someone had said to me, ‘Freeze your eggs. Do yourself a favor.’ You just don’t think it. So here I am today. The ship has sailed. I have zero regrets. I actually feel a little relief now because there is no more, ‘Can I? Maybe. Maybe. Maybe.’ I don’t have to think about that anymore.”

The narratives around her: Adding to the personal pain of what she went through was the “narrative that I was just selfish,” she says. “I just cared about my career. And God forbid a woman is successful and doesn’t have a child. And the reason my husband left me, why we broke up and ended our marriage, was because I wouldn’t give him a kid. It was absolute lies. I don’t have anything to hide at this point.”

Whether she would ever get married again: “Never say never, but I don’t have any interest. I’d love a relationship. Who knows? There are moments I want to just crawl up in a ball and say, ‘I need support.’ It would be wonderful to come home and fall into somebody’s arms and say, ‘That was a tough day.’”

Enlightenment: “I feel like I’m coming through a period that was challenging and coming back into the light. I have had to do personal work that was long overdue, parts of me that hadn’t healed from the time I was a little kid. I’m a very independent person. Intimacy has always been a little here,” she extends her hand an arm’s length in front of her. “I’ve realized you will always be working on stuff. I am a constant work in progress. Thank God. How uninteresting would life be if we all achieved enlightenment and that was it? I didn’t want to partner with someone until some of that work was done. It wouldn’t be fair. I don’t want to move into a house when there are no walls.”

Her IVF story: “I’ve spent so many years protecting my story about IVF. I’m so protective of these parts because I feel like there’s so little that I get to keep to myself. The [world] creates narratives that aren’t true, so I might as well tell the truth. I feel like I’m coming out of hibernation. I don’t have anything to hide.”

Her IVF comments are new – while she’s obliquely referenced her fertility struggles in the past, she’s never come out and said all of this before. I feel really sorry for her, and I appreciate her message to younger women to freeze their eggs. Mindy Kaling says that a lot too, that if you have the resources when you’re younger, you should freeze your eggs.

She’s right about social media and growing up without social media. My teenage years were downright blissful compared to what the youths go through these days. She’s also sort of right about the lack of “glamour” nowadays because of social media and internet culture. Although I would argue that there are still movie stars, there just isn’t the “movie star culture” like there was circa 1990-2008.