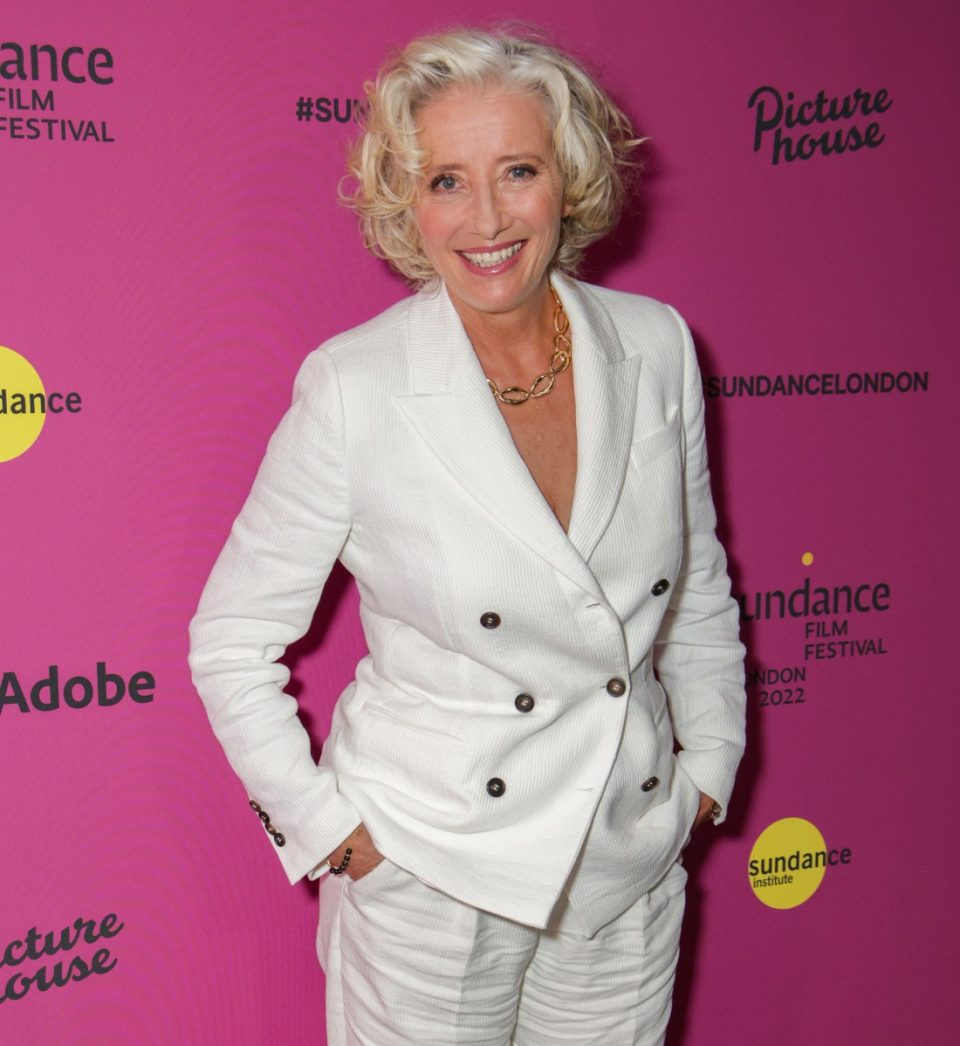 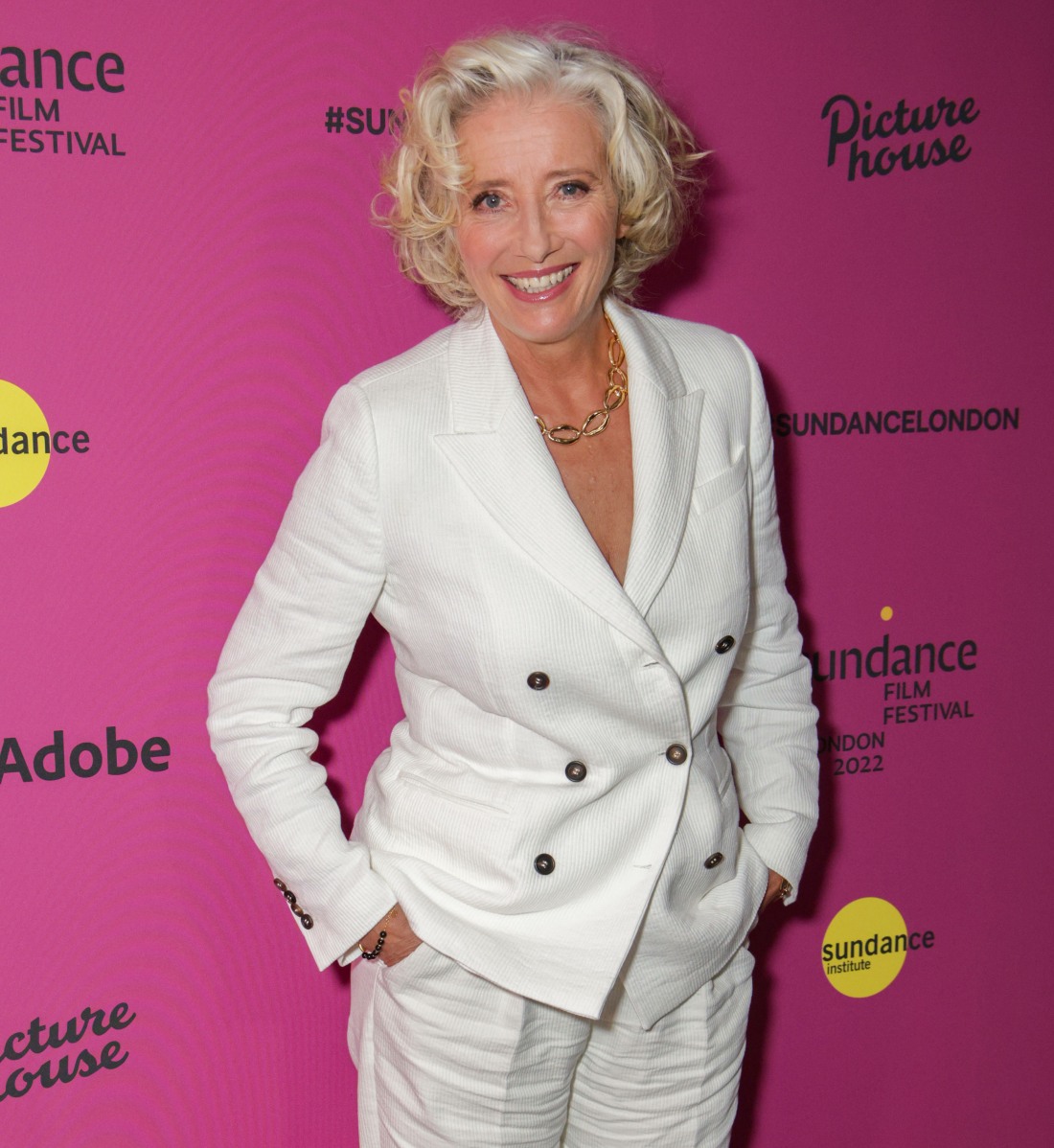 Good Luck to You, Leo Grande was released on Hulu here in the US. It’s a small, indie drama starring Emma Thompson as a retired teacher who wants some adventure, so she hires a sex worker so she can have some experiences she’s never had. There was apparently some back-and-forth about whether a film released on Hulu would be eligible for Academy consideration. The ruling came down recently that Leo Grande qualifies, so now Emma is part of an Oscar campaign for her performance. She spoke to Vanity Fair’s Little Gold Men podcast about the film, the industry, streaming and a lot more. Some highlights:

Watching herself perform on screen, naked: “I would say that the most vulnerable I felt was in Berlin at the film festival in this massive cinema. It was a bloody football field—I mean, huge wraparound room, where we were pretty large on screen. When they told me that it was going to stream [on Hulu], I thought—in a way, in America, there’s more puritanism about sex and sexual pleasure even than there is here. And there’s a lot here. I thought maybe it’s easier for people to see it in their homes.

What she thinks about indie movies going on streaming: “It reminds me of a little bit of all the debate that came around when video started. I’m old enough to remember that, you see. Everyone said, “It’s going to kill cinema.” Didn’t kill cinema. “Cinema’s going to kill theater.” Didn’t kill theater. “COVID’s going to kill theater.” Everyone’s gone back to the theater. We all get into a bit of a panic. And I’m old enough to remember all of those panics and to know that actually in the end, really great stories do find their way out a lot of the time. I’m not underplaying the fact that I’ll find something and suddenly go, “God, why didn’t I see this at the time?” Everything’s under the huge tsunami of massive movies. If at the Cannes Film Festival you’ve got literally got fighter jets going over for Top Gun: Maverick, I go, look, if we’re not going to be supported by independent movie film festivals, then that’s something that’s got to be taken responsibility for.

The film made her recognize “the waste of time” of not accepting one’s body. “You can’t unlearn it because it’s brainwashing. I’ve been brainwashed since I was very young and the brainwashing continues. I think it’s worse actually now because it’s continued on social media. So instead of people saying, “We are now going to inhabit the world in our real selves, in our real forms,” people are taking their forms and photoshopping them themselves. Everything that I was brought up with, which only happened in magazines, is now happening to people on people’s phones. This notion of the ideal and the perfect, industrialized, banal and tedious though it is, has been made even more of a thing. And thus we’re looking at kids as young as eight saying, “I don’t like my thighs. I don’t like this.” Anorexia’s hugely on the rise. It’s something that I’ve fought against all my life, but I can’t fill in those runnels. I just can’t do it. But I can try to be the change. At least I can be honest. And at least I can say, “Look, I accept this now.” I accept my body. I don’t have to love it, but I accept it.

On Maggie Gyllenhaal & seeing an early cut of ‘The Lost Daughter’: “Her presentation of the hell and the torment of motherhood, if it’s not what actually you want to do, was brilliant…[Maggie & I] been mates for a long time and have talked about all of this for a very long time. And actually, one of the things that should be, and I think is becoming part of a mainstream conversation, is that you don’t have to have babies to be a complete woman. You just don’t have to do it. And I think there’s still a huge taboo about that—huge. You become a mother and you realize that everything’s your fault because everything’s the mother’s fault, everything. In popular psychology, that’s changing a bit, but certainly when psychology began, that was everything. It was all written by men, and it was all very bad science. All of this stuff has to be unpacked, taken apart and redefined, re-explored. And all of these movies that we’re talking about are doing that.

Stories we need to stop telling: “There are certain stories we really do have to stop telling because I think they’re quite damaging. One is, “And they lived happily ever after.” That’s just bullsh-t….The other story that we really need to stop telling is about one man saving the world. This is just a very, very dull story, and it has to stop. I’m so bored. When I talk to my brilliant producer friend, Lindsay Doran, she does a talk about the female hero and what writers are told. They’re told the most extraordinary things now—today they’re told, “Well, she can’t cry. She can’t cry because that’s showing feminine weakness. She’s got to be badass.” All the female tropes now have to be like the men. You go, “Hang on a second.” It’s the same story. We have to go into the in-between bit and say, “But what is this that we’re representing?” We are just saying the same thing again and again.

“You don’t have to have babies to be a complete woman. You just don’t have to do it. And I think there’s still a huge taboo about that—huge…” She’s right. Childfree women are still considered oddities, or the exception to the rule. Mothers reinforce it too, when they talk about how having a baby makes them feel “complete” or “whole.” This made me stop and think too: “in America, there’s more puritanism about sex and sexual pleasure even than there is here. And there’s a lot here.” I assume she means the UK and perhaps the British-American strains of Puritanism. I get that. But British tabloids still put topless photos in every issue, right? 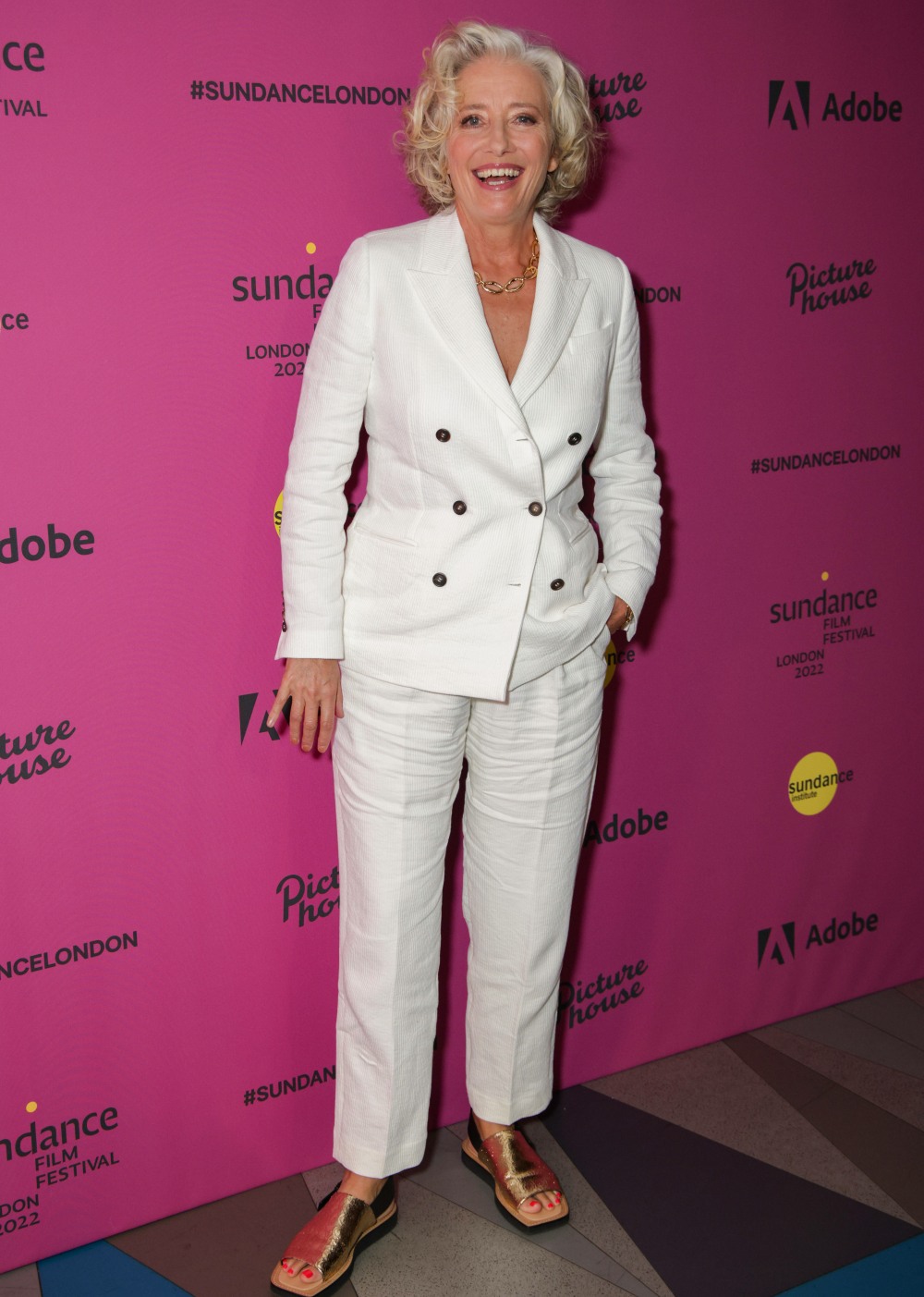 Emma Thompson arrives for the premiere of Good Luck to You, Leo Grande’ at the opening of the Sundance Film Festival London on June 9, 2022,Image: 698429587, License: Rights-managed, Restrictions: , Model Release: no, Credit line: James Shaw / Avalon

Emma Thompson arrives for the premiere of Good Luck to You, Leo Grande’ at the opening of the Sundance Film Festival London on June 9, 2022,Image: 698429694, License: Rights-managed, Restrictions: , Model Release: no, Credit line: James Shaw / Avalon

Emma Thompson arrives for the premiere of Good Luck to You, Leo Grande’ at the opening of the Sundance Film Festival London on June 9, 2022,Image: 698429733, License: Rights-managed, Restrictions: , Model Release: no, Credit line: James Shaw / Avalon