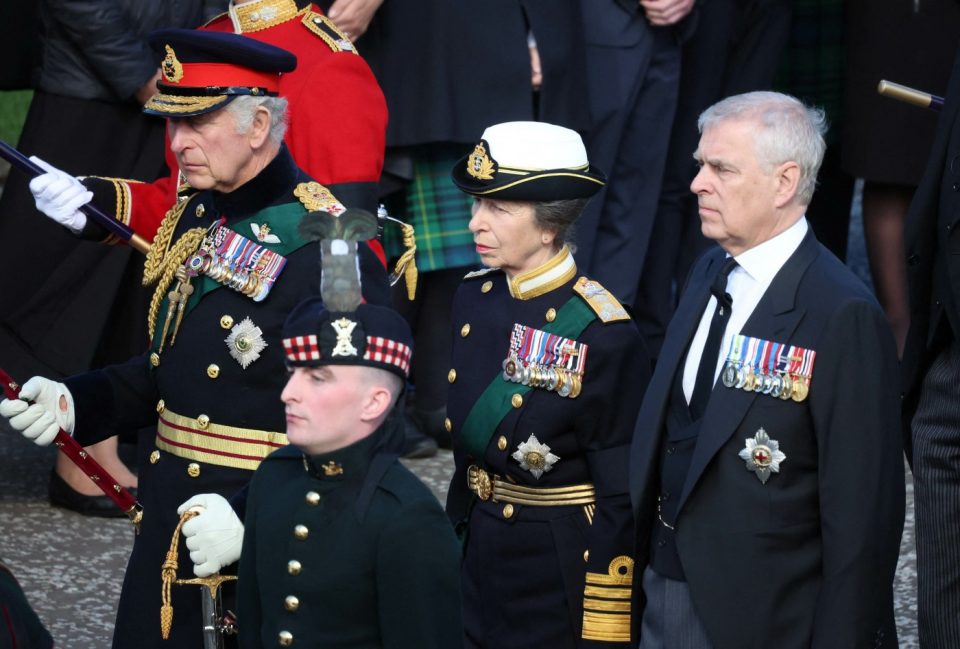 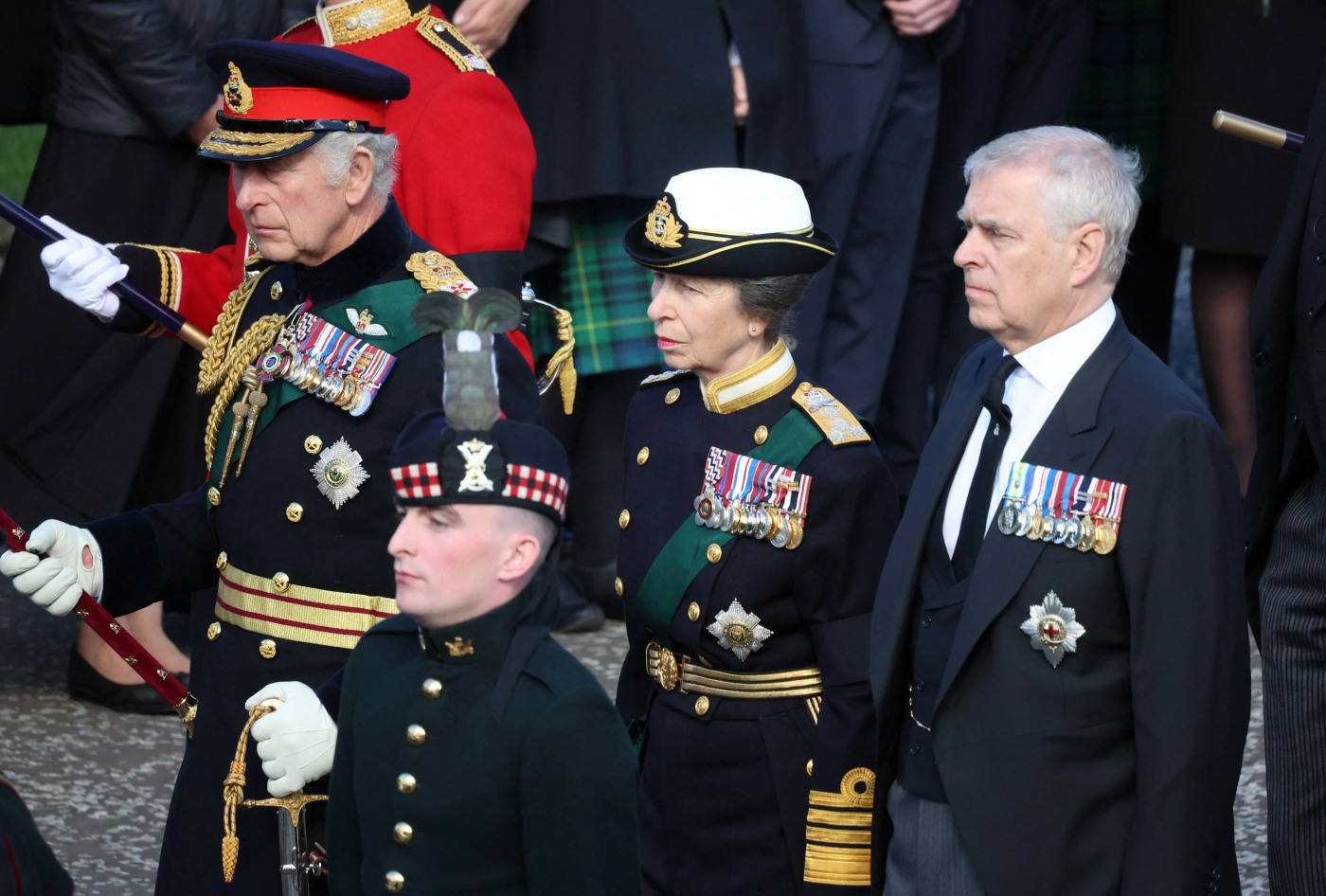 Has anyone else had the Scottish-accented “Andrew, you’re a sick old man” as an earworm this week? That happened on Monday, during the outdoor procession for Queen Elizabeth II’s coffin, with QEII’s four children walking behind the coffin. A young man named Rory heckled Prince Andrew and Rory was arrested for disturbing the peace. Andrew has never been arrested for raping teenagers trafficked to him by a convicted pedophile and a convicted human trafficker. Anyway, Rory’s arrest made national and international headlines. Rory not only spoke the truth, his heckling and arrest reminded everyone that Andrew is front and center during this very public memorial and funeral. Now sources tell the Daily Beast that make no mistake, after QEII’s funeral is over, Andrew will disappear into the ether.

Ethered: One royal source told The Daily Beast that Andrew’s presence at events this week should not be interpreted as King Charles endorsing his return to public life and that he would largely “disappear” from view after the funeral rites for the queen are complete.

Andrew was still trying to rehabilitate his image this week before he was heckled: The omens for the rehabilitation of Andrew had, until that moment, been looking good. His brother King Charles, whose contempt for Andrew and his lifestyle goes back decades, had been surprisingly indulgent; firstly, he had allowed Andrew to travel up to Scotland in an official RAF jet with his heir, Prince William and Prince Edward and his wife, Sophie. There was little doubt that Andrew, never one to waste a good crisis, appeared to be seeking using the death of his mother to apply a coat of whitewash to his image, whether that be affectionately comforting his daughter under the glare of the cameras at Balmoral or adopting the queen’s corgis.

The corgis: Make no this mistake, this was not a quiet gesture to help out the family. Andrew’s team have shouted it from the rooftops, with friends briefing journalists, including the Daily Beast: “The corgis will return to live at Royal Lodge with the Duke and the Duchess (Andrew and Sarah). It was the Duchess who found the puppies which were gifted to Her Majesty by the Duke. The Duchess bonded with HM over dog walking and riding horses and even after her divorce, she would continue her great friendship with HM, by walking the dogs and chatting.” By taking the dogs, Andrew may be hoping he can convince one or two percent of the population to “move on” from the sex abuse and rape allegations he paid millions of dollars to settle earlier this year, without admitting liability.

Everyone was surprised that Andrew will be included on everything: To everyone’s great surprise it was announced on Monday that Prince Andrew would play a central role in all the major events of the next week: he would be in attendance at no fewer than five key ceremonial events including today’s procession and service of thanksgiving, a Procession to Westminster Hall on Wednesday followed by a service of prayer and reflection; the “Vigil of the Princes” at Westminster Hall, the State Funeral in London and subsequent Committal Service at St George’s Chapel Windsor.

Andrew’s military uniform: Most astonishing of all, however, was a briefing given to journalists Monday at which it was revealed that Andrew would be permitted to wear his coveted military uniform for the “Vigil of the Princes—while Prince Harry would not.

King Charles is bad at making decisions: There are some who would say that parading Andrew down the streets of Scotland was perhaps not the smartest opening move in governing the Scots by King Charles. The country has a strong nationalist movement, and while millions of citizens respect the queen, only 45% support the monarchy compared to 62% across the whole of the UK (including Scotland). Andrew is a walking (if not talking) piece of reputational damage—which Rory will have reminded the royals all too loudly about.

Palace staff want to see Andrew ethered: “The way that kid reacted should remind the royals that the public would be quite happy to never see Prince Andrew again,” one former royal household member told The Daily Beast. “He is an unpleasant, arrogant man with no support in the institution. Including him in the events of this week is a mistake. This is not a family funeral. It is a state affair. She may be his mother—but she’s everyone’s queen.”

Well… I don’t know what to say here, honestly. I think Charles was probably thinking that this would be Andrew’s last hurrah, his last moment of pseudo-public life. I assume that, behind-the-scenes, Charles and Andrew are already negotiating Andrew’s price for disappearing forever, so this was all part of the exit package, at least that’s how it seems to me. Now, does that mean that King Charles has also massively miscalculated? Yes. Andrew has too – Andrew seems to still believe that he can somehow rehab his image and it’s not happening. He can’t just skulk around one of the largest royal funerals ever and no one is going to say sh-t. Of course people are going to say sh-t. And of course Charles completely bungled it too, by assuring Andrew that he would get to play dress up one time in his military dress uniform but Prince Harry wouldn’t.

Somebody yells out, “Andrew, you’re a sick old man” to Prince Andrew, who is walking behind Queen Elizabeth’s coffin pic.twitter.com/M6DsyuPLXR 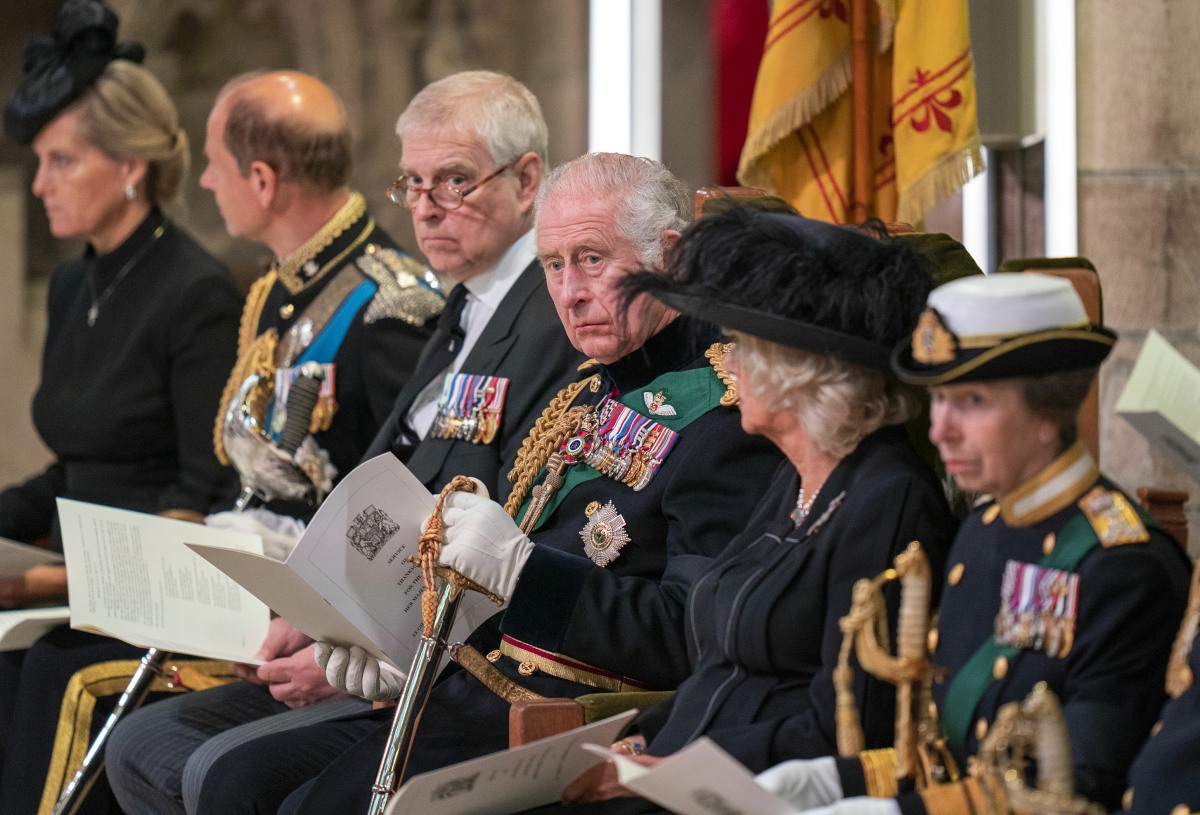 bitchy | No, the Duchess of Sussex wasn’t wearing a ‘mic pack’ in Windsor