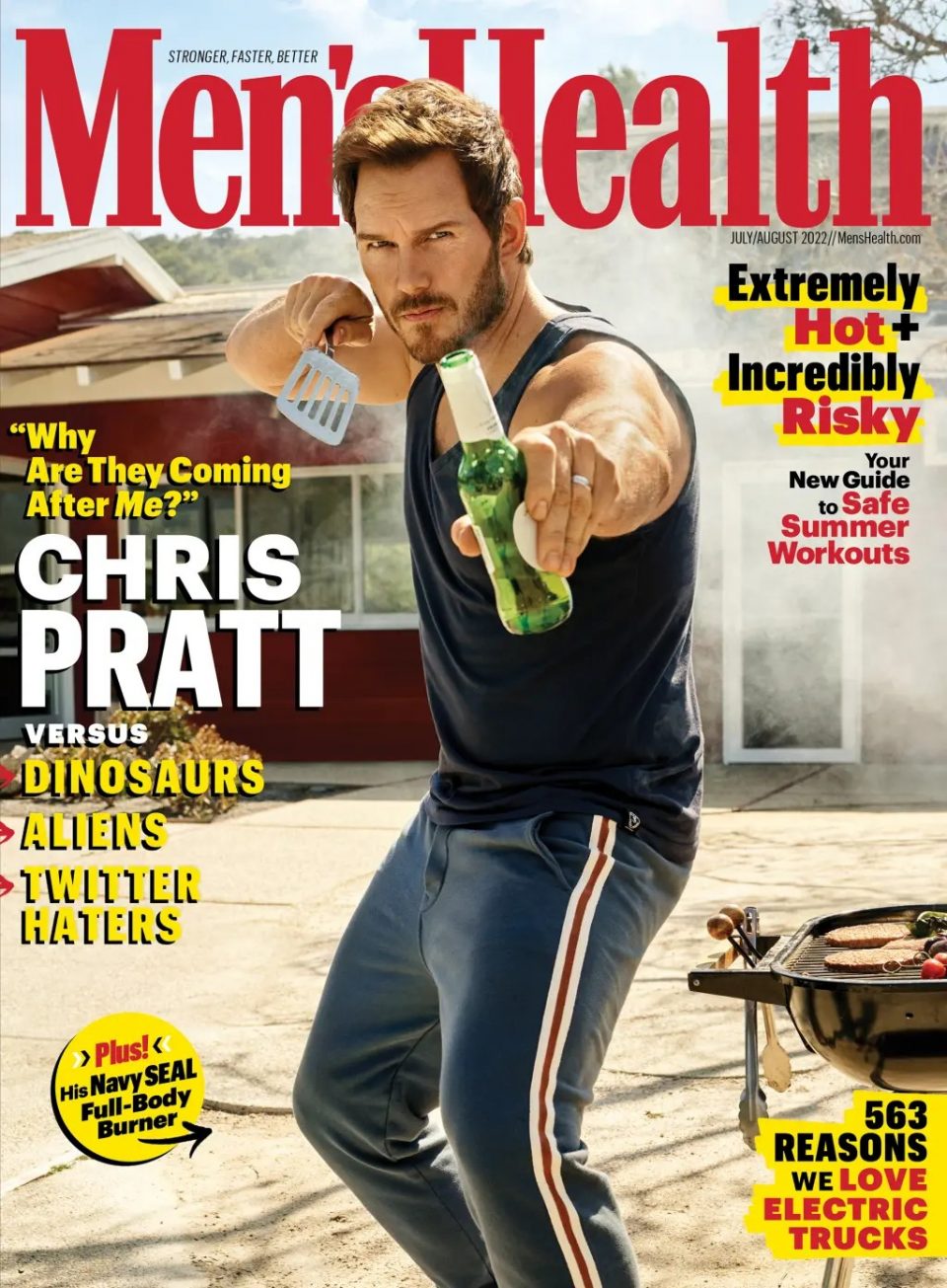 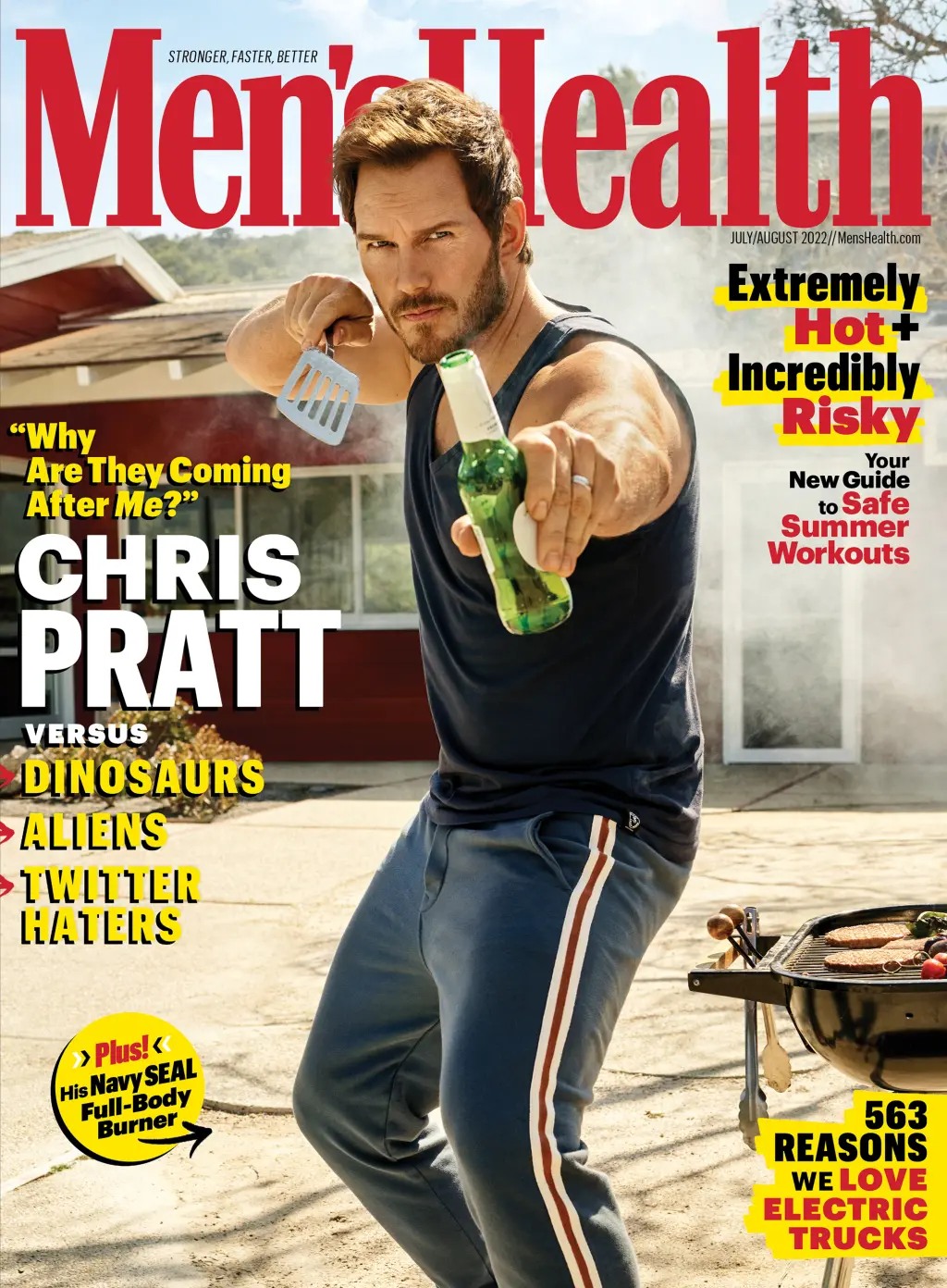 Since everyone loves to hate on Chris Pratt, I’ll start out with some positive stuff about him. His coworkers like him. He’s reportedly really professional and friendly. He manages to do his work without forcing everyone to talk about how he’s some grand artiste. He seems like a loving, hands-on father. All of that is fine and admirable. But Pratt is also criticized a lot, and sometimes it’s pretty justified. Like when he praised his wife Katherine for “giving me a healthy daughter”… when his son Jack, with Anna Faris, was born premie with lots of health complications. Like when he seems to be leaving a trail of MAGA breadcrumbs for people to find. Like when everyone around Pratt acts like people making fun of a rich white dude is some kind of huge cultural catastrophe. I bring all of this up because Pratt covers the latest issue of Men’s Health, and much of the piece is Chris trying to explain why people have the wrong idea about him. Some highlights:

He doesn’t understand why the internet comes after him: “You don’t ever wanna get caught complaining or anything. ’Cause I have so many blessings. I consider everything a blessing truly in my life.” But during a recent run, he tells me, he couldn’t shake this feeling: “Why are they coming after me?”

He thinks he’s criticized because he prosthelytizes in public: “Maybe it was hubris. For me to stand up on the stage and say the things that I said, I’m not sure I touched anybody… Religion has been oppressive as f–k for a long time. I didn’t know that I would kind of become the face of religion when really I’m not a religious person. I think there’s a distinction between being religious—adhering to the customs created by man, oftentimes appropriating the awe reserved for who I believe is a very real God—and using it to control people, to take money from people, to abuse children, to steal land, to justify hatred. Whatever it is. The evil that’s in the heart of every single man has glommed on to the back of religion and come along for the ride.”

He never went to Hillsong: “I never went to Hillsong. I’ve never actually been to Hillsong. I don’t know anyone from that church.” Okay. Why not say that at the time? “I’m gonna, like, throw a church under the bus?” he replies, before reconsidering. “If it’s like the Westboro Baptist Church, that’s different.” No one’s suggesting that. But he could have, ya know, read up on Hillsong. Pratt tells me he attends Zoe Church, but I’m not sure the distinction will satisfy his critics. Zoe, also popular with celebrities like Justin and Hailey Bieber, was founded by pastor Chad Veach. He executive- produced a 2017 film that equated “sexual brokenness” with “same-sex attraction.” Pratt also mentions that he doesn’t go to Zoe exclusively. When it came time for Lyla to be baptized, he and his wife chose a norm-y Catholic church in Santa Monica where she worshipped as a kid.

The incident where he thanked Katherine for giving him a ‘healthy daughter’: “I said something like, ‘Find someone who looks at you the way my wife looks at me.’ And then I gave her some sh-t in the thing and said, ‘But I love you. I’m so thankful for my wife—she gave me a beautiful, healthy daughter.’ And then a bunch of articles came out and said, ‘That’s so cringeworthy. I can’t believe Chris Pratt would thank her for a healthy daughter when his first child was born premature. That’s such a dig at his ex-wife.’ And I’m like, That is f–ked up. My son’s gonna read that one day. He’s nine. And it’s etched in digital stone. It really f–king bothered me, dude. I cried about it. I was like, I hate that these blessings in my life are—to the people close to me—a real burden.”

His dad was an a–hole: “I am a sensitive person. My dad knew that when I was a youngster, and it kind of made him dislike me. Or not dislike me but act like he disliked me—’cause he probably grew up in a world where a guy like that could get eaten alive. And so he wanted to put calluses on me. Early on, I developed humor as a self-defense mechanism—I developed Andy, really. Andy on Parks and Rec was my clown that I had honed my entire life, a guy who is affable, who’s an intelligent person playing a dumb person.”

Re: the “healthy daughter” conversation was not “Chris Pratt is cringeworthy.” The conversation was about how everyone felt bad for Anna Faris, and that Pratt was an a–hole for making it sound like Lyla was his “healthy child” and Jack wasn’t (he didn’t even mention Jack in the post). Pratt is trying to say that it’s our fault for interpreting his words that way, and how dare the internet people print his words or talk about what Pratt actually wrote. Maybe Pratt never meant “healthy daughter” as a comparison to Jack, but it’s not our fault that Pratt came across as really callous to his ex-wife and his son.

bitchy | Chris Pratt doesn’t want to be called Chris: ‘That’s not my name’