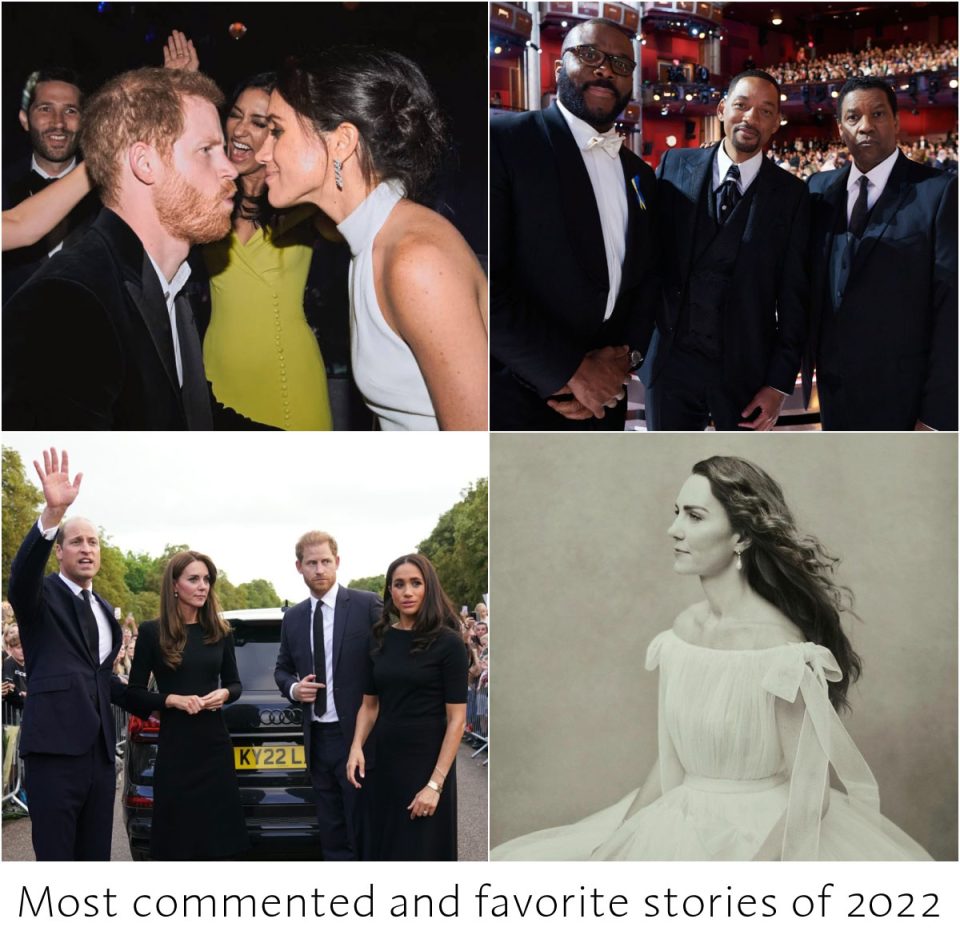 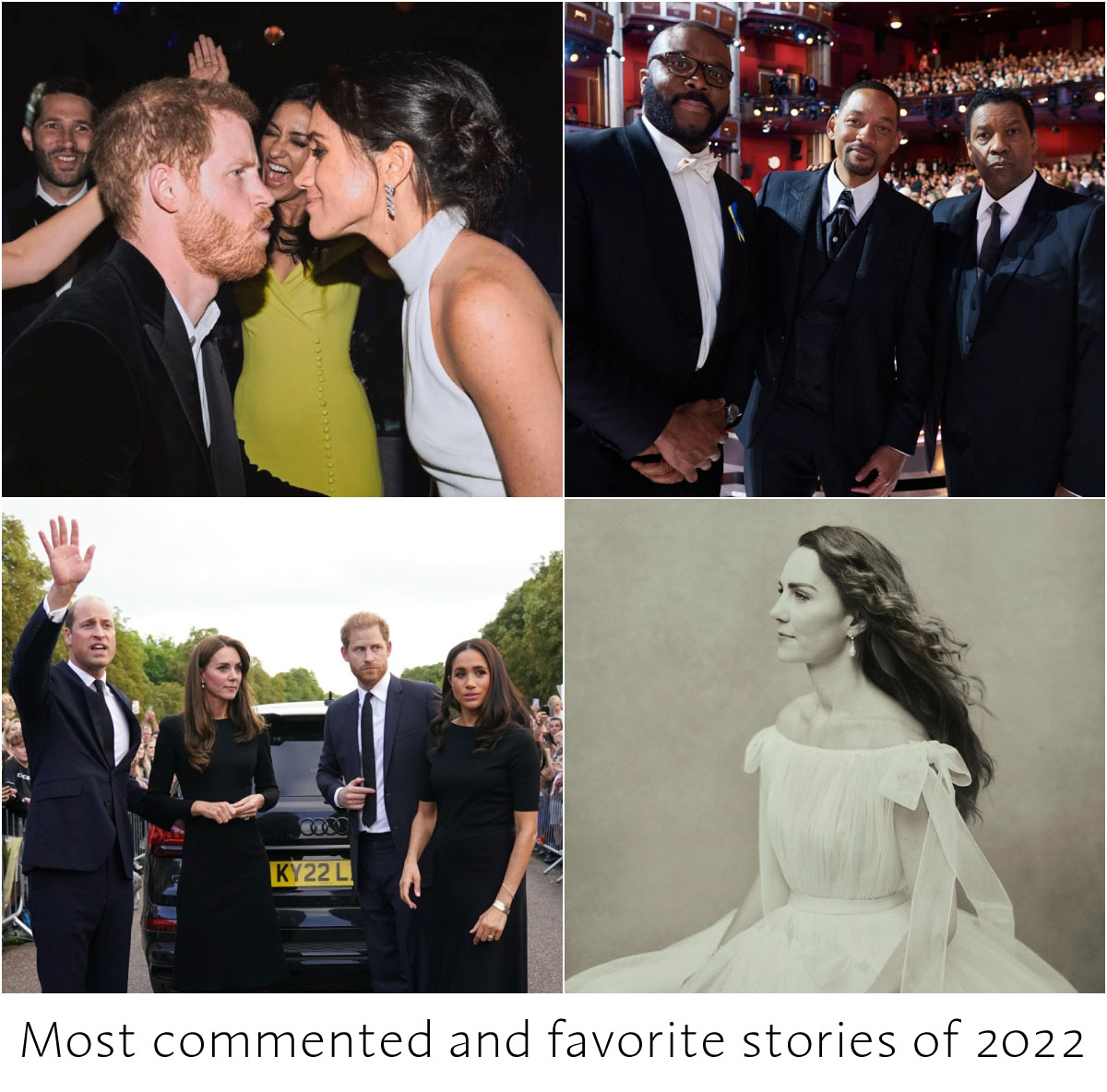 Last year our most commented story was about the Sussexes’ Oprah interview, which came out on March 21, 2021, right around the time we were finally getting vaccinated. In the post with our most commented, we added our favorite stories of the year, which were about the vaccines coming out, celebrities admitting that they don’t bathe and the hype over the Keenwell Institute. This year we had the Invictus Games, the Jubbly, the Queen’s funeral and of course Harry and Meghan’s Netflix series! Our most commented stories were about the royals, with one major exception, which you’ll see below.

The Cambridges did a curious amount of moving house this year, prompting rumors that they were separated. Their separate arrival at events lent credence to that, although the British press didn’t say much about it. They continued to do their meager jobs by showing up to events in dated looks and stolen jewels, although they tried to look more modern when hobnobbing with celebrities. The Cambridges underlined how much they embraced antiquated tradition when Kate released her eerie 40th birthday portraits early this year.

Charles became king when his mother died and promptly ignored her wishes to promote the Wessexes but promoted the Cambridges to the Waleses almost immediately. He followed his mother’s instructions to make Camilla Queen consort though. The line of succession was updated after the Queen passed and Prince Harry and Meghan’s children were listed without titles. What’s more is that Charles made sure Meghan wasn’t invited to Balmoral when everyone was saying goodbye to the Queen. He also uninvited the Sussexes from a reception at Buckingham Palace for visiting dignitaries paying their respects.

15, 12, 9, 8, 6 Queen Elizabeth celebrated her platinum jubilee in June and then passed away in September

This June, Queen Elizabeth celebrated 70 years on the throne with her Platinum Jubilee. Our most commented stories about the Jubilee were whether the Sussexes would bring their children (they did but we didn’t get to see them) and how great they looked, although they kept a low profile. The Queen passed away at the age of 96 on September 8th. Her very long state funeral was on the 19th. Before that the Sussexes and the then-Cambridges greeted the crowd together outside Windsor Castle. They barely interacted with each other and looked quite uncomfortable.

7 Meghan went to Uvalde after the shooting, brought food for volunteers
Embed from Getty Images
Duchess Meghan visited Uvalde, Texas in late May after 19 children and two teachers were murdered at an elementary school following a failure by police to intervene. She laid flowers at the memorial and brought food for volunteers there, a thoughtful gesture that was much appreciated. Harry and Meghan continue to focus on charities and causes important to them, and encourage others to make a difference too.

4 Harry and Meghan came out on Netflix

We got an early Christmas present with the Harry and Meghan series on Netflix, which I thought was exceptional. It laid out the Sussexes’ situation so well without dishing much dirt. As Kaiser and I have discussed on the podcast, Meghan and Harry are classier than we would ever be. (You can see the top 8 stories about part one and part two of their series by signing up for our mailing list. If you’re already signed up it knows and will still send you the email with the stories.) The most commented story from their series was when Meghan described meeting Will and Kate and not realizing that she wasn’t supposed to hug them. A source close to Kate countered that Kate is a big hugger, which doesn’t seem likely given everything we’ve seen from her to date.

Right after attending a palace reception held by his smoking buddy Camilla and attended by fellow Meghan-hater Piers Morgan, Jeremy Clarkson published a screed in the Sun saying he hated Meghan and wanted to see her stripped naked and hit with excrement in the streets. The article was removed days later and Clarkson issued a non-apology saying we didn’t get his Game of Thrones reference. The Sun apologized and cited their charity work. Meghan and Harry issued a statement about it, mentioning the Sun’s history of violent rhetoric. The palace’s silence spoke volumes. We closed the comments on this post or it may have been the most commented.

1 Will Smith slapped Chris Rock at the Oscars
Embed from Getty Images
It was the slap heard round the world and met with performative outrage from white people. Will Smith went up on stage at the Oscars and smacked Chris Rock for making a rude joke about Will’s wife, Jada, being bald. Will was not arrested that night and many of Hollywood’s elite rallied around him, however his career definitely took a hit and some of his projects were canceled. Will was kicked out of the Academy for ten years and many of us marveled at how quickly the Academy acted considering that it didn’t expel Roman Polanski until 2018. It came out that Will had asked Chris Rock years earlier to keep Jada’s name out of his mouth.

Our favorites: Charles got covid, Camilla went to a cooking event maskless the next day, predictably had covid

I’ll never forget the fact that, the day after it was publicly announced that Charles had covid (after attending an event maskless the night before), Camilla went to a cooking event and refused to wear a mask! She was breathing on people and food and then announced a few later that she had covid. These people have shown us, over and over again, who they are.

Our favorites: Ben Affleck and Jennifer Lopez got married

19 years after their first failed wedding attempt, Ben Affleck and Jennifer Lopez got married in Las Vegas! They were of course photographed on their honeymoons in Paris and Milan, just like during their paparazzi-friendly courtship. Bennifer forever!

Our favorites: Leonardo DiCaprio dumped his girlfriend when she turned 25

Leonardo DiCaprio, 48, predictably dumped his girlfriend, Camilla Marrone, when she turned 25. He seemed to be embarrassed by the fallout and announced that he was dating comparatively ancient Gigi Hadid, a 27-year-old single mother of one. That relationship did not last long and he was soon back to dating models under 25.

Our favorites: The optics of the Keen Caribbean tour

Incredibly, the then-Cambridges’s tour of the Caribbean was just this year. The optics were so bad and included the Cambridges greeting children through a fence and a recreation of a colonialist photo from 1953 of the Queen and Prince Philip standing in an open Land Rover. Prince William gave a problematic speech that landed like an anvil and the Jamaican Prime Minister told Will and Kate live on camera that Jamaica was definitely leaving the commonwealth.

Thank you for commenting, reading and listening to our podcast! We hope you had a great holiday and that you have an excellent 2023! We really appreciate you.

bitchy | Scobie: The Sussexes will likely ‘retreat’ from the royal soap opera this year