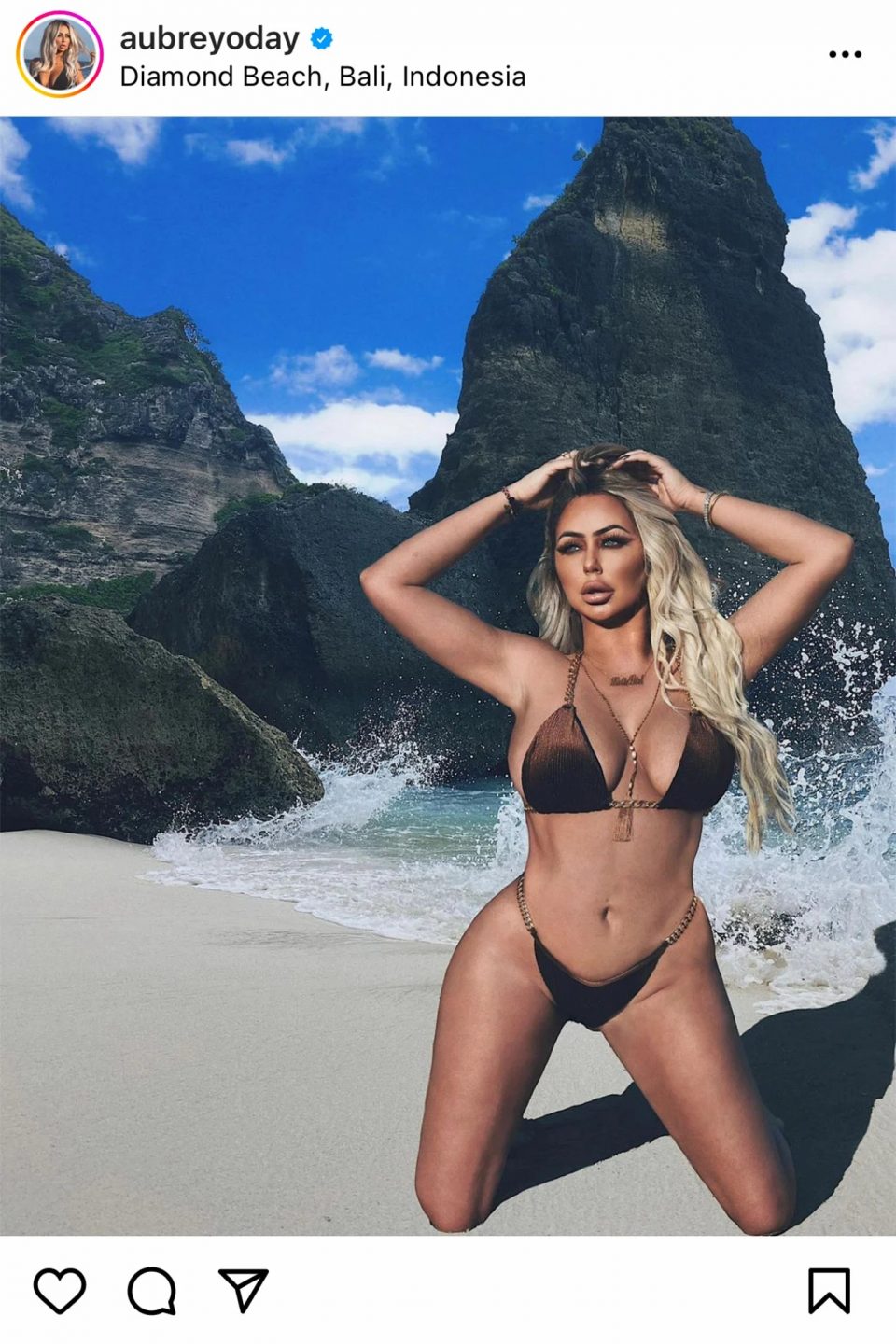 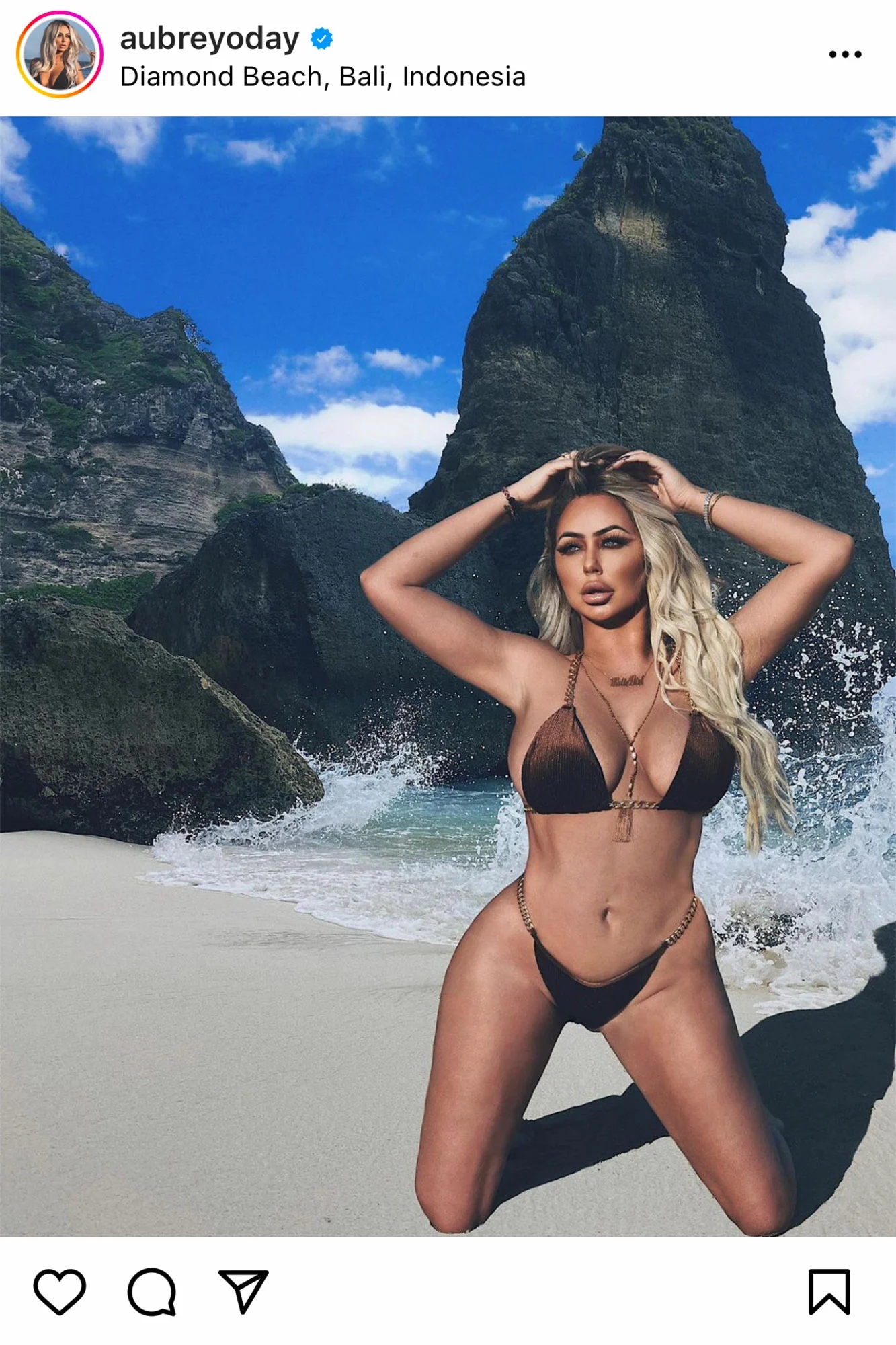 Who would have thought in 2004 that we’d still be talking about someone from Danity Kane in 2022?  After getting her start from Making the Band, Aubrey O’Day has found a way to keep herself in the public eye every few years or so. She even dated a chinless Trump Jr. 10 years ago! Anyway, her latest minor scandal is getting called out for possibly faking her Bali trip by photoshopping herself into others’ photos on Instagram.

A little over a year after the former Danity Kane member announced she was leaving the United States to start a “new life” abroad, she found herself in some hot water for flooding her newly private Instagram feed with allegedly altered vacation photos.

According to O’Day’s geotags, almost all of the images were taken in Bali, Indonesia. However, social media users aren’t buying it.

TikToker @residualdata, whose name is Sophie, believes the pop star “went on this vacation around Bali by just Photoshopping herself into pictures.”

“It’s truly, like, every single picture,” Sophie noted as several of O’Day’s posts flashed across the screen. “I don’t even know if she went to Indonesia, like, at all.”

Sophie chose specific pictures to analyze, including one of the singer wearing an elaborate red dress while swinging from bungee cords tied to palm trees and overlooking a waterfall.

“She either just steals content from other content creators or Photoshops herself onto random promotional images,” Sophie alleged.

The “Making the Band” alum, 38, accompanies her impressive posts with thought-provoking captions.

“There is no linear fashion to life, it is confusing, incredible, hard, beautiful, and surprising.. no guidebook can give you that,” read part of the caption of her red dress swing pic. “Reading a mystery is far more exciting than a textbook. So let’s indulge in the pages of our lives as we write them 🤍🙏🏽.”

But Sophie is not alone in her criticism of the musician, as Instagram users have been calling out her social media activity for months.

“Your dress can’t blow into the wind like that. This photo is going against all laws of nature lol,” “She stole this pic straight out of a catalog breh 😂😂😂😂” and “We love a photoshopped background 🙊” are just some of the replies fans have left on the star’s luxurious snaps.

O’Day has since made her account private. Her reps did not immediately respond to Page Six’s request for comment.

Aubrey made her account private for a while, but it’s available again now. Even to the untrained eye, the photos look hilariously fake. So fake that anyone could tell with just a cursory glance. Maybe she was banking on the whole scrolling thing helping people skim past and not look too deeply? But seriously, if you’re going to go to all this trouble to fake something at least make it look good! What else does she have to do with her time if she’s not actually in Bali? This actually makes me feel a little bad for her. She’s not just posting some fake vacation pics, Aubrey actually said she was moving to Bali to start a new life abroad. And then she posted these fake pics. So did she actually move or is she in hiding somewhere stateside and she’s just trying to make her life seem exciting and new? That’s even more sad than just faking a vacation and it’s reminding me of that Hulu movie Not Okay (hopefully without the fake victim angle). Okay, now I feel sorta bad for Aubrey O’Day. Also, imagine examining Aubrey O’Day’s Instagram that closely (says the woman who just wrote a whole article about it).

Note by CB: After Peridot wrote this, Aubrey addressed the controversy by posting a photo where she’s hugging Jesus while literally showing her ass. She wrote, in the caption to the NSFW post, that she photoshops herself into locations to get the best pictures or something.

I’ve been in this industry for over 20 years and have been traveling the world since I was 7. If I want my Instagram to be curated like a museum of ART then that’s what the f-k is going to happen. I’m an artist, a REAL creator. I do all of my creative from my music to my flicks.. everything from my hair, glam, nails, styling, backdrops, editing, shooting, & the weather isn’t always perfect when I shoot, and I vacation alone.. I don’t need to be flown places. Let alone the fact that a lot of the shots I give y’all are in places you have to spend hours scaling mountains to get to. Respect my aesthetic, I work hard to give y’all beautiful content that feels the way the places I travel vibrate.. because I want y’all to vibrate high with me. lil tok girl, I am so sorry to your place of work that allows you to sit on my page all day with binoculars.. but I suggest you learn this lesson fast: you don’t even need to concentrate on others to be your own version of special and necessary in this world.. you can make positive changes just by using your own gifts.. stop looking left and right if you wanna move forward. 🤍🙏🏽 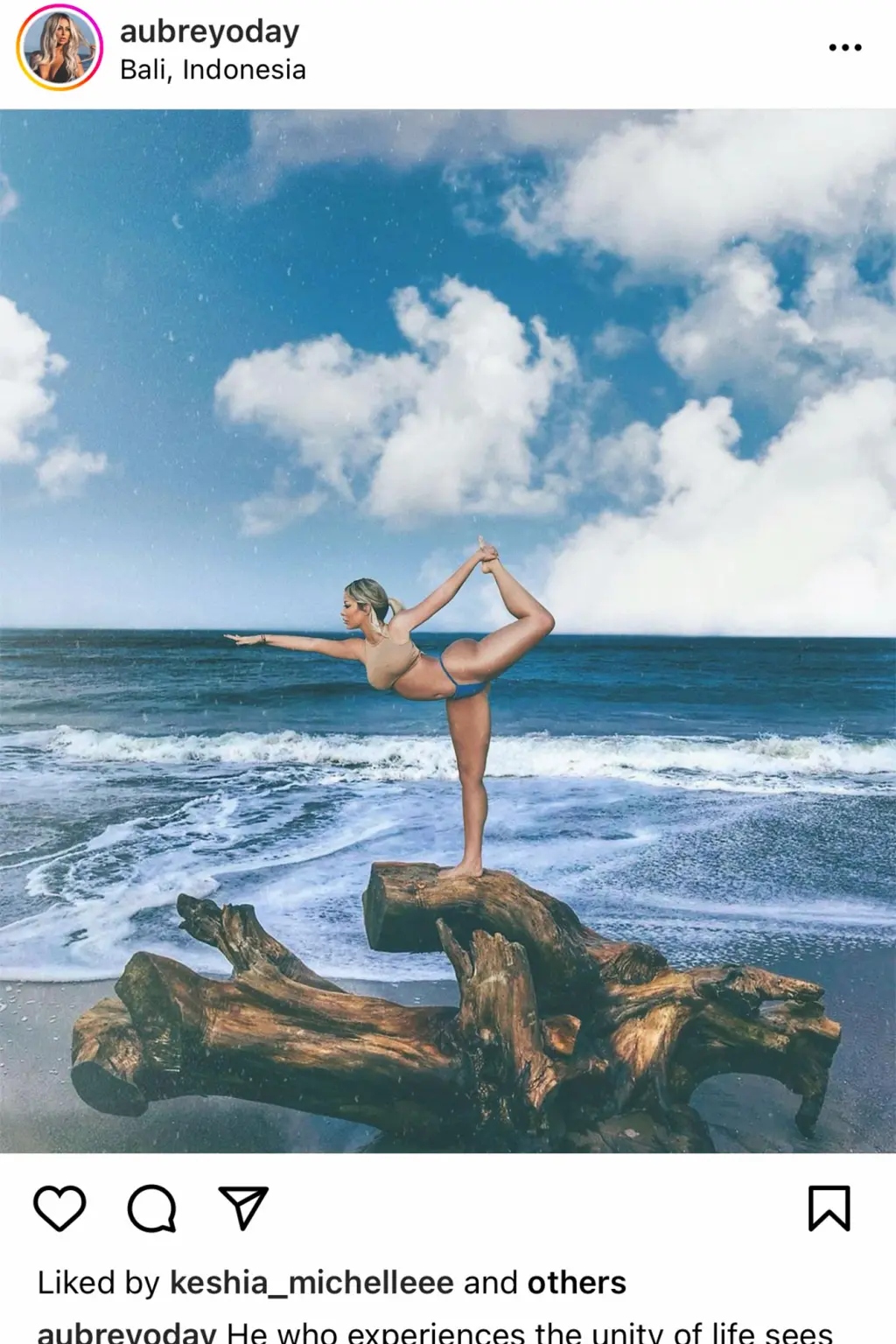