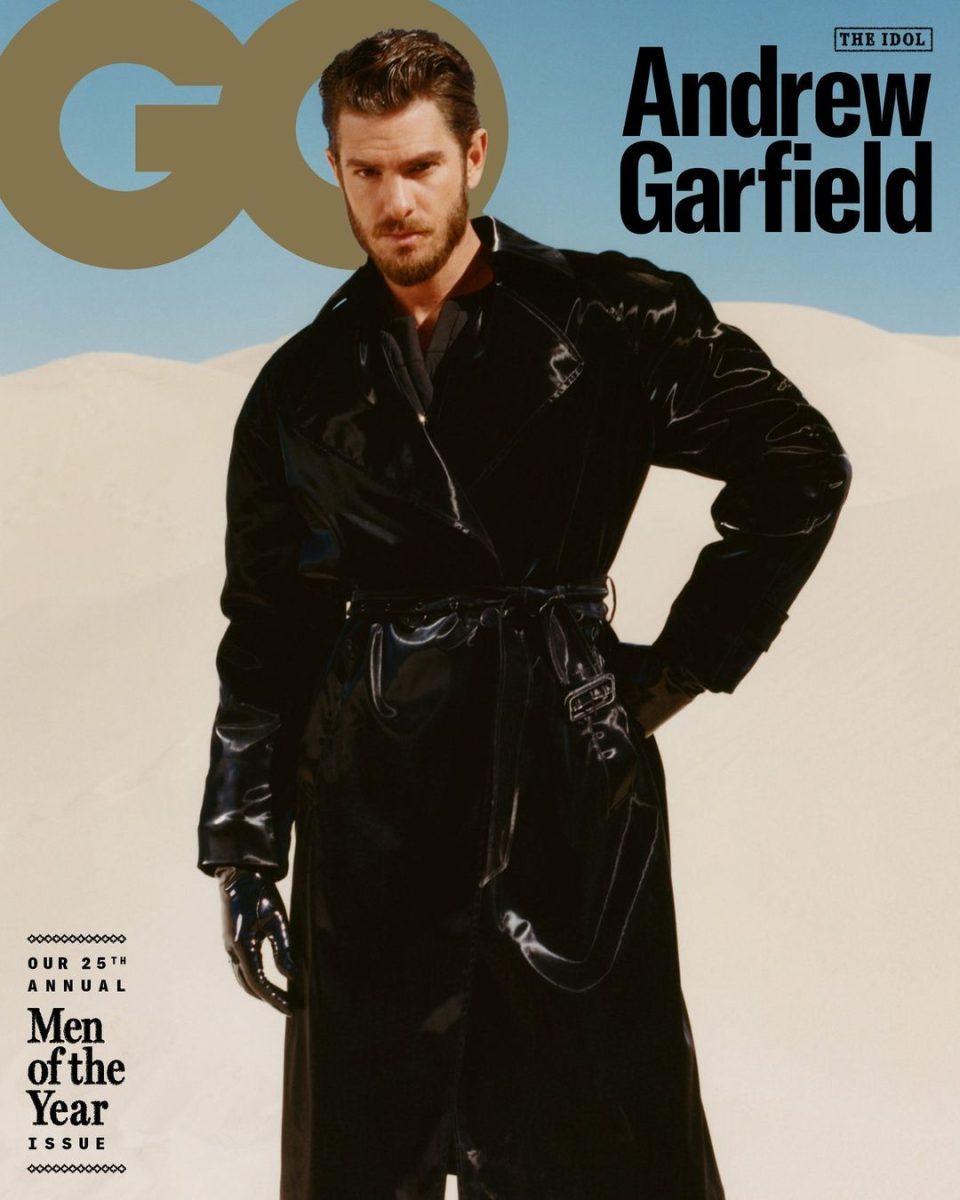 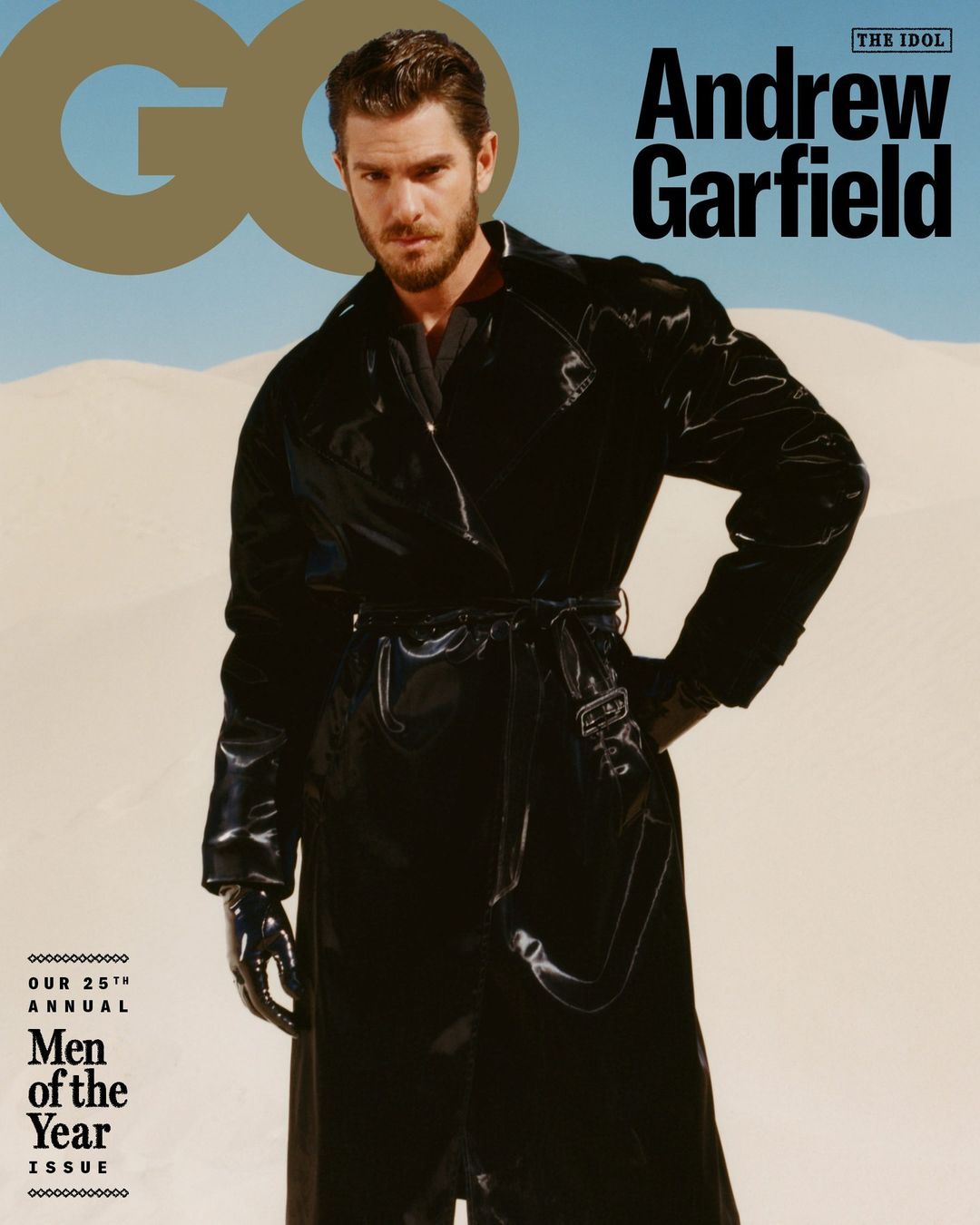 Andrew Garfield is currently in a state of not-working. He’s choosing to not be employed for a while so he can grieve his mother (who passed away in 2019) and get his head together for a second after working on back-to-back projects for several years. His grief is still palpable and his search for meaning of his existence is incredibly moving. Garfield’s interviews are always pretty heavy, and that’s true of his British GQ Man of the Year profile. He talks about religion, his personal philosophy, his grief, and at one point, he sobs. Some highlights:

His time off: “I’m in a real period of not-doing. The usual aggressive, ambitious, driven heartbeat, rapping at the door has subsided for a while…. I didn’t have to force my way into letting myself rest. It was interesting. I’ve been thinking about this a lot, the reason for this weird peace I’ve been experiencing. I think the loss of my mum was a big thing. That cataclysm is a forever-reverberating shift into a deeper awareness of reality. Existence. The shortness of this window we have.”

His spirituality: “It’s that eternal struggle between being devoted to the invisible world, the world of spirit, the world of imagination, creativity, what we know we’re meant to do. But if we were purely devoted to that, it would be much harder for us to put a roof over our heads. So how do we balance that? We’re living through a capitalistic period in the history of humanity. And it’s deeply disgusting and horrific and ugly and all those things, as well as beautiful. It’s a fascinating time to be alive. And how do artists – how does anyone, because everyone is an artist – really retain that connection to soul, to spirit, to the unseen, to the thing that really pulls us? Our own personal genius. Our own personal calling. Giftedness. The Greeks, they call it the daimon. The divine twin. That spirit we were separated from as we passed through the birth canal.

The public freakout about his time off: “Maybe I should just stay on the grind. Maybe I should find something to attach myself to. I’m freaked out now. Just this conversation has done it. I will absolutely get back on it. I will be a slave to capitalism. I’m down. I love capitalism. I love capitalism. I will be a cog in the machinery. I mean, obviously I’m in a privileged position. I’m of a generation slightly older than the iPhone generation. That kind of ‘hustle culture’ – I lived pre-that, I suppose. But it’s a tricky one, because I’m for hard work. I was raised by a swimming-coach father. I like feeling devoted. I like grinding at something that I care about, for sure.

Grief for his mother: “It makes me think about – and it’s funny, I’m sorry, but my reference point for everything now, I just go back to my mum not being here. I just go to that and what that means. It means I’m not gonna be here long, and we’re not gonna be here long. That doesn’t provide any answers, but it does feel like it sharpens an arrow of direction, in some mysterious way. But then, I don’t know – my dad, right now, I think, is just meant to tend his back garden. He’s lost his wife, and I think all he’s meant to do right now, for the most part – it’s going to make me cry – is play with his grandkids, and create this back garden. He’s turned it into, like, a subtropical jungle. He’s got a water feature and a moat. He’s gone crazy, as grief will make you do, but he’s gone toward beauty and nature and self-soothing. And I’m really kind of impressed with him for that. The fact that he’s created something so beaut–[A pause. Garfield tears up] F–k. F–king hell, man. It’s awful. It hurts – the beauty of it hurts, so much. Knowing he’s created something so beautiful out of the worst loss you could ever, like – [voice breaking] They were together, in love. They were an imperfect couple that stayed together. And for him to be left, now, to deal with what that means – I’m not going to speak for his experience, because that’s not appropriate. But I feel like I can say: I feel like making a garden is plenty. You know what I mean? I don’t think we’re all meant to save the world all the time.

He’s turning 40 next year: “It feels far off. I need to start thinking about a good party. If I organise something fun, it’ll be great. And the good news is, all my high school friends, we’re all celebrating [turning 40] together. But it’s interesting – I always thought I would be the first to have kids and settle down, and they’re all shacked up and a couple of kids deep, for the most part. And I’m like… here with you, eating a burger, just contemplating existence. Trying to fill my days with as much nonsense as I possibly can. So that’s interesting. Releasing myself from the societal obligation of procreating by the time I’m 40 has been an interesting thing to do with myself….Where do I start with why it didn’t happen? [Laughs] No, it’s more about accepting a different path than what was kind of expected of me from birth. Like, By this time you will have done this, and you will have at least one child – that kind of thing. I think I have some guilt around that. And obviously it’s easier for me as a man…

It’s interesting to hear him talk about his own struggle with “societal obligation of procreating.” While it’s different for men, it’s not that different for some men, it seems. He’s thinking about how his mother didn’t have grandchildren and his grieving father doesn’t have grandchildren and he always thought he would have a kid by now. The image of his father just throwing himself into his garden too… it’s heartbreaking, and Andrew crying about it is heartbreaking as well. To end on a more positive note, Andrew has been surfing a lot during his break and his body looks amazing right now and he’s never been hotter. I’m sure there are a number of women who would like to have his babies.

bitchy | Mindy Kaling: My kids are ‘so attached’ to BJ Novak, ‘he’s really part of our family’