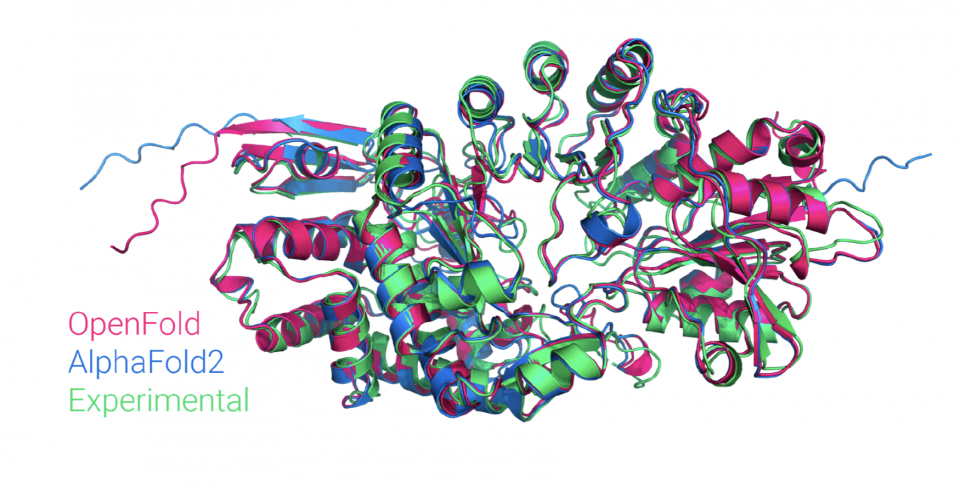 The project, called OpenFold, brings together Cyrus Biotechnology, Outpace Bio, and Arzeda, startups developing new proteins that can be used as drugs or in industrial applications.

“It doesn’t make sense for all of us to replicate the same work,” Cyrus CEO Lucas Nivon told GeekWire. “Especially if it doesn’t give any one company a competitive advantage.”

The three companies are joined by Prescient Design, an accelerator within Genentech, and the laboratory of Mohammed AlQuraishi, an assistant systems biology professor at Columbia University. The project is supported at no cost by Amazon Web Services, and other companies and organizations are discussing joining, said Nivon.

The consortium is improving on AlphaFold, a machine learning tool developed by Alphabet’s DeepMind that predicts how proteins fold into three-dimensional shapes.

Proteins are the building blocks of the body and the basis for numerous treatments. Leveraging this software promises to accelerate the development of new drugs, enzymes, and biomaterials.

DeepMind released a public version of its tool last July, and since then multiple groups have been improving on it. AlQuraishi and his team recently released a version, called OpenFold, that incorporates updated training datasets of known three-dimensional protein structures. OpenFold even slightly outperforms DeepMind’s most recent open version of AlphaFold, said AlQuraishi in a tweet.

Nivon likens the new consortium to Linux, an open-source project that enables the building of new software. He anticipates that some of the new tools will be open-source, and others proprietary.

The focus is on AlphaFold, not a similar tool built by the University of Washington’s Institute for Protein Design, which spun out Cyrus, Outpace, and Arzeda.

“So far, the accuracy we’re seeing from AlphaFold up until now has been unsurpassed,” said Nivon. His team, however, leverages other software spun out of IPD for its designs. And the release of IPD’s tool spurred DeepMind to release a public version at the same time.

Both tools stunned the scientific community with their speed and accuracy at predicting protein shapes, and won the prestigious “Breakthrough of the Year” award last winter from Science magazine.

DeepMind is not a member of the consortium but has spun out Isomorphic Labs, a startup to leverage its software for drug discovery.

OpenFold is a project of the nonprofit Open Molecular Software Foundation and is supported by Amazon as part of its AWS Open Data Sponsorship Program, which also hosts OpenFreeEnergy and Open Forcefield to support drug design efforts.