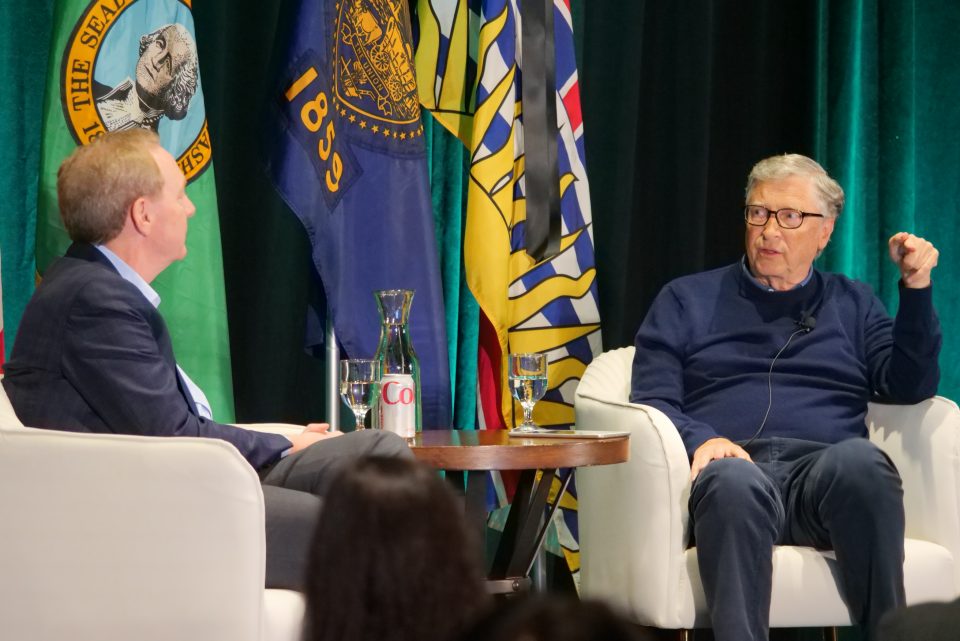 BLAINE, Wash. — Wildfire smoke was hanging over the U.S.-Canada border in the distance as regional leaders from both countries arrived here Monday, an appropriately ominous backdrop for a conference on climate change.

But the opening session of the Cascadia Vision 2050 conference began with a small ray of hope from Bill Gates. The Microsoft co-founder expressed optimism about momentum on two fronts:

The war in Ukraine and the tighter market for venture capital aren’t helping in the short run, he acknowledged, noting that “risk-based capital as of the last three or four months is a little less accessible,” impacting startup valuations.

“But I don’t see companies with good technologies having difficulty getting money,” Gates said. “People believe in this cause enough that I think we can scale them up, get them industrial partners, get them over the finish line. So I’m actually feeling pretty good about climate, because of the pace of innovation.”

The challenge is daunting. Gates’s 2021 book, How to Avoid a Climate Disaster, focuses on the 51 billion tons of greenhouse gasses that are added to the atmosphere annually, and the need to reduce that number to zero to prevent further global warming and avoid the worst effects of climate change.

In the book, Gates makes the case to quintuple R&D spending on clean energy and climate-related technologies in the next decade. He calls on governmental agencies to work with industries, and to use their spending power to boost demand for clean energy to accelerate the pace of innovation.

Those ideas dovetail with the goals of the conference, hosted by the Cascadia Innovation Corridor cross-border initiative, which includes civic and business leaders from Oregon, Washington state and British Columbia. Their goal is to become the world’s first sustainable “mega-region” by pooling resources and coordinating climate initiatives, with a focus on public-private partnerships.

The effort is raising scrutiny and skepticism. Gates’ arrival at the conference in a helicopter drew attention and criticism on social media. At the entrance to the Semiahmoo Resort, where the conference is being held, a group of protesters greeted attendees with a variety of signs protesting Gates, his role in COVID-19 vaccines, and the nature of the Cascadia coalition.

“We’re concerned about the Cascadia mega-region forming behind our backs,” said one of the protesters, Victoria Palmer, with the organization March for Freedom Washington, which opposes vaccine mandates. “We’re concerned that it would be giving too much authority to the mega-region, and bypassing the Constitution.”

The group sees the initiative as an extension of the Western States Pact announced in April 2020 by California, Washington, and Oregon to coordinate their response to the pandemic, an effort it considers unconstitutional.

“We believe that there are public and private entities here today to basically carve up the resources of the new carbon economy,” Palmer said outside the event on Monday. “And so we need to be aware of what’s going on here, because this is going to be influencing Governor Inslee’s climate agenda.”

Panels on Monday focused on topics including high-speed rail and efforts by the region’s major airports to cooperate to build demand for sustainable aviation fuel.

The Cascadia Innovation Corridor was formed in 2016 by the governments of Washington state and British Columbia. Its current co-chairs are former Washington Gov. Chris Gregoire and Greg D’Avignon, president and CEO of the Business Council of British Columbia. The group commissioned and publicly released a study Monday with 14 recommended actions for combatting climate change in the Cascadia region.

For anyone who might have been encouraged by Gates’ opening remarks, Charlie Davis of Boston Consulting Group, one of the authors of the study, gave the crowd a sobering statistic at the outset of his presentation: the ratio of carbon emissions per capita in the Cascadia region is 3.5 times the global average. He said it would require planting 2.5 billion trees to offset enough emissions to get to average.

“Clearly,” Davis said, “there’s work we have to do from an emissions mitigation standpoint.”

With Google’s Mandiant deal pending, Microsoft looks to get ahead in security threat intelligence – GeekWire