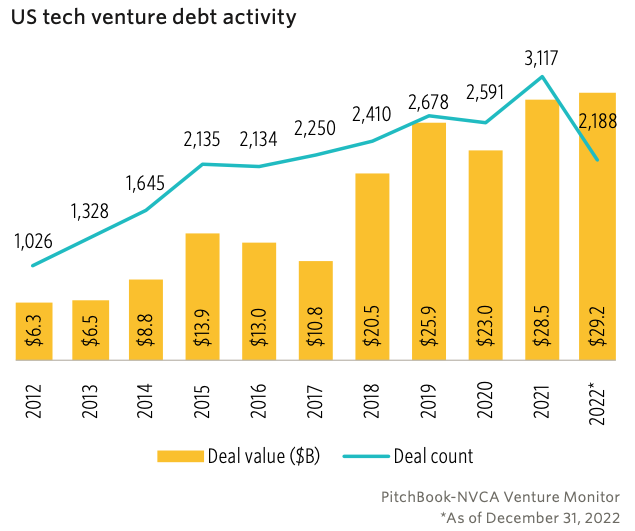 Minh Le has been busy.

As a market manager for Silicon Valley Bank’s Washington and Western Canada region, he helps entrepreneurs access various lines of credit. And last year, as venture capitalists slowed their spending in response to the cooling economy, he had a rush of new clients.

“We’re seeing as much velocity as I’ve seen in the last decade,” said Le.

As traditional venture capital becomes increasingly harder to raise, many startup advisors are telling founders to seek out alternative financing tools like venture debt or revolver loans as a way to secure cash and avoid taking on equity.

Speaking at a Perkins Coie event in Seattle in October, Bonfire Ventures Principal Tyler Churchill said his firm is advising almost all of its portfolio companies to consider what a venture debt facility would look like.

But debt comes with its own set of caveats: increased financial scrutiny, strict guardrails on growth and spending, and obligations to pay back the loan principal.

Still, many startups didn’t even consider debt when the equity markets were hot a year ago, said Zachary Hoene, a J.P. Morgan commercial banker focusing on technology companies.

Lighter Capital, a Seattle lending firm that offers revenue-based debt instruments to early-stage startups, doubled its book size in 2022, marking its best year in history, said CEO Melissa Widner. She noted that Lighter is funding more companies that were on a traditional venture capital path and don’t want to risk a flat or down round.

The rise in venture debt raised comes as VC markets cool. Venture-backed companies raised a total of $209 billion last year, down 36% from the year prior, according to a funding analysis by Ernst & Young.

PitchBook analysts predict that upward trend will continue in 2023. Equity markets will remain harsh, they wrote, pushing many startups to “consider venture debt as a way to supplement their need for equity financings.”

Poor performing public tech stocks can also be a factor in why there has been a renewed interest in debt, SVB’s Le said.

Many startups raised their last equity round at a time when revenue multiples were high, relative to the market, inflating their valuations. With the current down market, startups are likely being valued at that same price or lower, resulting in a potential flat or down round.

Startups are often advised to avoid these scenarios because it could mean more dilution for the founders and their employees, Le said. It also forces their financial backers to have to mark down the company in their portfolio, reporting that drop to their limited partners, he added.

In down markets, it can be “helpful” for startups to raise enough debt to continue to operate their businesses, avoiding any potential down round, Le said.

“Especially growth stage rounds,” he added. “It’s just really hard to get them right now. And so, pursuing debt tends to be a nice alternative.”

“We needed to make sure that we weren’t using venture dollars — which are typically used to grow the business — to purchase inventory,” he said. Bttn landed $20 million from equity investors Tiger Global and others in June.

Taking on debt pushed Bttn to be more financially rigorous, Garwood said. Because the lender requires quarterly audits, the startup needs to know when its customers are going to pay for their purchases. In some ways, this has altered the checkout and sales flow of the business, he said.

“It’s not a downside,” he said of the added financial guardrails. “But it does force you to invest in resources that are able to provide that level of monthly quarterly reporting.”

Hoene, the commercial banker, said another potential drawback to taking on debt is the legal covenants that come attached with the bank loans. He said these could include requirements of annual growth, max burn, or a minimum cash balance.

These conditions could also impose a mindset change on founders, forcing them to take a more conservative approach to growing their businesses.

Debt instruments are typically accessible only to companies that raised equity funding in the past and have some measures of success, Hoene said, making it difficult for newer or less established startups to access this type of financing.

In 2022, more than 40% of all debt dollars deployed into venture-backed companies went to growth stage startups, according to PitchBook.

Venture debt deals are often about 20-to-30% of the amount a startup raised in their most recent equity round. They resemble a sort of insurance, providing a rainy day fund in case it becomes difficult or impossible to raise cash elsewhere, Hoene said.

“It’s a lot harder for a bank to come in with any kind of venture debt facility if you’re under four months of runway,” Hoene said, adding that the legal process to close on terms could take months.

Lenders of venture debt make money by charging interest, origination fees or prepayment penalties. It often has a higher interest rate than a traditional loan, and comes with shorter repayment terms (12 to 24 months).

Most popular stories on GeekWire for the week of Oct. 2, 2022 – GeekWire