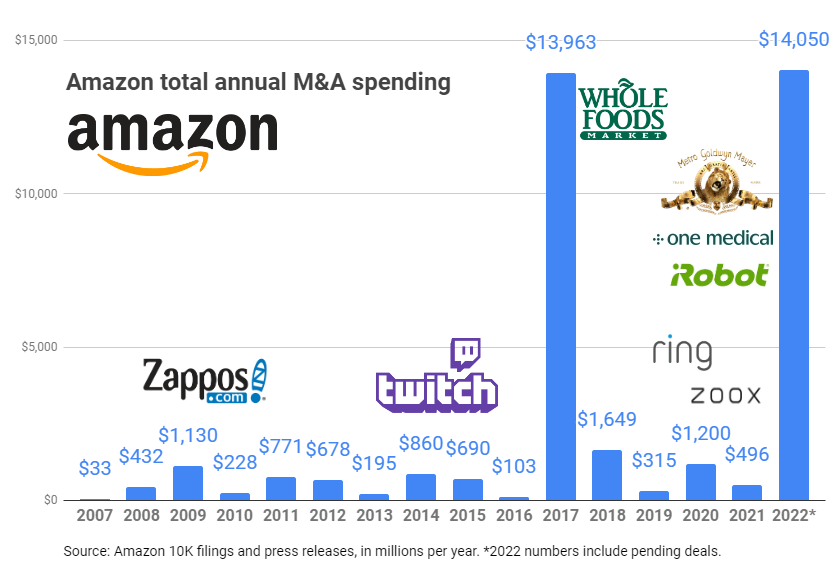 Amazon’s proposed acquisition of Roomba maker iRobot for $1.7 billion could push its annual spending on acquisitions to a new high, when combined with its purchase of MGM for $8.45 billion and its proposed deal to acquire primary care company One Medical for $3.9 billion.

But will U.S. antitrust regulators let it happen?

That is a key question following Amazon’s announcement of its deal Friday morning to acquire iRobot, the Boston-based company behind the market-leading robotic home vacuum.

Amazon to acquire Roomba maker iRobot for $1.7B

As proposed, the deal would catapult Amazon into a leadership position in home robots. The Seattle tech giant has barely scratched the surface of the market on its own following the release of its Astro home robot last year.

Amazon made a similar move in warehouse robots with the acquisition of Kiva Systems a decade ago, providing a technological platform that the company used to dramatically accelerate the automation of its facilities.

The U.S. Federal Trade Commission made its new outlook on tech acquisitions clear with the announcement July 27 that it will attempt to block Facebook parent Meta from acquiring virtual reality fitness app Supernatural. FTC official John Newman scolded Meta for trying “to buy market position instead of earning it on the merits.”

Under terms of the deal, disclosed in an SEC filing Friday morning, Amazon would pay a $94 million termination fee to to iRobot if the deal is ultimately blocked by antitrust regulators.

After launching Roomba two decades ago, Boston-based iRobot reported a cumulative total of 40 million units sold as of last year. In its most recent fiscal year, iRobot shipped more than 5.6 million units, eclipsing the reach of Amazon’s newly introduced Astro home robot, which remains available only in limited preview.

Prior to becoming FTC chairwoman, agency leader Lina Khan made headlines in 2018 for her Yale Law Journal article, “Amazon’s Antitrust Paradox,” advancing a foundational argument in the movement to curb the reach of tech giants.

Amazon’s proposed iRobot deal also comes with its own privacy concerns due to the trove of in-home data to which Amazon would gain access via the Roomba devices, which scan the interior of homes to vacuum autonomously.

In a statement to GeekWire, an Amazon spokesperson said, “Protecting customer data has always been incredibly important to Amazon, and we think we’ve been very good stewards of peoples’ data across all of our businesses.  Customer trust is something we have worked hard to earn —and work hard to keep— every day.”

Consumer Reports, for one, gives iRobot high marks for data security. But the sheer amount of data could give Amazon a competitive advantage, providing a basis for improving and differentiating its efforts in home robotics.

Critics of Amazon were quick to raise red flags. Ron Knox, a senior researcher and writer at the Institute for Local Self-Reliance, said it “may be the most dangerous, threatening acquisition in the company’s history.”

Others pointed to Amazon’s announcement as the continuation of a trend.

“It’s obvious that Amazon is seeking to acquire its way to dominance in the Smart Home market and add yet another intrusive way to surveil their customers,” said Sarah Miller, executive director of the American Economic Liberties Project, in a statement released after the Amazon announcement.

Miller added, “Whether it’s Amazon rolling up Roomba and OneMedical, Facebook acquiring Within, or Google buying Mandiant, Congress needs to step in, shut down Big Tech’s acquisition spree, and fully resource the FTC in the interim.”

From a Congressional perspective, the timing of Amazon’s announcement is notable, on a Friday morning as the U.S. House and Senate break for their August recess, with a closely watched antitrust bill facing an uncertain future.

According to iRobot’s SEC filing, the Amazon agreement sets an “Outside Date” of Aug. 4, 2023, one year from now, as a deadline for completing the deal, with two possible six-month extensions, before a termination fee can be paid.

Amazon did not address the potential for antitrust opposition in the announcement of the deal, other than to say the deal is subject to regulatory review and iRobot shareholder approval, among “customary closing conditions.”

In Russell Wilson’s return to Seattle, Amazon’s ‘Just Walk Out’ tech gets the cheers at new stadium store – GeekWire