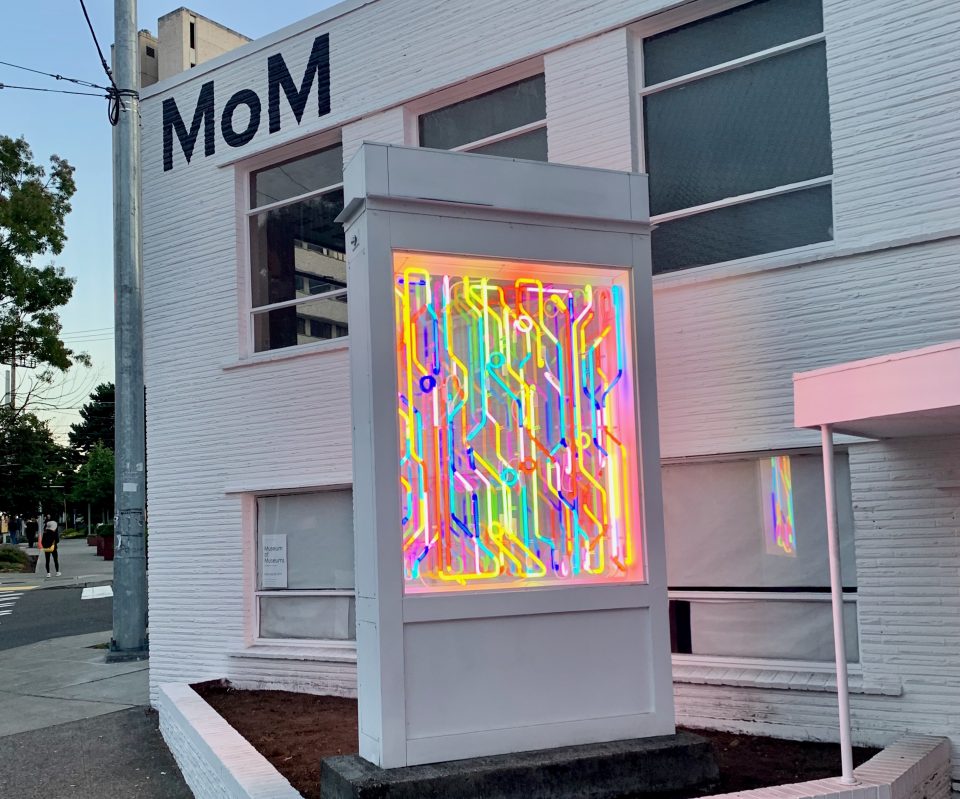 The longtime artist, arts advocate and current director of Seattle’s Museum of Museums was clearly fatigued from the backlash he’d been navigating after a failed attempt at launching an exhibition with overtures to the city’s tech crowd.

“Amazon vs Microsoft” was only a call for submissions last Friday, with a plan to feature artwork created by employees of two of the region’s tech giants.

A week later, “Amazon vs Microsoft” was a canceled idea and the source of bitter commentary on social media and elsewhere about the city’s art scene and tech’s impact on it.

“Mostly it’s been a rough week to see that Seattle, and social media in general, is so quick to judge, so quick to condemn, without deeper inquiry, without kindness,” Lundgren told GeekWire. “There is no middle ground anymore, there is no nuance, there is no margin of error. It is really unfortunate to witness, and a dangerous environment for art and self expression to live within.”

Photographer Charles Peterson was one of those who waded into the back and forth on Instagram.

“I’ve known Greg a long time, and I know he meant well. But it’s just one of those ideas that should have been left on the back of the cocktail napkin,” Peterson said via email. “There’s a lot that’s wrong with it: for me it’s primarily the tired ‘vs’ meme (whats next, Starbucks vs Peets? Boeing vs Blue Origin?), to the patronizing open call (the actual artist/employees of those companies might not be so keen to be called out in that fashion).”

Lundgren opened his first gallery in Seattle in 1997. For 25 years, he said he’s made it a priority to create opportunities for artists and propose solutions for how Seattle could become a better city. He started MoM in 2020, during the pandemic, in a renovated medical building on First Hill.

He’s witnessed a lot of change in Seattle, much of it driven by a tech boom that has fueled hostility toward companies and workers who many blame for upending the culture and affordability of the city.

“Sometimes they work, sometimes they don’t,” Lundgren said of his many varied art spaces and exhibition ideas over the years. “But I think it’s important to keep trying, even when they do not connect, find traction or popular support. The alternative is to sit around and complain about it, stop making art, or leave a city that I love.”

Keep reading for more of Lundgren’s thoughts on the “Amazon vs Microsoft” fallout and his views on Seattle’s art scene and tech’s participation in it. GeekWire also reached out to others in the arts community for their take. Their responses are below. All have been edited for brevity and clarity.

GeekWire: Are you more bummed that your idea fell flat or just frustrated that any effort to discuss the tech community and the art community in the same breath elicits such reaction in Seattle?

Greg Lundgren: “The core idea of ‘Amazon vs Microsoft’ was to continue a dialog around artists’ complicated relationship with Amazon and Microsoft, with the hopes of building a stronger, more inclusive arts community. We succeeded in starting the conversation, and I hope that continues in a constructive way. I did not anticipate the speculation and assumptions behind the premise, nor the level of hostility around the call for art. Our art community holds strong opinions about Big Tech and the people it employs, that are justified and not easily changed. It is Amazon’s and Microsoft’s moment and opportunity to correct that narrative, and I hope that they do.”

What is your overall impression of where art and tech stand in Seattle in 2022?

“Many of the artists and organizations in our region have a very complicated and unspoken relationship with Big Tech. It has more layers than an onion, which makes it difficult to tweet about or properly share on social media. One layer is that the tech boom in our region has made it much more expensive to live here, which would be easier to digest if that same community — both corporate and private — participated more, gave more, found ways to protect and grow our artist communities. Another layer is that Amazon and Microsoft do buy art, underwrite institutions, artists and nonprofits (to date, MoM has never had a corporate sponsor or received money from any company). Do they do it enough? No. Are they getting batter at it? A little.

“Many in our tech community love and support arts and culture. They are our friends and patrons, they buy art and make art and do care about the future of Seattle’s cultural landscape. They are not all one size, one color, one hivemind. And I think their increased participation in our art community can only create a stronger art community.”

What do you think artists actually want from the ‘tech bros’? For them all to leave?

“Many say that big tech ruined Seattle. Some rightly expect more from them and some have given up on them. Some pay their bills with tech dollars — whether they work in big tech or sell work to people that do. It is a complicated, messy, passionate, sometimes hypocritical narrative. Historically, be it the Italian Renaissance or abstract expressionism, many major moments of artistic advancement happened when the artists and the wealthy were in synchronicity. Divided, it is hard to see an outcome where the Seattle art community comes out ahead.”

Is there a place where you think artists have figured this relationship out, and in Seattle it’s still just growing pains?

“I think New York and Los Angeles, Houston and Miami have better relationships between the artist community and the wealthy. Peggy Guggenheim and David Rockefeller were the grandchildren of industrialists. Maybe we are too young, maybe it’s the grandchildren of our tech billionaires that will contribute. My fear is that it will be much too late by then.”

Sharon Arnold is a Seattle arts writer and curator.

Charles Peterson is a longtime Seattle photographer known for documenting the grunge music scene in the 1980s and 1990s and rise of such bands as Nirvana, Soundgarden, Pearl Jam and others.

Vivian Hua, co-chair of the Seattle Arts Commission, is a writer, filmmaker, organizer and onetime executive director of Northwest Film Forum in Seattle.

Vanessa Villalobos, co-chair of the Seattle Arts Commission, is an independent artist, choreographer, and dancer.

Robert Hardgrave is a longtime Seattle painter, illustrator and sculptor.

Murder hornets get a new name, but desire to wipe them out in Washington state remains the same – GeekWire

Amazon is partnering with GNC, PacSun, other retailers to offer same-day delivery – GeekWire