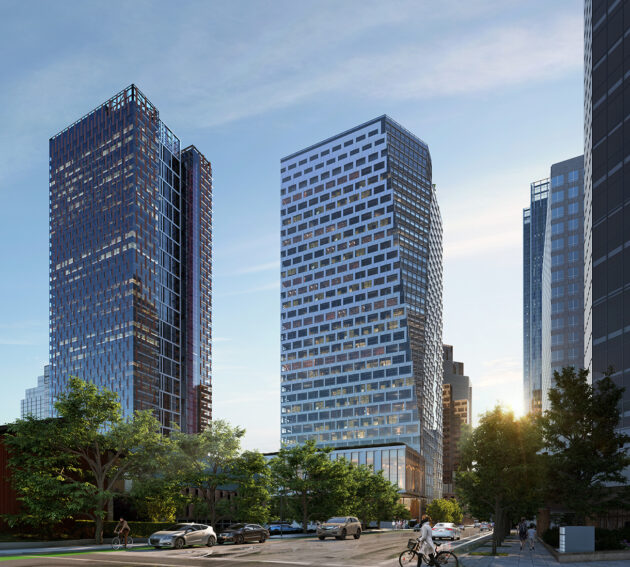 Citing ongoing uncertainty about the impact of hybrid work on its office designs, Amazon says it will pause construction on five towers in downtown Bellevue, Wash., and hold off, for now, on construction of a sixth new tower in the city.

The company says it wants to determine how its office floorplans need to change before proceeding.

The decision underscores the dynamic and uncertain status of the tech industry’s return to the office as the pandemic subsides. Some companies are seeing employees continuing to work from home more than previously expected causing them to reconsider their mix of private offices and shared workspaces, at minimum.

Amazon says it still plans to ultimately employ 25,000 people in the city east of Seattle, where the company has signaled plans to focus most of its future growth in what it considers its Puget Sound headquarters region.

The company provided this statement from John Schoettler, its vice president of global real estate and facilities.

“The pandemic has significantly changed the way people work. For our corporate and tech roles, we’ve adopted a hybrid model that offers employees increased flexibility – each team decides the balance between in-office and remote work that makes sense for them. It’s early days and like many companies, we’re still learning how these new habits may impact our office footprint. Our offices are long-term investments and we want to make sure that we design them in a way that meets our employees’ needs in the future. As we continue to learn, we’re pausing construction to reevaluate the design of some of our projects in Bellevue. This doesn’t affect our plans to bring more than 25,000 jobs to the city, or our commitment to continuing to invest in and engage with the community—including providing affordable housing and supporting local nonprofits.”

In response to GeekWire’s questions, an Amazon spokesperson said the company has no current plans to cancel any leases. The company currently has about 10,000 corporate and tech employees in seven offices in Bellevue.

The company says it will complete the core and exterior shell (in addition to lobby floors, communal areas, and retail spaces) before pausing construction on these buildings:

The 3.5-acre Bellevue 600 site runs from 110th Avenue NE to 108th Avenue NE, near the Bellevue Transit Center and a future Link Light Rail stop. Amazon is holding off, for now, on construction of the 31-story Tower 2 at Bellevue 600

Amazon isn’t providing timelines for pausing or ultimately restarting work on the Bellevue towers, or saying how the decision will impact planned occupancy dates.

The decision to pause construction was reported earlier today by the Puget Sound Business Journal.