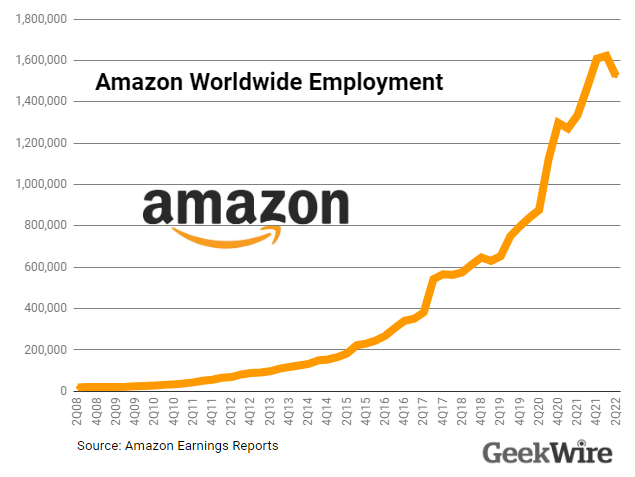 Amazon’s direct workforce declined by 99,000 employees from the first to the second quarter, to 1.52 million people, the largest sequential drop in its history, after overstaffing its warehouses to handle pandemic-driven demand.

Amazon also plans to become more cautious in its hiring at its headquarters and other offices, Olsavsky said.

“I think it’s right for people to step back and and question their hiring plans,” he said, alluding to other major tech companies that are also slowing their growth. “We’re doing that, as well. I don’t think you’ll see us hiring at the same pace we did over the last year, or the last few years.”

Amazon will continue to add headcount in a “very targeted” way, including engineering positions in Amazon Web Services and advertising, while being “very mindful” of economic conditions, he said.

The sequential quarterly decline in employment is a notable indication of the turnover taking place in Amazon’s warehouses. Normally the company would hire to backfill positions, making the departures less apparent.

Amazon’s direct employment does not include those who work for the company’s third-party vendors, partners, and contractors, such as drivers who work for independent companies that deliver packages in Amazon-branded vans.

Even with the quarter-over-quarter decline, Amazon’s employment is still up 14% year-over-year, from 1.36 million people in the second quarter of 2021.

Amazon CEO Andy Jassy told investors in May that the company was determined to get costs under control and return its consumer business to profitability, after doubling its fulfillment capacity and hiring hundreds of thousands of workers to meet heightened demand during the pandemic.

As a gauge of its consumer business, the company posted a $627 million operating loss in its key North America Segment in the second quarter, down from a quarterly operating profit of $3.1 billion a year ago, but an improvement over the loss of more than $1.5 billion in the segment in the first quarter of this year.

At 20, Geocaching still seeks to turn players on to worldwide game – GeekWire