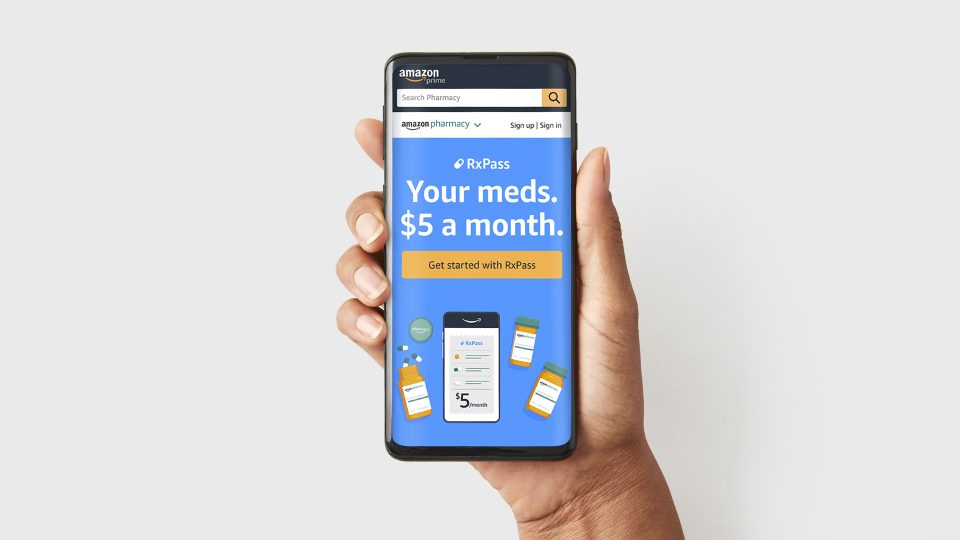 The fee is in addition to the $139 yearly or $14.99 monthly cost of Amazon Prime, the membership plan that provides expedited delivery of goods and other perks at the online retail giant. Delivery of medications under RxPass, part of Amazon Pharmacy, is free of charge.

“We’re excited about the potential impact that this will have for those people on multiple medications. That’s who we think will benefit most from this service,” said Vin Gupta, chief medical officer at Amazon Pharmacy, in an interview with GeekWire.

RxPass is the latest healthcare initiative from Amazon, which announced plans to acquire primary care service One Medical for $3.9 billion in July, and in November introduced Amazon Clinic, a message-based health service that treats a variety of conditions, including COVID-19.

RxPass provides a way for Prime members to save on drugs in addition to an existing benefit that provides discounts at more than 60,000 pharmacies, including Amazon Pharmacy. Under that benefit, customers can save up to 80% over standard industry pricing for generic drugs, according to Amazon.

RxPass offers “additional simplicity, affordability and convenience,” said Gupta. “Month over month, year over year, you can set it and forget it.”

As it builds up new healthcare capabilities, the potential grows for Amazon to combine services or bundle them into Prime, outside observers have noted.

About 150 million Americans take at least one of the available medications available with RxPass, said Gupta, and the service offers a way for the uninsured or underinsured to access them inexpensively.

Amazon’s flat $5 fee for a broad range of medications is “unique,” said Gupta. “To our knowledge we haven’t seen an offering structured in a similar way,” he said.

RxPass should make it easier and more affordable for people neglecting taking their medicine to access it, said Gupta, who is also a practicing pulmonologist, an affiliate faculty member at the University of Washington, and a medical analyst for NBC News and MSNBC. RxPass will “help promote better adherence and better health outcomes,” said Gupta, who joined Amazon in 2020.

RxPass is not available to people on Medicare, Medicaid or other government health programs and is available in most U.S. states, according to an Amazon blog post introducing RxPass Tuesday.

Jody Allen says Seahawks and Trail Blazers not for sale yet, but that time will come – GeekWire

How this Amazon cloud device made it to the International Space Station, and what it did in orbit – GeekWire