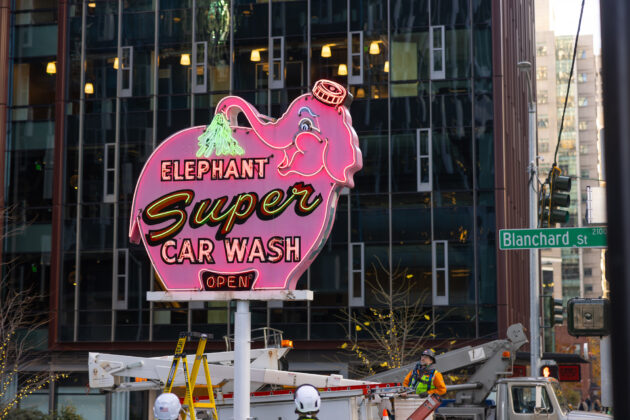 One of Seattle’s beloved neon pink elephants is back up and smiling.

Amazon installed the smaller Elephant Car Wash sign on its headquarters campus on Thursday, relighting a piece of Seattle history that stood just blocks away for more than 60 years.

A crane placed the non-rotating sign atop a white pole at the corner of 7th Avenue and Blanchard Street, a stone’s throw from The Spheres in the shadow of Amazon’s main Denny Triangle office towers.

The Elephant Super Car Wash chain operated a location at Battery Street and Denny Way until closing it in 2020. The larger pink sign, created by Seattle’s “Queen of Neon,” Bea Haverfield, was a standout among the city’s many iconic neon signs. It was donated to the Museum of History and Industry on Lake Union.

Amazon was gifted the smaller sign in November 2020 by Elephant Car Wash owner Bob Haney after the closure. Amazon originally wasn’t sure if the sign would end up inside one of its numerous Seattle office buildings, but the tech giant said it invested approximately $175,000 in restoring the sign through Western Neon, which has worked on such iconic signage as the Rainier Beer “R.”

Amazon said Thursday that it wanted to ensure that the restoration process would not alter the sign’s original design or construction. Rather than strip and match the paint, further damage from “wear and tear” was mitigated by clear coating the existing paint.

“The Pink Elephant has been a beloved landmark in Seattle for more than 60 years,” John Schoettler, vice president of Global Real Estate and Facilities at Amazon, said in a news release. “With Amazon’s presence in Seattle spanning more than 20 years, we see ourselves as part of the fabric of this community. When the opportunity arose for us to be part of the restoration process, we jumped at it. We’re proud to help to preserve a piece of the city’s history.”

Feliks Banel, a KIRO Newsradio host and editor of the Washington State Historical Society’s quarterly magazine, praised the decision to keep the sign out in the elements.

“The fact it will be on display outside — and often in the darkness and rain where it’s been most at home since the 1950s, and just a few blocks from where it stood for decades — means that this sign is likely to become one of Seattle’s most visible and beloved true landmarks,” Banel said in a statement.

The elephant is not the first piece of historic signage Amazon has landed as campus decor. The company said the sign for the old King Cat Theater hangs in its Coral building, also known as Blanchard Plaza, at 2201 6th Ave.

And Amazon also chipped in $250,000 to help repair and strengthen the Macy’s Christmas star, another Seattle landmark, on the old downtown department store in which Amazon now occupies a majority of the floors.