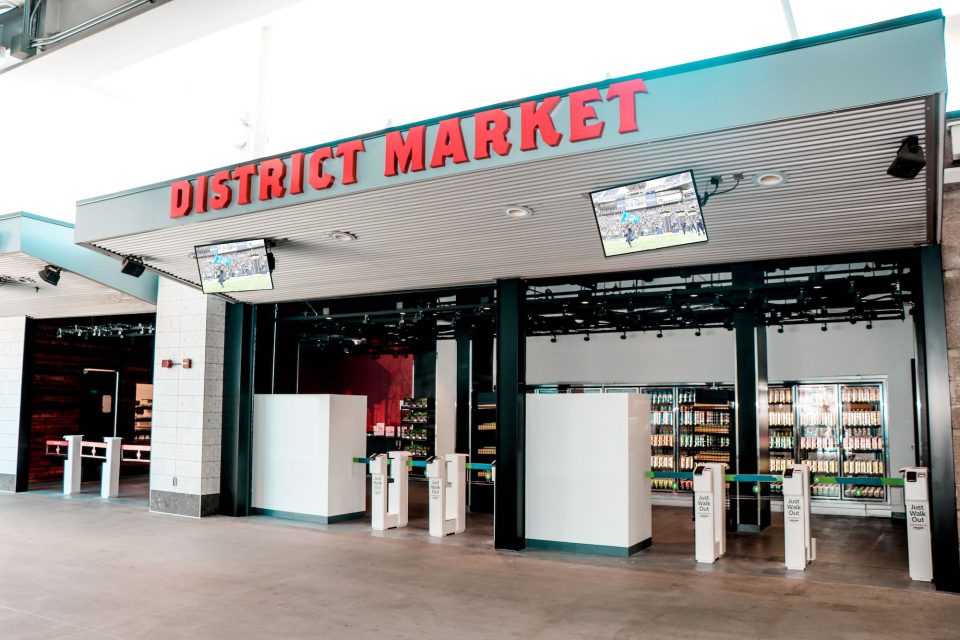 The Seattle Seahawks are switching to a hurry-up offense at Lumen Field this season. But it’s not happening in the team’s play calling, it’s taking place high above the football field where a new food and beverage store will utilize checkout-free technology from Amazon.

The stadium will be the first in the NFL to feature both of Amazon’s signature retail innovations — “Just Walk Out” and Amazon One, the palm-scanning tech for entry and payment.

The technology will be used at District Market, on the upper level of Lumen Field behind the Toyota Fan Deck in section 323. The Seahawks said the area will offer “a more modern, open food and beverage experience” when the team previously detailed enhancements coming to the stadium to mark its 20th year.

Just Walk Out is billed as a faster, frictionless way for fans to avoid concession lines and get back to their seats. The technology is used in Amazon’s Go convenience stores and some of its full-size Fresh grocery stores. It allows customers to enter, select items and leave without dealing with a cashier.

Overhead cameras and sensors track what a customer grabs, and payment is facilitated automatically via a credit card scanned at entry. Customers can also link a credit card to a biometric scan of their palm via Amazon One technology.

“Our goal is to help fans get back to their seats quickly without missing a moment of the action, so we’re excited to see how NFL fans enjoy the new store,” Dilip Kumar, VP for AWS Applications, said in a news release on Thursday.

Amazon licenses the tech for use in such places as stadium and airport stores. Lumen Field will now join Seattle’s other professional sports venues in using Just Walk Out. It’s in use at three stores in Climate Pledge Arena, where the Seattle Kraken play, and at T-Mobile Park, home of the Mariners, where it was introduced in May at a new “Walk-Off Market.”

GeekWire previously tested the technology and talked to fans at Kraken and Mariners games, where the overall sentiment was that getting in and out of a stadium store faster was a big plus.

“It’s fantastic, there’s no line,” one fan said during the first NHL game at Climate Pledge Arena. “I got a beer in eight seconds.”

“This is way cooler than standing in line,” a Mariners fan told us when Just Walk Out debuted at T-Mobile Park.

District Market will offer a selection of assorted beer, wine, seltzers, and non-alcoholic beverages, along with snacks and food from the stadium’s neighbors in Seattle’s International District. Fans will be able to enroll in Amazon One at kiosks located outside the store.

Amazon is partnering with Lumen Field and stadium hospitality partner Levy as well as and DBK Studio, Levy’s innovation studio. The technologies are scheduled to be in place for the team’s home opener on Sept. 12.