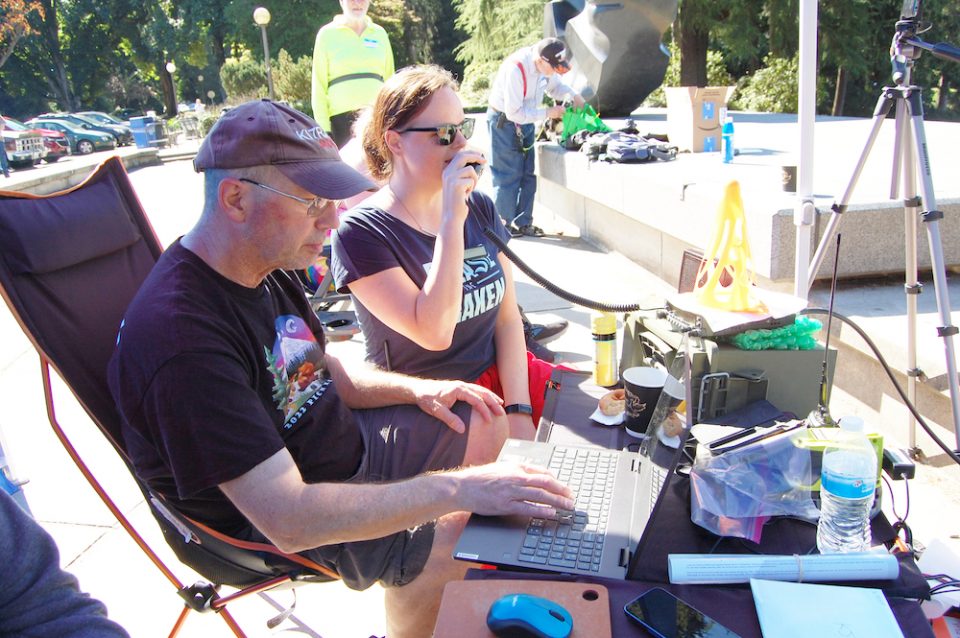 When was the last time a total stranger, or even an acquaintance, gave you three minutes — three whole minutes — to share whatever was on your mind?

In the age of social media, we all have bigger and more powerful megaphones than ever. But attention spans are shorter than ever, and the reality is our friends, family and colleagues are likely to doomscroll right past what we’ve shared on Facebook, Twitter and Instagram — especially if it’s a read that takes three minutes or more.

Yet, a group of Puget Sound-area amateur radio enthusiasts are finding a way to be heard — and taking the time to hear each other — using technology that’s more than a century old.

Each day, the Puget Sound Repeater Group, an organization of local ham radio enthusiasts that celebrated its 50th anniversary this year, take to the airwaves for three broadcasts, known as “nets” — once at 9 a.m., again at noon and again at 9 p.m.

The chats can include more than 50 people. Most are from the Seattle area, but voices can appear from as far away as Europe, South America and Australia.

Ham radio nets can resemble a primitive Discord server or even an America Online chatroom circa 1994. After providing their call sign — a string of letters and numbers that identify them on the air — each participant is given up to three minutes to talk about whatever he or she wants — a recent trip, a new job, what’s happening with the kids or whatever else the day brings.

On Aug. 22, the PSRG hosted its 1,000th consecutive “noon-time net.” Jack Wolfe, who started the local tradition, said the milestone underscores ham radio’s dogged popularity more than 120 years after the first amateur radio broadcast and despite the advent of much more modern means of communication.

In fact, the PSRG’s membership includes a large contingent of Seattle tech workers — engineers, coders, product designers and more — who share a common preoccupation: Obsessive tinkering with science and technology.

“This is a friendly group of kind-of nerds,” said Mike Koss, who joined Microsoft in the early 1980s and was an early member of the team that built Outlook, Microsoft’s flagship email client. Koss also invented Microsoft Sharepoint, one of the first cloud file-sharing drives.

Koss, who recalled gabbing on radios with truckers as a teenager, said he joined the local amateur radio club earlier this year after he decided to return to his childhood hobby. He said he’d bought an assortment of radio equipment for a trip to remote Alaska and was reminded of how much he’d enjoyed the hobby. So he got a new ham radio and joined the PSRG.

Earlier this week, he said, he and his wife were camping in their Sprinter van in Southern Oregon. He raised an antenna attached to the van, fired up his portable ham radio station and before long connected with people in Ukraine, Russia, Canada and Finland.

“That was kind of a cool thing,” he said. “You can talk to someone using your own gear, your own equipment, not connected to the grid in any way and doing it yourself.”

Koss said ham radio is twice as popular in the U.S. today as it was in 1970. There are more than 700,000 licensed ham operators in the U.S. and more than three million worldwide, Koss said.

Wolfe said he started hosting the “Noon-Time Net” radio gatherings shortly before the pandemic sequestered everyone in their homes. The timing, he said, couldn’t have been better.

Eight people chimed in on the first day, Wolfe said. Soon there were 18. More and more took to the airwaves as, month after month, the pandemic plodded on.

The “Noon-Time Nets,” Wolfe said, became an antidote to the isolation and loneliness of lockdown. If people called out across the airwaves at noon each day, they could rely on a simple fact: voices would break through the static and answer.

“People just needed to talk and vent and share whatever’s on their mind,” Wolfe said. “It’s like a pressure-release valve.”

Today, Wolfe has made contact with more than 35,000 ham operators worldwide. He’s recorded each one in a Google spreadsheet.

Today’s amateur radio operators use much of the same technology and techniques discovered by Guglielmo Marconi, who is credited with inventing the first radio at the beginning of the 20th century and rapidly developed equipment that could broadcast thousands of miles. Amateurs jumped on the airwaves as quickly as Marconi’s technology became available, and a group of Columbia University students formed the first wireless club in 1908.

Beginners can get started with a requisite FCC license and equipment that costs as little as $50, Wolfe said. From there, like so many tech hobbies, costs can climb into the thousands as operators upgrade their radios and buy supplies to build their own equipment.

PSRG members said they pride themselves on the club’s inclusivity (the word appeared in conversation after conversation) and will help new members study for their FCC tests, which some members are certified to administer.

Quentin Caudron, who has a PhD in computer science and is known across the airwaves as K7DRQ or “Dr. Q,” said he thought ham radio “sounded silly” when several of his “highly technical” friends first introduced him to the hobby.

“I thought it was really old-school and weird,” he said.

Today, Caudron builds his own antennas and serves as PSRG’s club secretary.

“It’s an experimenter’s hobby,” he said, “for people who like to play around and try new things.”

The PSRG has positioned repeaters around the Seattle area, from Cougar Mountain to Capitol Hill, and the club’s members use them to broadcast across the country and the world, outmaneuvering the earth’s curvature by bouncing their signals off the ionosphere, a layer of the earth’s atmosphere about 600 miles above sea level that’s electrified by solar radiation.

Late-night hours are perfect for reaching other radio users on far-off continents because the ionosphere’s composition changes when it’s untouched by the sun’s energy. Under these conditions, short-wave and AM radio signals are endowed with strength they wouldn’t have in the daylight and can reach thousands of miles.

“At night it really opens up and you get to talk around the world,” Caudron said, adding that he recently connected with a man who had spent decades “building a nice little radio station” in Japan, not far from Mount Fuji.

“It sounded very peaceful,” Caudron said. “You never know who’s on the other side.”

Chevonna Vercueil said she’s bounced signals off the ionosphere to reach “all of Europe and around the world.” She’s also contacted people on remote Mauritius Island in the Indian Ocean.

‘You can really explore some cool stuff’

Ham radio operators are also known to bounce signals off the moon, auroras, even meteors and radio-equipped satellites.

“You can really explore some cool stuff,” Caudron said, plucking his cell phone from his pocket and using an app to track satellites’ orbit. As he studied his phone’s screen, Caudron pointed to one passing overhead that would be perfect for magnifying a radio signal.

Similar phone apps can also be used to track the International Space Station and chat with the astronauts aboard as their orbit — at a clip of 17,500 miles an hour, which has the space station ringing Earth once every 90 minutes — brings them briefly within range.

The ISS is equipped with two radios — one its astronauts use to talk with school students in their classrooms and another that serves as a simple repeater, Caudron said.

All you need is a handheld radio and a signal-boosting antenna known as a “Yagi” to make contact with the astronauts, who respond according to a set of communications protocols.

“We’ve got you up here at a 5-9,” the astronauts say, meaning they can hear the terrestrial operator’s voice loud and clear. “Thank you. Warm regards.”

“The excitement is unbelievable” the first time radio operators hear an ISS crew member’s voice, Vercueil said. “Some people are into that in a big way.”

Radio enthusiasts are known to take their hobby down any number of endlessly deep rabbit holes. Some get into amateur radio just to do Morse Code.

Others focus on how far their signals can reach and how many people from far-off countries they can contact. Some augment their radio setups with web connections that amplify their signals. Others go old-school, relishing in the challenge of reaching across the globe using low-power equipment.

One PSRG member builds antennas in his kitchen out of pots and pans and spatulas.

“He’s like a mad scientist,” Vercueil said. “I still don’t know how he’s doing it.”

There are also ham enthusiasts who get a special certificate to assist during an earthquake or other disaster that takes down the power grid and disables traditional communications. In fact, the promise of being able to communicate with other family members during an emergency often brings new operators to the hobby, the Repeater Group’s members said.

Ham operators are the last line of defense when it comes to communications during a disaster, said Vercueil, who regularly participates in drills and exercises in preparation for such an event. Amateur radio stations, she said, can coordinate relief flights and track the movement of planes, emergency equipment and rescue workers during a disaster.

“It’s acting like the control tower that’s down,” Vercueil said.

In mid-July, Vercueil hosted her own nets from her home country of South Africa while visiting family. She said she’d brought with her a battery pack and a radio setup designed for her by a top executive at Blue Origin, Jeff Bezos’ Kent, Wash.-based spacecraft company.

“You should have heard the excitement,” she said of the ham users who logged on for a rare chance to connect with a South African radio. “It was fever-pitched.”

The South Africa broadcasts were especially challenging, Vercueil said, because the country’s aging power grid, which is beset by theft, vandalism and corruption, shuts down three or four times each day.

“I was hosting my net by candlelight,” Vercueil said, adding that she kept her listeners posted on what was unfolding. “It was exciting for folks back in the States.”

During the 1,000th Noon-Time Net, crackling gave way to a single beep at 12 p.m. on the dot and the airwaves came alive with voices. People enthusiastically called out their call signs — “Kilo Juliet Seven X-Ray … W7DNT … N3QPK … KE7NOR … KC7 Zulu 7 Delta” — and then gave their names and locations.

So many chimed in at once (the phenomenon is known as a “pile up”) you could barely make out what anyone was saying. But Wolfe has been doing this long enough he recognized several of the voices in the fray. He read the call signs back so each “station,” as radio setups are known, so they knew they’d been heard loud and clear.

Operators broadcast from Seattle, Bellevue, Olympia, Federal Way, Mill Creek and other nearby cities. The radio waves carried one man’s voice all the way from Galveston, Texas.

Wolfe, who was broadcasting with a portable 10-watt radio and battery pack from Mount Maxwell in Canada, sounds a bit like a commercial radio DJ when he hosts these nets. He’s friendly, and speaks at a quick clip, smooth and with purpose.

“Nice to hear you today,” Wolfe would tell the operators. “Thanks for dropping by.”

In all, 28 men and women signed on. One woman noted during her three-minute report that her parents, also amateur radio enthusiasts, were listening with her, and she provided their call signs along with hers. One man said he was about to take a new job in Hood River, Ore. Another woman said she was eagerly waiting for her lunch — burritos from a favorite restaurant in Seattle’s Beacon Hill, for which she gave an enthusiastic plug.

Most congratulated Wolfe on the day’s milestone, which they agreed was a worthy accomplishment, and thanked him for showing up each day on the air.

“Have a great net, Jack,” one woman said.

Stripe Sweaters – With Love From Kat

Sometimes you should listen to your lawyer