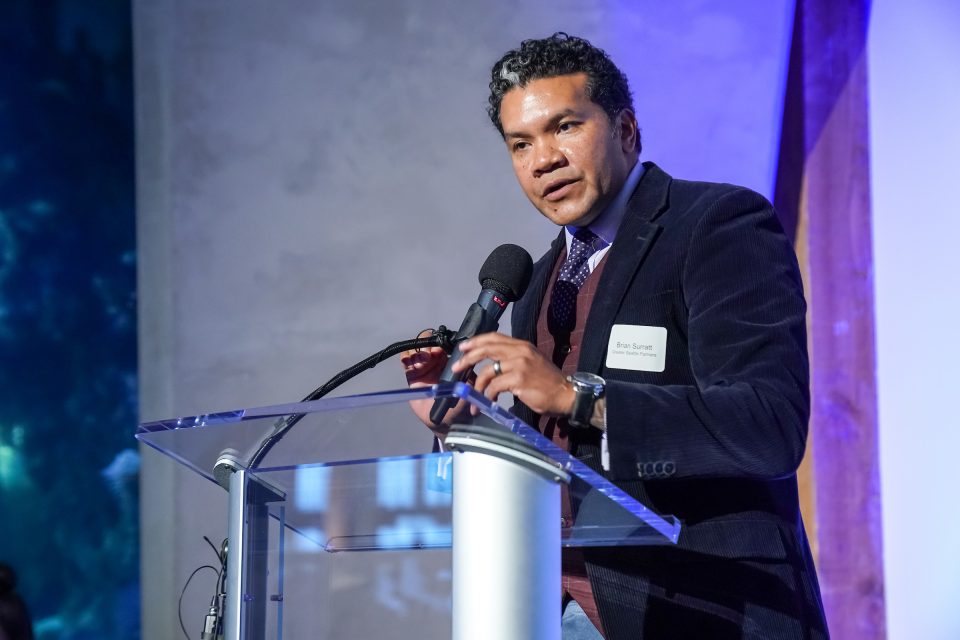 Brian Surratt spent 13 years working for the City of Seattle, including 2 1/2 leading the agency focused on the city’s economic development. In a role he’s held for seven months, Surratt is still concerned with growth, but his focus has turned regional.

Surratt is the CEO and president of Greater Seattle Partners, a public-private sector initiative that seeks to attract investment, companies and quality jobs in the region that includes Seattle, Bellevue, Everett, Tacoma and numerous points in between.

“I’ve spent the first several months on the job getting a deeper understanding of the ambitions of other parts of the region,” Surratt said in a recent video chat with GeekWire. “Where do they want to go? How do we tell our story collectively as a region?”

He said the role has widened his eyes and given him a deeper appreciation for what might draw someone to the region other than Seattle and its status as a leading tech hub. And GSP’s aim is to get that story out beyond the upper left corner of the country.

“In order for us to be successful we have to project to the world,” Surratt said. “The things that we create here, the people that we bring into our region, they’re successful because they understand there’s global success to be had.”

We recently caught up with Surratt and covered several topics, including:

Keep reading for more from this GeekWire Q&A, which has been edited for brevity and clarity.

GeekWire: What does Greater Seattle Partners do?

Brian Surratt: Our primary focus is attracting national and international companies and investment and talent to our region. We want to tell our story, we want to market the region, we want to be present at various domestic and international trade shows. The past several months we’ve been hosting a lot of international visitors and delegations. I would make a bet that you’re not going to find a much more diverse public-private partnership outside of GSB. From Snohomish County, city of Bellevue, Alaska Airlines, Amazon, Boeing … our board and our partners reflect a really unique connection between the public and the private sectors when we talk about about our economic health.

How are GSP and the region recruiting in today’s world, during an economic downturn?

Our region has long been blessed with its sheer diversity. We don’t put all of our eggs in one basket — I think we learned that lesson back back in the 1970s when it was Boeing and nobody else. That being said, we’ve got the big heavies — Boeing, Microsoft, Amazon — and they have a clustering effect. From a recruitment standpoint, people still want to be here because they want to leverage all those assets that we have in the region. When I look at the landscape, the regions that are going to be the most successful are the ones that are going to be out competing on talent, because capital and businesses will follow people. I look in many ways at California and Texas as our primary competitors and when you talk about business climate and our innovation space I would go toe to toe with them. And also culturally, we’re a much more welcoming and open place.

How have the last two years and remote work impacted that? Are you seeing people say, ‘I don’t really have to be in Seattle, I can be anywhere’?

It depends on the industry sector and the location. The broader tech world in many ways has been able to be much more flexible and figure out how to do the work-from-home piece and that becomes a really important part for employee recruitment and retention. That being said, you’re starting to see an uptick in people coming back to the central city. I’m on the board of the Downtown Seattle Association and just saw some new reporting that we’re back to a little over 40% of workers coming back into the core. A far cry from before the pandemic, but also a significant jump since the trough and far outpacing San Francisco and L.A. and some of our other peer cities on that front. The question around where people are wanting to work speaks to our region as a whole. We’ve got to examine opportunities to expand job centers throughout the region, it doesn’t have to just be Seattle and Bellevue. How do you look at communities that have historically been strong employment centers — Tacoma, Everett — and where people are? We need to figure out as we grow, how do make sure that our jobs are dispersed and we meet people where they are.

What’s it been like coming to this role from your City of Seattle job?

I’ve been in this region since the summer of 1998 and I’ve seen all kinds of machinations and evolutions of Seattle and this region and the economy. I’ve always known how dynamic and diverse our region is, but being in this role it’s a much deeper appreciation of the scale and the reach of our regional assets. I think about the explosion of advanced manufacturing in Everett; Snohomish County has really pushed on tourism; clean energy in Tacoma; understanding some of the tribes and their economic development arms; innovations in hydrogen and maritime … there’s so many things happening across our region outside of the city of Seattle. Labor and capital markets don’t care about political boundaries. I think we’ve matured as a region — Seattle’s success is the region’s success, Bellevue’s success is the region’s success.

So there’s less focus on a Seattle vs. Bellevue mentality because regionally it’s all a plus?

We rise together. I don’t believe in false choices like that, especially when it comes to the economy. We’re fortunate that Seattle has this diversity and I want to be able to offer a lot of different choices to the companies that we talk to nationally and across the world. Our job is not to say, ‘You should go here because of X.’ We say, ‘Here’s the full menu. And here’s all the attributes that the various communities have.’ We want to give them the best information to make their decisions. Bellevue’s success has been phenomenal and we should all be celebrating that. I want to see the same level of success in Everett and Tacoma and our friends down south in Auburn and Kent.

Do you consider Amazon to be good for the region?

Absolutely, yes. Amazon over the past five years has led the nation in outbound foreign-direct investment, capital expenditures, jobs, projects created. Their expansion into Bellevue, in my opinion, reflects their growth as a company. The game is about attracting talent and retaining talent. When I was at the City of Seattle when Amazon made the big expansion to make sure that their HQ in the heart of downtown had all the amenities, it was about attracting talent. Their expansion into Bellevue is also, in my opinion, about talent as well. As their workforce has matured, folks want different options, they want proximity to their homes. They saw their workforce increasing on the east side of Lake Washington. This has been a net positive several times over to have Amazon in this region and continue to grow. What I’ve appreciated with Amazon in recent years, they’ve leaned in to a lot of conversations around affordability and what it takes to be a healthy region. Their housing equity fund has been a strong signal of their willingness to invest directly in the community.

How much responsibility do you think the region’s bigger companies, and tech giants in particular, have in helping to solve issues such as housing affordability and homelessness and other issues brought about by income disparity and growth?

We all have a responsibility to make sure we grow equitably. And our hometown companies are doing their part. Microsoft and Amazon have committed billions of dollars to address housing affordability. Challenge Seattle, a coalition of our 21 largest regional employers, is working to help address homelessness and workplace equity. At GSP, we hope to expand job hubs throughout the region to ensure everyone has equitable access to our economy. Again, we all have a role to play. Public-private partnerships are key and the regions that can figure this out will be the most successful. We can do it here.

How does GSP use data and analytics to ensure economic growth?

Companies look to us to provide them with specific information around various sites that they may want to visit — we look at workforce stats across the region and local communities; we have a pretty good sense of real time real estate costs; we have great connections to our utilities, understanding what utility costs are. We also have regular communication with our partners at the local economic development level, understanding various sites they may have and other economic data. How all those things link is kind of our job. At the end of the day, what is it going to cost a company to set up shop in a specific location? That’s what we provide.

You were talking about diversity of industry here. Has any sector surprised you in any way with its resiliency over the last two to three years?

I don’t think anything’s surprised me through all this. In this region, life sciences has been kind of the holy grail from a tech innovation standpoint. We feel that we’ve always been a second-tier region and now and what we’ve seen over the past few years is that we’re starting to creep into that that top-tier region with life sciences. The cycle has always been, ‘Oh, we have an interesting discovery and potential product line and then it gets acquired by a larger multinational pharmaceutical and we have to repeat again.’ We now actually have a level of depth and diversity in life sciences that we haven’t had really ever in this region. We have the Fred Hutch and the UW being more intentional with spinouts — Institute of Protein Design for example — and venture partners leaning into that convergence of cloud computing and life sciences and really staking out a claim for Seattle as a global leader. We’ve always had those assets. It took some time for it to show itself.

I try to come into into the office at least two, three times a week. I’m embracing the new reality of work from home, but I appreciate the fact that we do have a space and being downtown, seeing the vibrancy, is really, really important. Because at the end of the day, people need to connect. Business is obviously about innovation, it’s about new ideas, and it’s also about that connection with folks. So I’ve spent most of my time doing a roadshow with our regional partners, really trying to get a sense of what the ambitions are of our partners. Whether you’re in Auburn or Everett, you’re proud of your community and I want to lean into that. Part of my job is to channel that energy and bring them up to a regional narrative that is authentic, that’s compelling, and that ultimately brings new investment.