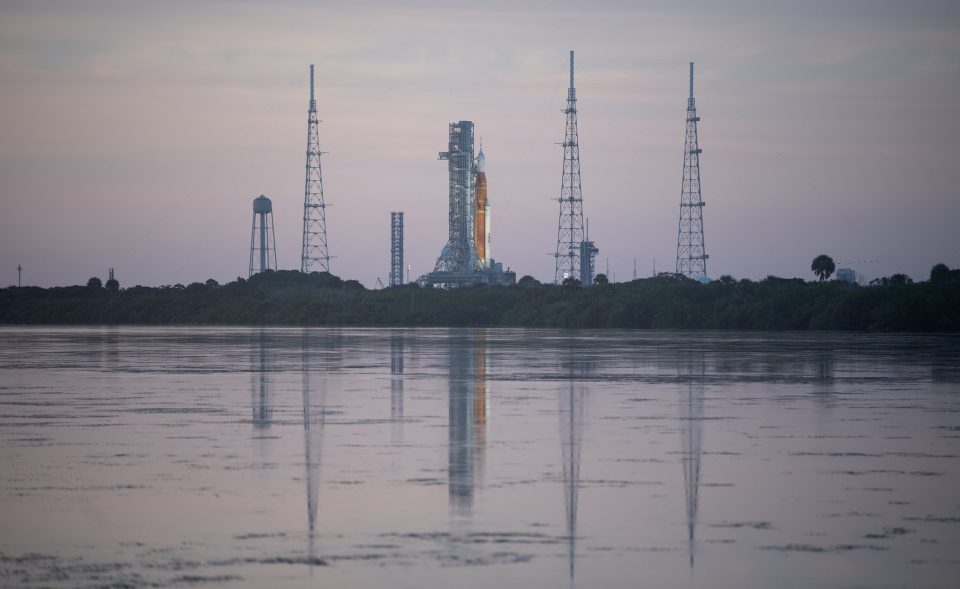 NASA is counting down once again to the first-ever liftoff of its Space Launch System rocket for an uncrewed round-the-moon test flight that’s expected to set the stage for future lunar landings.

Launch from Kennedy Space Center in Florida is scheduled during a two-hour opportunity that begins at 2:17 p.m. ET (11:17 a.m. PT) Saturday.

Live online coverage of tanking operations is due to start at 2:45 a.m. PT on NASA TV. Full launch coverage in English will kick in at 9:15 a.m. PT, with Spanish-language coverage starting at 10 a.m. PT. (Check out the full schedule.)

The blastoff of the SLS rocket — which outranks the Apollo era’s Saturn V as the most powerful launch vehicle ever built for NASA — should be a spectacular sight. But that’s just the beginning for a 38-day mission marking the first time in nearly 50 years that a spacecraft designed to carry humans has gone as far as the moon.

NASA’s mission plan calls for the SLS to send an Orion spacecraft on a looping trip that would come as close as 60 miles to the lunar surface, and range as far out as 40,000 miles beyond the moon.

This time, Orion won’t be carrying any people. Instead, three mannequins outfitted with sensors will gather data about radiation exposure and other environmental conditions inside the capsule. There’ll also be an Alexa-type virtual assistant nicknamed Callisto, which is being provided by Amazon in collaboration with Cisco and Lockheed Martin.

One of the key moments of the mission will come when the Orion spacecraft hits the atmosphere at 25,000 mph on its way back to a Pacific Ocean splashdown. That will put Orion’s heat shield to its sternest test, at temperatures ranging as high as 5,000 degrees Fahrenheit.

If this test flight goes well, that would clear the way for NASA to send a crew of astronauts on a similar round-the-moon flight for Artemis 2 in the 2024 time frame. The milestone lunar landing would come on Artemis 3 in 2025 or 2026.

NASA called off its first launch attempt on Monday, primarily due to an issue involving the cool-down procedure for the four Aerojet Rocketdyne RS-25 rocket engines on the Boeing-built SLS core stage.

The pre-launch procedure calls for “bleeding off” some of the super-cooled liquid hydrogen fuel from the SLS’s tank to bring the engines’ temperature down to the required level of around 420 degrees below zero F. During Monday’s fueling operation, a sensor indicated that one of the engines wasn’t getting cold enough.

Engineers couldn’t resolve the issue in time for launch, forcing a scrub. Afterward, they came to suspect that the problem was due to a faulty sensor rather than a failure of the cooling system itself.

For this attempt, the rules governing the procedure have been rewritten to take account of a wider assortment of data from a variety of sensors — and disregard the readings from the suspect sensor if necessary.

In addition, the cool-down procedure, also known as the “kickstart bleed,” will be conducted during an earlier phase of the fueling process, at about 8 a.m. ET (5 a.m. PT). Mission managers made that change because the procedure worked flawlessly earlier in the countdown during a “Green Run” engine test in March.

Over the past few days, launch pad workers have also fine-tuned and fixed some of the components that caused other concerns during Monday’s countdown — for example, a leak in the rocket’s fuel supply lines.

Technical glitches aren’t the only concerns that could hold up liftoff: Stormy weather could also force a postponement. Forecasters estimate that there’s a 60% chance of acceptable weather at the beginning of Saturday’s launch window, rising to more than 80% by the end of the two-hour window.

PREVIOUSLY: Why the first launch of NASA’s moon rocket is a big deal

If Saturday’s launch attempt has to be called off, the next opportunity would come on Monday or Tuesday. If that opportunity is missed as well, the SLS would have to be rolled back off the launch pad for a test of its flight termination safety system, said Jeremy Parsons, deputy manager of exploration ground systems at Kennedy Space Center.

The Artemis moon program, which takes its name from the mythological moon goddess who was Apollo’s sister, highlights NASA’s leading role in beyond-Earth exploration. That role has been somewhat controversial in recent years, due to the years of delay and the billions of dollars in cost overruns associated with the SLS-Orion program.

A successful mission would arguably raise the space agency’s profile in comparison with commercial space ventures such as SpaceX and Blue Origin, while a not-so-successful mission could intensify the debate over whether NASA should hand over more of its role to those commercial ventures. (SpaceX is already due to provide a lunar lander for the Artemis 3 mission, based on the design of its Starship rocket.)

“Both Blue Origin and SpaceX have been building heavy-lift reusable rockets at their own expense and are already nipping at the heels of the government’s throwaway rocket that receives billions of our tax dollars,” former NASA associate administrator Lori Garver wrote in her recently published memoir, “Escaping Gravity.”