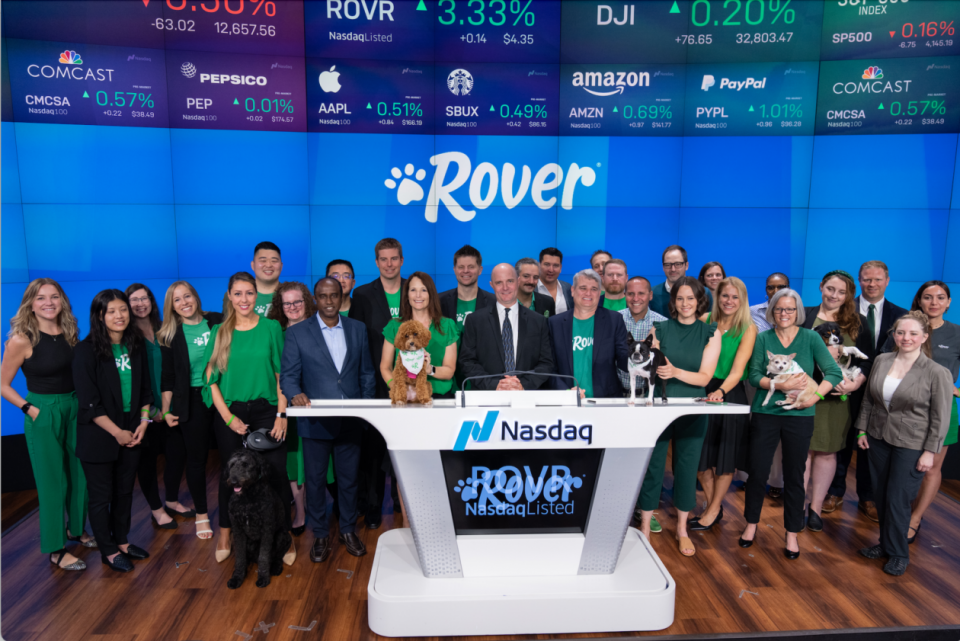 A group of managers, investors, employees — and of course, dogs — from Seattle-based pet care giant Rover descended on Times Square earlier this month to ring the opening bell at Nasdaq’s MarketSite in New York City, a long-awaited milestone delayed by the pandemic.

On one hand, Rover ended its first year as a public company on a high note, achieving profitability and annual revenue growth of 130%. On the other, it comes on the heels of the global pandemic, a period when the company laid off more than 40% of its employees, and an economic downturn that pushed its shares down more than 61% year-to-date.

Here’s what to know as Rover enters its second year as a public company, and 12 years after it launched out of a Seattle hackathon event:

Rover first listed on the Nasdaq in early August 2021. It merged with Nebula Caravel Acquisition Corp, a special-purpose acquisition company sponsored by San Francisco firm True Wind Capital, using the ticker symbol “ROVR.” The merger was announced in February 2021, with a valuation at the time of $1.35 billion.

Rover was among a rush of companies going public via SPAC. Many venture capitalists and hedge fund managers embraced this investment vehicle as a way to make relatively quick returns, taking advantage of low interest rates.

However, with rising interest rates brought on by inflation and the broader market downturn, the SPAC market this year quickly decelerated and confidence from investors has been eroding. A list of companies that went public via SPAC lost more than double that of the S&P 500’s 2022 decline, according to CNBC.

The move to go public provided liquidity to Rover’s employees and injected $325 million onto its balance sheet, with $275 million from the SPAC and $50 million from institutional investors via private investment in a public equity, otherwise known as PIPE financing. The fresh cash was used to fuel its growth ambitions.

Bankers told Rover executives that it could have gone through the traditional IPO process, Easterly said, but the company made the “tactical” move to merge with a SPAC. The investment vehicle guaranteed that the company could raise at least $100 million and not have any “surprises” toward the end of the process, he added.

Investors have been especially critical of Seattle companies that went public via SPAC. Leafly, Nautilus Biotechnology, Porch and Rover have all dropped more than 50% from previous highs.

Rover’s shares closed at $11.29 on its first day of trading, reaching an all-time-high of $14.68 in late September. It started to tumble all the way down to around $3.70 in July and is currently hovering around $4.

“There’s clearly a short-term impact for people, including our employees, that own shares, and the value of those shares,” Easterly said. “And we have a lot of empathy to those dynamics for people who worked for the company for a long time.”

(Use the interactive graphic below to track Rover’s stock price since its year-ago listing.)

Rover currently operates in nine countries, with more than 750,000 pet care providers and a workforce of 489 employees. It also boasts 3 million pet owners and 14 million pet profiles, with a total of 65 million all-time bookings.

Rover’s 12-month revenue was $144 million in the quarter ended June 30, up nearly 130% from $63 million from the year-ago period. Its adjusted EBITDA — earnings before interest, taxes, depreciation and amortization — was $14 million. The company’s current market capitalization is around $735 million.

The pandemic impacted Rover’s business model. People weren’t traveling as much or going into the office, putting a large dent on the demand for pet sitting services. Rover laid off about 200 employees in late March 2020.

In 2021, during its first year as a public company, Rover began its rebound, which was fueled by rising pet adoption rates, increased spending on pets and travel restrictions being lifted.

The pandemic is still causing cancellations, with the company citing mentions of words such as “COVID,” “tested positive” and “sick” between pet owners and service providers on the platform, according to analyst notes provided by J.P. Morgan Chase. The company assumes that its rate of cancellation will be around 14% in the second half of the year, per its guidance.

As the company continues to scale beyond the domestic market, it will face increasing complexities in how it keeps a handle on its operations.

Rover faced backlash last year in an article by CNN Business, which featured several pet owners who dealt with problems using the service and said they didn’t receive adequate support from the company. There have also been more recent reports of animal mistreatment on the platform, ranging from a dog getting hit by a car to another that got stolen.

A company spokesperson said it requires every care provider to pass a background check, among other safeguards, before listing their services on the Rover platform. It also offers 24/7 support to users and up to $25,000 for veterinarian-related costs.

“As a team of pet parents, we recognize that one negative experience is one too many, and we are continually focused on improvements,” the spokesperson said.

A challenge will be maintaining a firm grip on its onboarding process. The culture around privacy, background checks and data is different in Europe, said Charlie Wickers, vice president of finance who will become Rover’s CFO in September.

Rover uses Sterling, a third-party background check company, to handle screenings of its pet sitters. However, it may not be legal in certain geographies to actually perform background checks for certain types of businesses. Wickers said aspects of the screening process will need to be “localized” to adhere to local laws.

Rover will also need to figure out how macroeconomic shocks impact new market geographies. Europe might be more sensitive to energy prices in the fallout of Russia and Ukraine than in the U.S., Easterly said.

Seasonality also plays a role. Whereas the U.S. has travel holidays like Thanksgiving and Christmas, Europe has relatively minimal vacation-related travel. The company is largely dependent on leisure travel as part of its business model.

Analysts also say that leisure travel could also slow due to macro headwinds, and the lack of return-to-office plans for employees could also stunt Rover’s daytime services growth.

The competition is much more fragmented in Europe, with more of a diversity of business models to compete with from companies including Gudog, BorrowMyDoggy, Pawshake, Tailster and Trusted Housesitters.

Its domestic rival Wag is set to go public later this year. Easterly said that having two publicly traded companies with marketplaces for pet care could be a positive sign for the nascent industry because it will create more market awareness.

Easterly said that the pet care industry has traditionally been recession proof. The market is also growing, pet care spending is expected to reach $230 billion by 2030, according to market research.

Another potential step in the company’s evolution relates to new policy in the U.S. market.

The Seattle City Council in late May unanimously passed regulatory framework to create protections for gig workers who deliver meals, groceries and packages, and some on-demand service providers. The bill in part is designed to provide gig workers with minimum wage.

Rover was not among the companies included in the policy, but lawmakers are working on new policies to address the service. Easterly said that Rover is inherently different than other gig economy jobs such as Uber or Instacart because pet sitting does not demand as much attention.

“You can have a dog in your house and still have another job,” he said. “That’s fundamentally different than most gig economies. If you’re driving an Uber, you shouldn’t be doing another job simultaneously.”

From the early days of Rover, company leaders were confident that it could become a public company. Easterly notes that 90% of the opportunity in the pet care market comes from people who use friends, family and neighbors, not those looking for commercial solutions.

Revolutionizing that type of change in behavior, however, would be a gradual change over years, if not decades, he said.