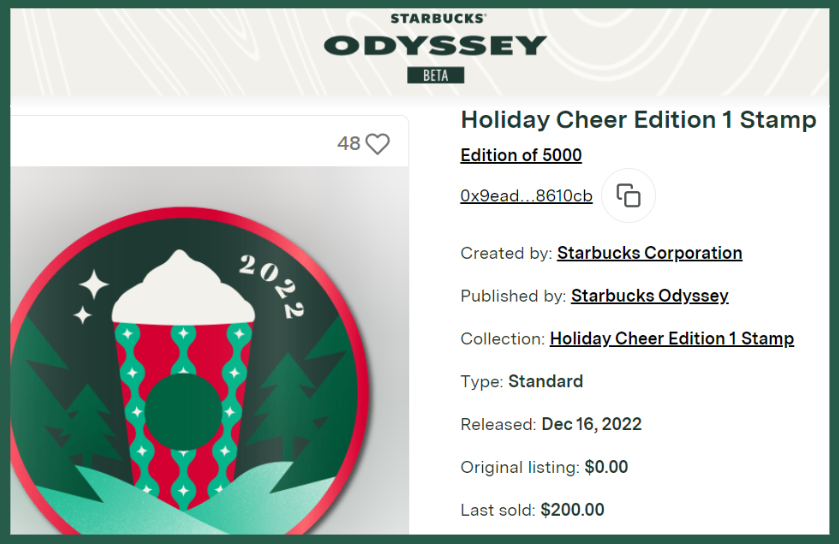 With my first Starbucks Odyssey “journey” complete, and Holiday Cheer Edition 1 Stamp #4883 secure in my digital wallet, I gazed with pride at the graphical icon of a Starbucks holiday cup nestled among the trees beneath two twinkling stars, with the sweet satisfaction of virtual accomplishment coursing through my veins.

Then I sold it.

The stamp went for $89 on the Nifty Gateway NFT marketplace, netting me about $79 after fees — just about enough to cover the gift card and coffee that I’ve purchased on a different Starbucks Odyssey journey.

The next day, someone else sold a Holiday Cheer stamp for $150. Then another went for $200.

That was eye-opening! If I can keep up my coffee-buying streak for another two weeks, I’ll complete my next journey and receive the Starbucks Coffee Heritage stamp. I think I’ll keep that one.*

At this point, you’re probably wondering, what the heck is this guy talking about? All of this is entirely new to me, as well. So let’s take a step back.

Starbucks Odyssey is an extension of the Starbucks Rewards loyalty program. Announced in September, it started rolling out Dec. 8 as a beta to a small group of Starbucks Rewards members who signed up for a waitlist. Starbucks says it will start making Odyssey available to more people on the waitlist in January.

The initiative is a way for Starbucks to improve engagement with customers, in the long-term interest of its business. In the short-term, as I learned, it will also cause some customers to spend more with Starbucks than they normally would.

For fans of Starbucks, it’s a way to feel more connected to one of their favorite brands, gain access to special perks, and potentially make a little money in the process.

Behind the scenes, this is the coffee giant’s move into Web3, including blockchain and NFTs, or non-fungible tokens. Don’t worry: you don’t need to know anything about the technology, or even the lingo, to take part.

Starbucks refers to the NFTs as stamps. Blockchain technology is what makes it possible to identify and track specific stamps, allowing them to be sold and transferred to someone else in transactions visible on a public ledger.

The main focus of Starbucks Odyssey is a series of journeys, each involving a series of tasks of varying difficulty. There are two journeys so far in the beta. For example, completing the Holiday Cheer Journey requires:

With each completed task, you take an additional step in the journey, and add to your overall points total.

There are three points levels in the beta (1000 to 2999 points; 3000 to 5999 points; and 6000+ points) that will unlock future benefits. Starbucks has yet to reveal the benefits but says examples may include virtual classes, access to limited merchandise, and invitations to exclusive events or trips at the highest levels.

It’s not yet clear, however, if people will receive free merch or simply the privilege of paying for stuff that other people don’t have access to buy.

I was pleasantly surprised to see that I was able to keep the 125 Starbucks Odyssey points that I received for earning the Holiday Cheer stamp even after selling the NFT.

One barista I was chatting with at my local Starbucks likened Odyssey to “Pokémon GO for coffee.” It’s not a perfect comparison, but there are similarities in the way Odyssey blends and bridges the physical and virtual worlds.

This is especially evident in the Coffee Heritage Journey. In addition to a Starbucks history trivia challenge, and a picture puzzle featuring the original Starbucks store, this journey includes what I consider the two most interesting aspects of Starbucks Odyssey journeys so far:

This tour is well-done, featuring vivid imagery and drone footage, and short video clips in which an engaging tour guide explains the ins and outs of growing, harvesting, and roasting coffee. Completing this task requires answering a multiple-choice question, the answer to which is revealed toward the end of the tour.

This is notable as a direct tie-in to the Starbucks business. I’m an occasional Starbucks customer, and this journey has turned me into a regular one, at least temporarily.

NFTs as a marketing strategy

This is where the business potential of NFTs starts to become clear.

Although the buzz and hype over the technology has faded, Starbucks decided to take its time to develop a more strategic approach, as Brady Brewer, Starbucks’ chief marketing officer, told me in September.

“As many brands just jumped right in, we saw a longer-term potential for this technology rather than a one-off,” Brewer said at the time. “We were thinking, how can it augment not just our customer experience but our core business, rather than something that would be on the side.”

Apart from missing the peak of the NFT craze, Starbucks faces the risk that launching what amounts to an elaborate marketing game might seem frivolous as workers at hundreds of Starbucks locations vote to unionize in their own quest for better working conditions.

The company hopes that employees (“partners,” in Starbucks terminology) will help to build and participate in the Starbucks Odyssey community, and it’s prioritizing them in the beta waitlist.

While employees who host online learning sessions for Odyssey participants, would be on the clock, for example, their general participation in the Odyssey community would be “more for fun and engagement,” Brewer said in the earlier interview.

For now, what’s missing from the beta experience is a sense of community, including the ability to interact and engage with other members. Starbucks says that’s coming in the future.

For my part, I’d love to be able to talk with (and interview) “superman,” the Nifty Gateway user who purchased my Holiday Cheer stamp earlier this week. I haven’t been able to figure out how to do this.

In the meantime, the experience has given me a better sense for the appeal of NFTs. I wish I’d held onto that Holiday Cheer stamp a little longer, and not just because the price has gone up.

Yes, I know, it was just an image, pixels on a screen. But in a larger sense, it was an icon of my journey over the past two weeks, everything I learned along the way, and the effort that went into earning it.

Look for me in line next week at the local Starbucks in my quest for the next one.

* Starbucks provided me with access to the Odyssey beta, based on my request to try it out for purposes of writing this first-hand account. I’m planning to give away the proceeds from my sale of stamps as tips to Starbucks baristas, unless someone has a better idea for what to do with the money. Let me know: [email protected].