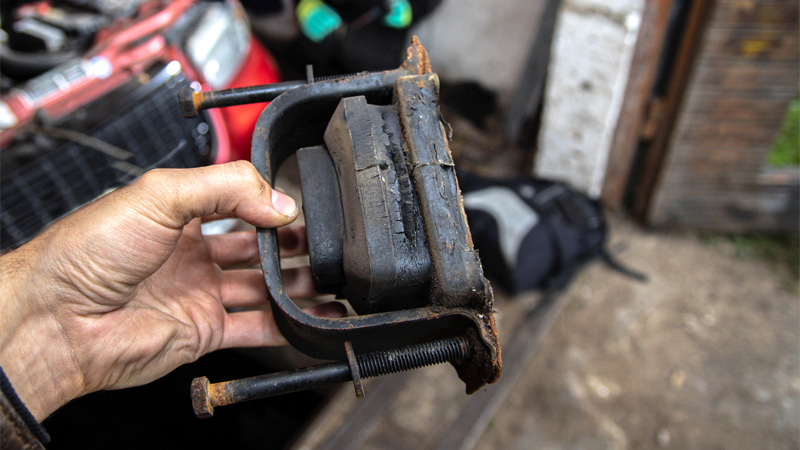 As motorists, we often think about the value of our vehicles’ engines and transmissions. After all, a critical malfunction related to either of these essential components can quickly leave us stranded without recourse.

However, we seldom give the same consideration to various structural components that are responsible for supporting the critical components listed above.

Of significant importance are a vehicle’s engine or motor mounts. These specialized assemblies support an engine’s weight, while also preventing engine-related vibration from being transmitted to a vehicle’s chassis. A vehicle’s engine mounts, along with its transmission mounts, are among the most important of all powertrain structural support components.

When an engine mount fails, a number of symptoms and secondary issues can arise, thereby causing a great deal of issues. Luckily, in many instances, the bulk of these symptoms prove relatively simple to isolate, thereby allowing one to get a jump-start on making all necessary repairs.

Read on to learn more about the various symptoms associated with a faulty engine mount.

What is an Engine Mount? 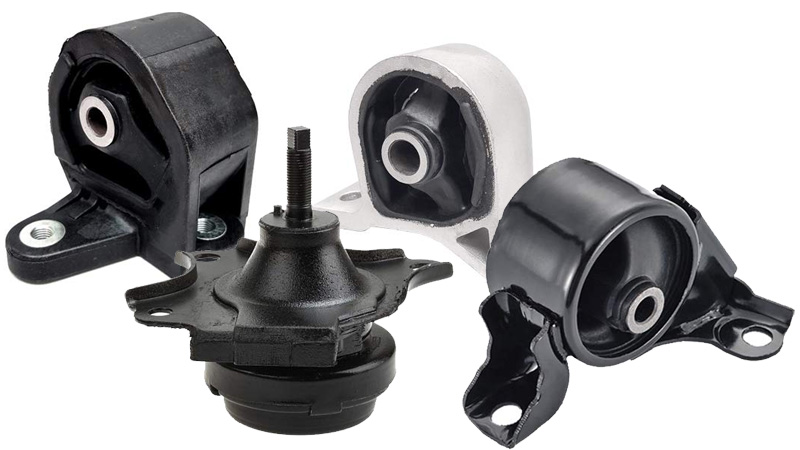 An engine mount is a device that retains an engine’s position within a vehicle’s engine bay, free of any unnecessary slop or movement.

Engine mounts come in a wide array of styles and configurations, depending upon the make and model of the vehicle to which it is affixed. However, the bulk of engine mounts all share a few key characteristics.

The vast majority of today’s engine mounts feature some type of rubber isolator within their design, and bolt between the engine itself, and a defined point-of-mount along a vehicle’s rigid structural supports.

While the manner in which an engine mount is affixed in place prevents excess engine movement, the included isolator prevents engine-to-chassis vibration transmission.

How Many Mounts Does a Vehicle Have?

While most engines utilize a total of 2-3 motor mounts, the majority of today’s transmissions are supported by only a single transmission mount. However, the exact number of engine and transmission mounts used in a specific application varies from one particular make and model of vehicle to the next.

Signs of a Bad Motor Mount

The presence of a faulty, worn, or otherwise damaged motor mount is often associated with several secondary symptoms, some of which tend to be more severe in nature than others. Learning to recognize these symptoms can prove valuable when attempting to expedite the matter of repair.

The following are several of the most common symptoms known to accompany a bad motor mount. 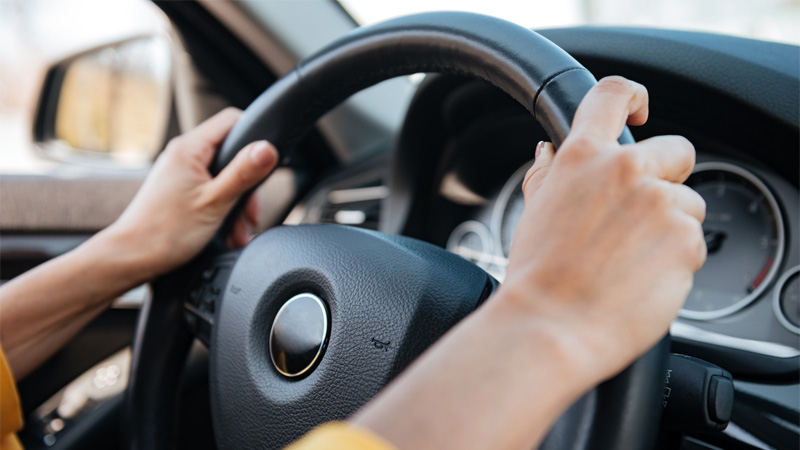 As motor mounts begin to wear, one can often notice a significant increase in engine vibration will will make itself known inside the cabin and through the steering wheel.

This is attributed to a lack of damping qualities that become characteristic of engine mounts as they begin to degrade. In most cases, this vibration will only increase in severity as wear progresses.

As motor mounts begin to wear, and free-play increases, it is not uncommon to hear harsh “clunking” or “thumping” noises. These noises arise when an engine’s weight is allowed to shift considerably under acceleration.

Again, symptoms of this nature typically worsen with time.

When one or more of a vehicle’s engine mounts begin to wear, one will often notice a shifting sensation coming from their vehicle’s front end under acceleration. This results from excessive engine/transmission shifts during periods of heavy powertrain stress.

In many instances, this increased movement will cause progressive wear of all remaining engine mounts.

Under the most severe of circumstances, a vehicle’s engine can actually become damaged, if allowed to move excessively due to motor mount degradation. This results when an engine is allowed to make contact with a vehicle’s frame, sub-frame, or other structural components.

Damage of this type can be costly to repair, and can even render an engine inoperable.

What Causes Engine Mounts to Fail?

Engine mounts typically fail at the hands of standard wear and tear. Over the course of time, an engine mount’s rubber isolators begin to dry-rot, crack, and degrade, leaving them far less capable of limiting excess engine vibration and travel. When this occurs, the need for replacement becomes inevitable.

Also of note, is the fact that once one engine mount begins to deteriorate in condition, it is relatively common for an engine’s additional engine mounts to follow shortly thereafter. This issue is in large part to the additional stress placed upon all remaining engine mounts, one particular mount has begun to degrade.

How Long Do Engine Mounts Last? 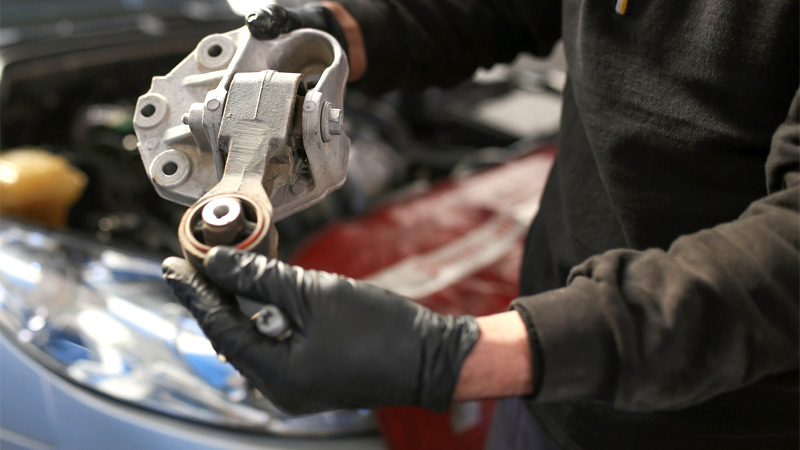 On average, one can expect the engine’s motor mounts to last for approximately 5-10 years, before ultimately requiring replacement. However, it is worth mentioning that some motor mounts have a tendency to last significantly longer, even remaining in satisfactory condition for the entirety of a vehicle’s service life, under certain circumstances.

A number of variables also come into play when attempting to estimate an engine or motor mount’s longevity. The most pertinent of these variables is the surface conditions of the roadways that a vehicle primarily travels.

Engine mounts will naturally last longer when a vehicle is used for highway cruising, rather than when cruising pothole-riddled city streets.

Can You Continue Driving With a Broken Motor Mount

It is never ideal to drive for any further distance than is absolutely necessary with a broken motor mount. While the failure of a single engine mount might not spell disaster, continued driving will only increase the likelihood of additional engine mount failure.

In the event that more than one of an engine’s mounts were to fail at a time, the increase in stress upon a vehicle’s drivetrain would be significant.

In any event, a failed motor mount should be diagnosed, isolated, and replaced as soon as possible. Doing so will substantially reduce the chance of successive motor mount failure, and reduce the likelihood of secondary symptoms from arising.

If you do not feel comfortable tackling such repairs yourself, an appointment should be made with a trusted service center at the first available opportunity.

Should Engine Mounts Have Play?

All engine mounts typically have a predetermined amount of play. However, this play should be minimal in nature.

This play can be attributed to automakers’ use of rubberized bushings within the vast majority of motor mounts, and the variable amount of give or play that they naturally have when stressed.

Nonetheless, any abnormal amount of play, or substantial engine movement under high RPM throttle actuation should be cause for immediate concern. Play to this extent is typically indicative of one or more degraded motor mounts. This degradation allows additional engine movement that would otherwise not be present. 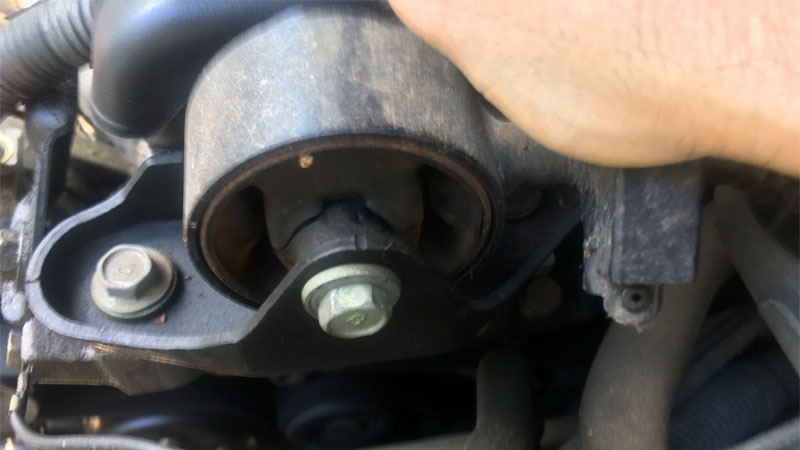 On average, one can expect to pay between $200-$500 to have a vehicle’s engine mount replaced. However, in rare cases, this cost can be even higher. Of this price, approximately $30-$100 is attributed to parts cost, while roughly $170-$400 results from labor-related expenses.

There are also a number of variables that factor into the overall cost of engine mount replacement.

Some of the most notable of these variables include the make/model of the affected vehicle, the amount of time required to replace the mount in question, and the hourly labor rate of the particular shop that is chosen to complete such work.

Can You Replace Motor Mounts Yourself?

Engine mounts can be successfully replaced by any DIY mechanic, assuming that they have the proper knowledge and tools at their disposal. Tackling such repairs will require the use of a floor jack, jack stands, a 2×2 wooden block, and basic hand tools.

One must also stay vigilant when supporting their vehicle’s engine with a jack, to prevent inadvertent oil pan damage.

The replacement of one or more motor mounts generally involves supporting a vehicle’s engine using a floor jack, a wooden block (used to disperse pressure), and jack stands (to act as a safety failsafe) before ultimately unbolting and removing the affected motor mount.

Once removed, a new motor mount can be installed and torqued to specification, before removing the above-mentioned floor jack.

Should All Motor Mounts Be Replaced at the Same Time?

As previously mentioned, it is not uncommon for a vehicle’s additional motor mounts to fail in rapid succession, following the initial failure of one existing motor mount.

This results from the additional strain placed upon all remaining motor mounts. This warrants further consideration when attempting to determine how many of your engine’s motor mounts to replace at once.

Generally speaking, it is always best to replace all of an engine’s motor mounts at the same time. This ensures that the rigidity of all mounts is identical and that no particular motor mount is put under any more stress than its companions. This, in the long run, should reduce the additional expenditure of both time and effort in the future.

How Long Does it Take to Change Tires? — Auto Trends Magazine