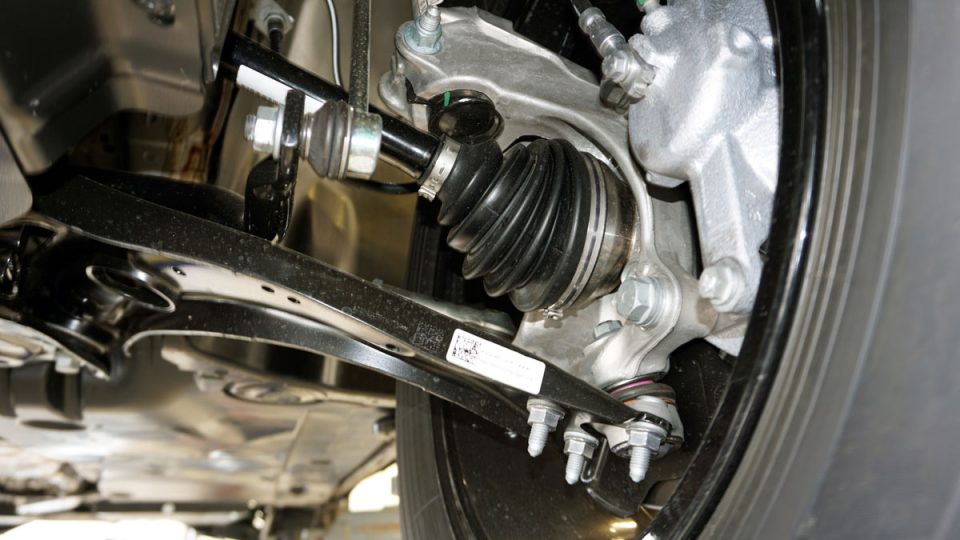 Some of the most critical, yet often overlooked of all mechanical components are those contained within a vehicle’s steering and suspension systems. These components are not only key to efficient vehicle operation, but serve an essential role in ensuring safe travels. However, in order to operate as intended, each of these components must be maintained in optimal condition.

One of the most valuable of all steering and suspension-related components is a vehicle’s control arms. These assemblies ultimately serve to couple a vehicle’s front wheels to their respective frame mounts. Control arms also allow a vehicle’s wheels to pivot up and down, with respect to the fixed position of the frame itself.

Understanding this fact, it stands to reason that the replacement of aging or failing control arms is of extreme importance. Furthermore, this replacement must be conducted in a timely manner. Luckily, one or more symptoms often present themselves when a control arm starts to become worse for wear, thereby alerting motorists to the need for such repair.

Read on to learn more about the various symptoms associated with a bad control arm, as well as what one can expect to pay when having their vehicle’s control arms replaced.

What Is a Control Arm on a Car?

A control arm is a critical component of a vehicle’s steering/suspension system. This component is affixed to an outboard-mounted hub at one end, and a vehicle’s frame at its opposing end. Bushings are positioned within a control arm’s frame mounts, thereby preventing excessive wear under continuous movement.

A vehicle’s control arms allow each front wheel to move vertically, in retaliation to the vehicle’s frame. This movement is cushioned via the use of specialty shocks/struts, which provide a ride free of harsh vibration. At its outer end, a control arm is connected to its corresponding wheel hub via a pivoting fixture, known as a ball joint.

Many trucks and SUVs feature both upper and lower control arms, which operate in tandem to secure the hub to which they are affixed. On the contrary, some sedans feature only lower control arms. The exact dimensions of a control arm often differ from one model of vehicle to the next. 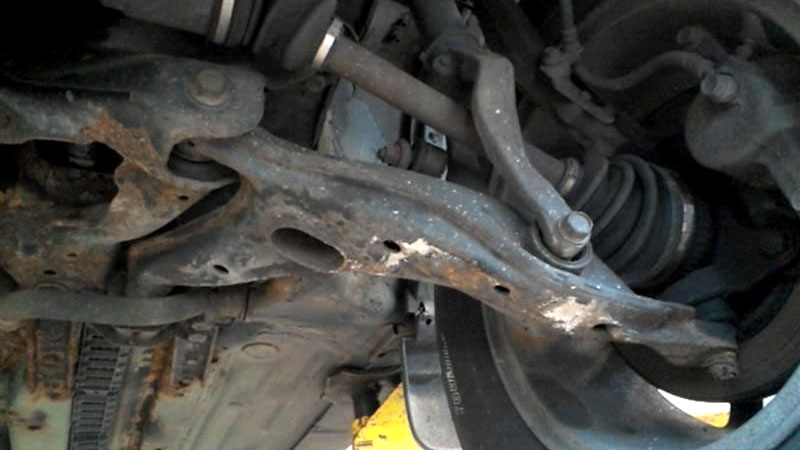 A bad control arm often presents a number of secondary symptoms, some of which tend to be more pronounced than others. Recognizing these symptoms can prove extremely valuable when attempting to diagnose the issue at hand.

The following are several of the most common symptoms associated with a faulty control arm.

In many cases, abnormal noises coming from beneath a vehicle’s front end often serve as the first sign of control arm fatigue.

These noises tend to be most audible when traveling over bumps or uneven terrain, and often sound like popping, clacking, or metallic clicking. These noises are sometimes similar to that of CV joint failure.

Another prominent sign of excessive control arm wear is uneven or irregular tire wear. This wear often manifests toward the inner or outer edges of a tire’s tread, yet can also extend across the entire surface of a tire’s tread.

This can lead to unnecessary expenditure when forced to replace tires prematurely.

In severe cases, worn control arms can cause a vehicle’s steering to be unresponsive or unstable, providing unsatisfactory cornering abilities and underwhelming straight-line performance.

This often forces a motorist to make steering corrections far more frequently than would otherwise be necessary.

Yet another symptom of a bad control arm is excessive vibration that can easily be felt by a vehicle’s occupants. This vibration is often described as a continuous shutter or shimmy that often fluctuates in intensity with speed.

This vibration only tends to worsen as control arm wear progresses. Excessive shaking or vibration can also signify bad motor mounts among other things.

What Causes a Control Arm to Fail? 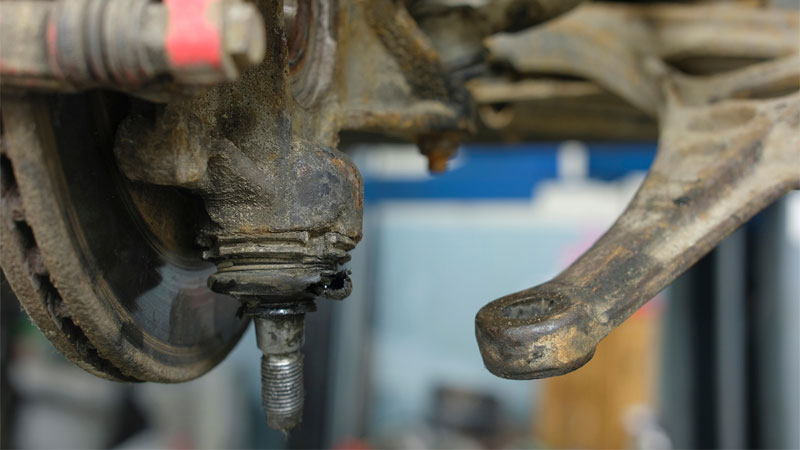 Control arms can fail for a number of reasons, including standard wear/tear, and structural damage. While continuous movement throughout a vehicle’s lifetime can structurally compromise a vehicle’s control arms, abuse often tends to be such a component’s undoing.

From striking a curb, to center-punching a problematic pothole, there are numerous roadway hazards that can put an end to even the heartiest of control arms.

The damage from such a blow is only magnified if a control arm has already logged a substantial number of miles over the course of its service life. Under such circumstances, a strike of this type is often the final straw.

Can You Drive With a Bad Control Arm?

Knowingly that operating a vehicle with a bad or faulty control arm is never advised, and should not be attempted under any circumstances. Driving in this manner is not only counterproductive but is extremely dangerous as well.

This stems from the structural nature of the control arm itself. Control arms serve as a direct link between a vehicle’s wheel end and frame. Any separation of this link while in transit can be deadly.

If a control arm were to completely fail while in service, steering would become erratic at best, potentially causing a wreck at any speed. Additionally, the likelihood of secondary damage to one’s vehicle due to such a failure is quite great.

Any number of critical steering or suspension components can be irreversibly damaged during the course of an “at-speed” control arm failure.

Can Control Arms Cause “Death Wobble”?

The presence of any loose steering or suspension components beneath a vehicle’s front end can serve as a definite catalyst for “death wobble”.

The term “death wobble” is commonly used to describe a violent shaking or oscillating that is known to occur in the front end of various vehicles at a wide array of speeds. This condition can be extremely concerning for all who are along for the ride.

The truth is, the presence of excess play within any front end component can cause death wobble to occur, including that which is presented by a compromised control arm. Additionally, deteriorated bushings or loose/damaged control arm mounting bolts can also be to blame.

Under such circumstances, the underlying cause of such issues must be corrected, in order to alleviate death wobble as a whole. 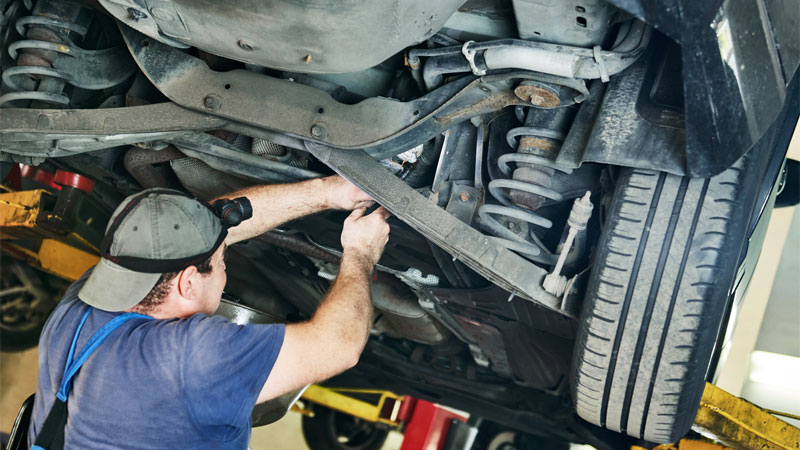 The price of control arm replacement tends to vary significantly from one make and model of vehicle to the next. This stems primarily from discrepancies between the number of labor hours required to replace a control arm, as well as the cost of the control arm itself.

Variations in the going labor rate between shops also tend to factor in quite heavily. Because of this, the cost of replacement will typically be higher at a car dealership service center compared to an independent mechanic.

All things considered, one can expect to pay somewhere in the neighborhood of $150-$400 to have a single control arm replaced, though this price can tally significantly higher under certain circumstances. Based on these numbers, one is likely to spend an average of $300-$800 to have their vehicle’s control arms replaced as a pair.

Should Control Arms Be Replaced In Pairs?

Replacing vehicle control arms in pairs is generally considered to be a sound practice, for a number of reasons.

The first, and perhaps most important of these reasons is the fact that each control arm found on a particular vehicle tends to exhibit nearly identical wear. Simply put, if one control arm on a given vehicle has been condemned due to wear, its mate is likely soon to follow.

Additionally, the practice of replacing control arms as a pair ensures that differential in free-play between a vehicle’s opposing control arms is kept to a minimum. In essence, no one front wheel end possesses any greater degree of free-play than the other.

This, in turn, keeps any handling-related irregularities to a bare minimum.

Is an Alignment Necessary After Replacement?

The act of replacing one or more of a vehicle’s control arms does not actually necessitate the cost of having an alignment done. This is due to the fact that no critical points of adjustment are maintained via the control arm itself.

Quite the contrary, a control arm could be most easily classified as a solid state component, requiring no individual adjustment to caster, camber, or toe.

However, if the need to replace your vehicle’s control arm has arisen due to an impact of any type, an alignment would be a worthy investment.

This is since the same impact that is capable of damaging a control arm is also quite capable of compromising a number of additional front end components, many of which are absolutely critical to a vehicle’s steering geometry.

bitchy | Drew Barrymore doesn’t buy Xmas gifts for her kids, takes them on a trip instead

Chess Club is making all the right moves in Seattle, attracting players to lively venues across the city – GeekWire