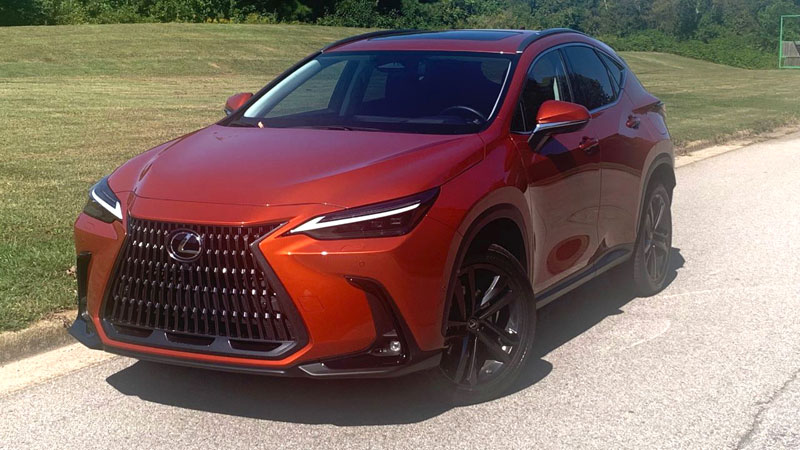 Lexus’ compact NX was overhauled in 2022 and carries forward for 2023. Its style, amenities, and safety features are among its strong suits, while a pair of hybrid choices set this model apart in a crowded segment.

Our test plug-in hybrid model blends performance with efficiency, a combination that we believe gives it a winning edge.

Lexus NX plug-in hybrid shoppers may be eligible for a $7,500 federal tax credit as well as for any state or local rebates and incentives. Check with your Lexus dealer for more information.

The NX is also available in NX 250 and NX 350 gas models. There are eight configurations available with prices ranging from $39,755 to $51,915.  For the sake of this review, our comments involve the plug-in hybrid except where noted. 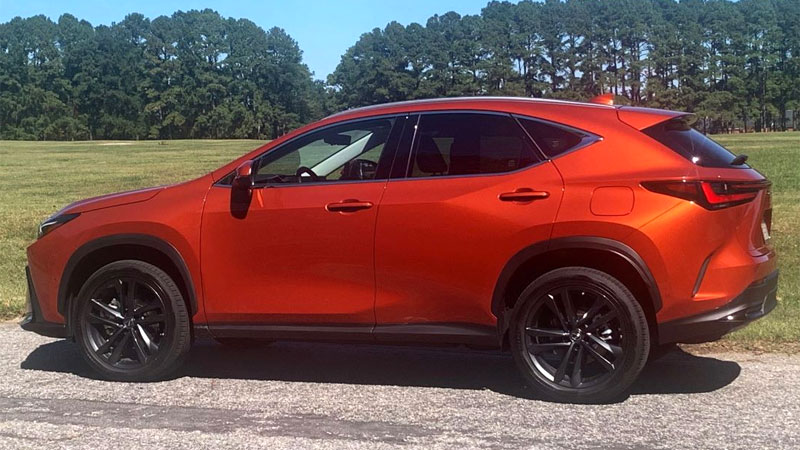 The latest Lexus NX is 1.2 inches longer between the wheels, but just under an inch longer overall than its predecessor. It is slightly narrower, but we credit that to a less chunky design than before.

The current model is nicely executed with a better-fitting spindle grille, sleek headlamps, and less dramatic signature lines and body sculpting. But it hasn’t lost its flair for the dramatic as evidenced by its beefy taillamps. The new NX seems much more like a tall hatchback than before. 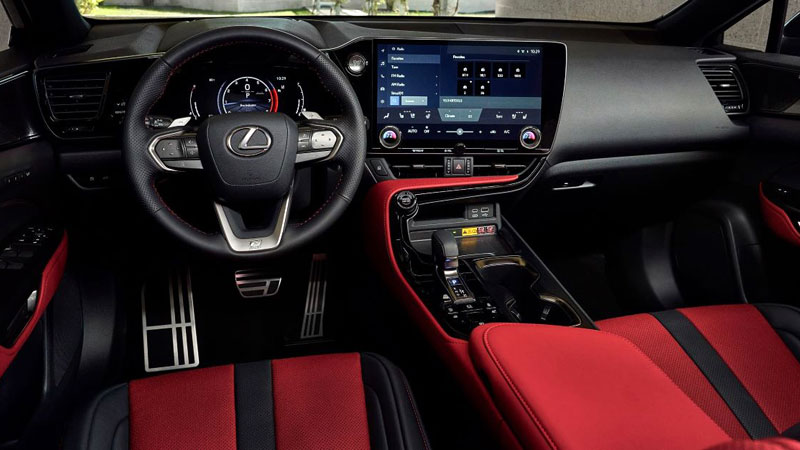 The NX 450h+ in its various forms offers a luxurious cabin with rich materials and excellent build quality. We could fault the first-generation NX with being not much more than a fancy derivative of the Toyota RAV4, its platform-mate. But with the release of the second-generation model in 2022, the two are much further separated.

The latest model is also cleaner than before. Until recently, Lexus equated luxury with overwrought and confusing cabin controls that overwhelmed the interior. The new design is streamlined with the Remote Touch controller gone and normal buttons and switches found.

To say that the previous arrangement was despised by critics would be an accurate statement.

We’ll agree with Lexus that the NX seats five. But we’re still relegating youngsters to the back row as hip and shoulder room is tight for a trio of adults. The rear legroom is just a few inches less than the front row, while the headroom is roomy front and back.

The cargo compartment offers a larger standard hold than before, but with the rear seat folded, there is less room now. 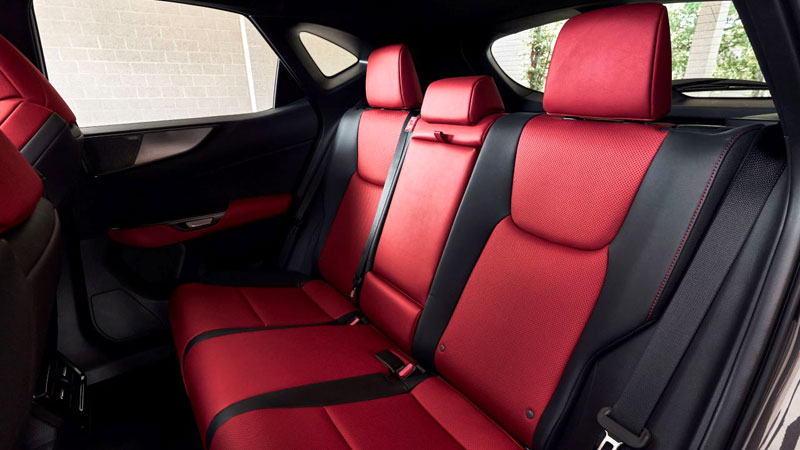 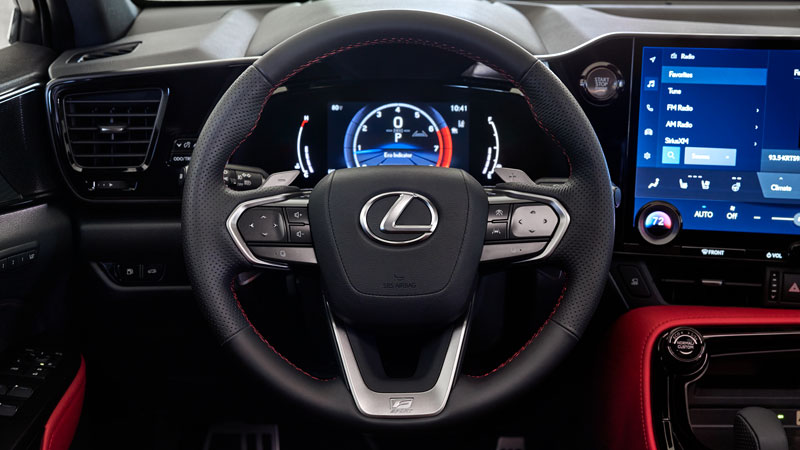 A 14-inch multimedia display is a welcome improvement over the previous arrangement. This screen offers touch control and is better organized than before.

Still, even with touchscreen access, the screen isn’t as intuitive as those offered by Genesis, Lincoln, and Cadillac. Lexus has some work to do, but we’re pleased with its improved usability and clean layout.

Among the many other features available include a Wi-Fi hotspot, Lexus voice control, Bluetooth, satellite radio, wireless Android Auto, and wireless Apple CarPlay. A 10-speaker sound system and a 10-inch head-up display are incorporated.

Oddly, a wireless charger is bundled with digital key access to form a $450 package upgrade. A pad, at least, is often offered in a vehicle costing half as much.

Powering every NX 450h+ is a 2.5-liter four-cylinder engine with 181 horsepower. It works with two electric generators (motors) to shuttle power to all four wheels, giving this model standard all-wheel drive. A third electric motor works primarily with the starter and charges the hybrid battery.

Under full throttle or when the gas engine and electric motors work concurrently, this model puts down an impressive 302 horsepower. A continuously variable automatic transmission is included.

The NX 450h+ can run on electric power only for up to 37 miles. When its battery pack has been exhausted, this crossover keeps going if there is enough gas in the fuel tank. This SUV averages 37 mpg and has a 2,000-pound towing capacity when properly equipped.

Thanks to an onboard charger, the NX 450h+ charges overnight when connected to a 120-volt home outlet. Upgrade to a 240-volt outlet or use a public charger and the battery system is fully replenished in 4.5 hours. Opt for the upgraded onboard charger ($800) and a full charge is possible within 2.5 hours. 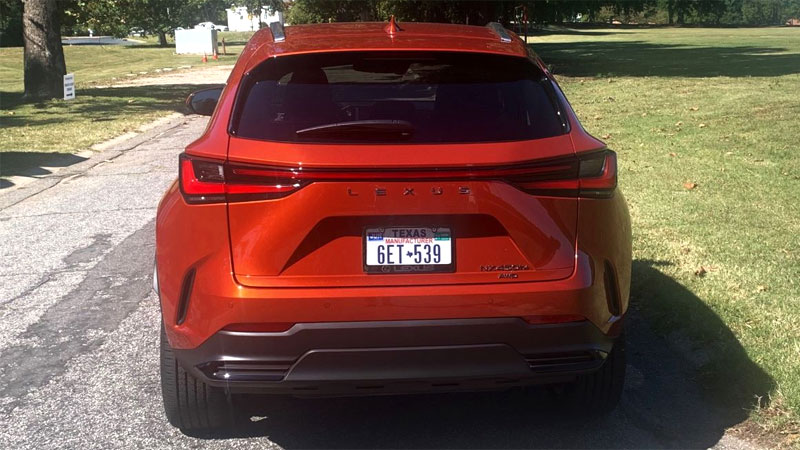 Under normal acceleration, the NX moves forward steadily and quietly. Provided the battery system has power as that’s the default motivator. Otherwise, the Lexus pulls power from the gas engine. The transition is seamless and both systems work in unison when needed.

We enjoyed the full thrust delivered when the two systems worked together. Normally, a CVT would subtract from the experience, forcing the engine to whine. Credit the robust batteries for offsetting that sensation.

Lexus’ performance models offer precise steering and excellent handling. We’ve noticed in recent years that steering has improved with all Lexus utility vehicles, including the NX.

The NX isn’t as agile as Lexus’ performance models, but it also doesn’t supply a vacuous driving experience typical of earlier hybrids. This model is maneuverable, experiences limited body roll when turning, and offers a comfortable ride except on washboard surfaces.

The federal tax credit closes most of the price gap between the plug-in and conventional hybrid. That credit effectively eliminates the difference between the two, with the PHEV running on electric power only for up to 37 miles.

For an additional $1,250, the F Sport adds the mentioned upgrades along with an adaptive variable suspension system for improved handling.  This system is ideal for any owner desiring performance-oriented driving on demand but without a power upgrade to the engine and hybrid systems.

Matt has maintained his love for cars ever since his father taught him kicking tires can be one way to uncover a problem with a vehicle’s suspension system. He since moved on to learn a few things about coefficient of drag, G-forces, toe-heel shifting, and how to work the crazy infotainment system in some random weekly driver. Matt is a member of the Washington Automotive Press Association and is a contributor to various print and online media sources.